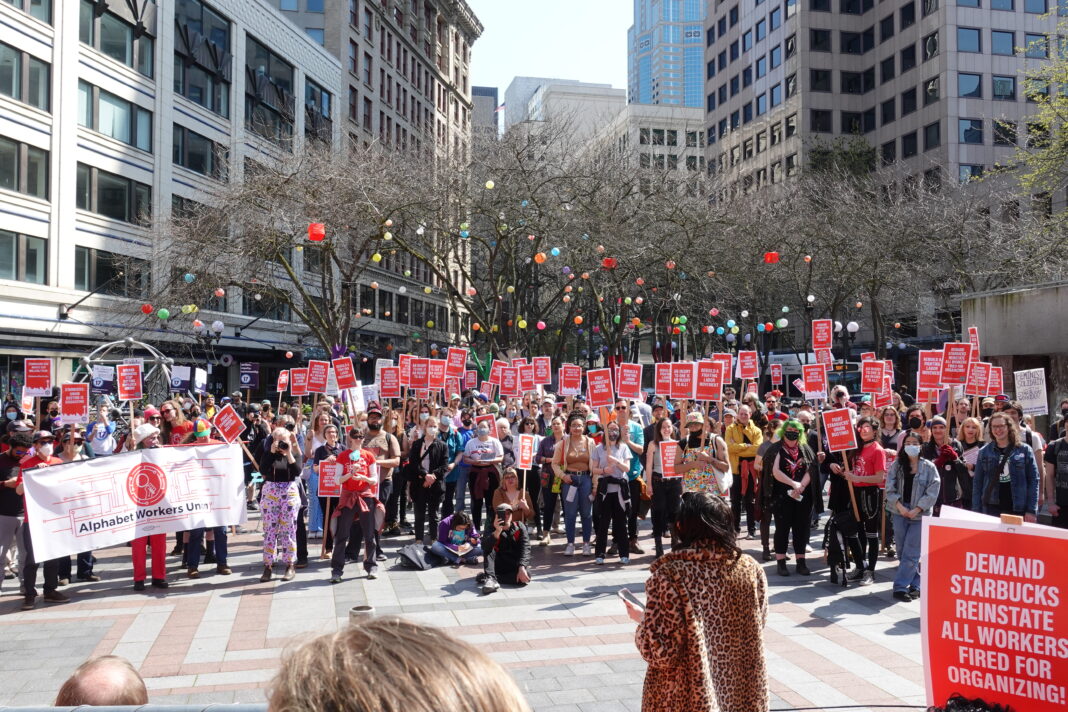 Starbucks workers from around the country rallied alongside socialists, union members, and hundreds of working people in Seattle on April 23, demanding reinstatement for all workers who have been fired by the company in retaliation for organizing a union. The “Fight Starbucks’ Union Busting” rally and march was called by Seattle Starbucks Workers United, Socialist Alternative, and Councilmember Kshama Sawant.

Among the speakers at the rally was Laila Dalton, a Starbucks worker fired earlier this month in Phoenix for organizing a union at her store. After going public with the union effort, Dalton was harassed for months by management. She was fired after she recorded management’s abusive conduct and released it to the media, exposing Starbucks’ illegal union-busting tactics.

Starbucks then turned its sights on Alyssa Sanchez, another union supporter at the same unionizing Phoenix store. When management found out that Sanchez was a union supporter, they began scheduling her to work on days when they knew she was not available. Then Starbucks fired her for being unavailable to work on those days. It was a transparent set-up.

“We sell our lives, we sell our bodies, we sell our time to this company. So why not earn a living wage for the life that we give into the company?” Sanchez said at the rally. “There are millions of other people going through the same thing in other industries. This [movement] is the start of a new era.”

Dalton and Sanchez spoke in Seattle’s Cal Anderson Park alongside Beto Sanchez and LaKota McGlawn, members of the “Memphis 7”, a group of workers who faced retaliatory firings from Starbucks this February in Memphis. Also speaking at the rally were Starbucks workers from Kansas, Michigan, New York, and Washington. Starbucks workers, Socialist Alternative members, and union activists built for the rally through phone banking, putting up posters around the city, and setting up tables on the street to talk with other working people.

The Starbucks unionization movement has spread to more than 200 Starbucks stores in more than 30 states. On April 21, a majority of workers at the Seattle Reserve Roastery, one of only three Reserve Roasteries in the United States, voted to unionize. 33 stores around the country have now voted to join Starbucks Workers United.

Seattle workers are demanding free and improved healthcare for all employees nationally, full staffing, the ability to receive tips from debit and credit card transactions, and an immediate end to Starbucks’ union busting. Some workers have called for a starting wage of $25 per hour, which would mirror the Amazon Labor Union, whose demand for a $30 starting wage galvanized workers to join the struggle and vote “yes” on the union at JFK8 in Staten Island.

Starbucks nearly quadrupled its profits to more than $4 billion last year, and its CEO got an almost 40% raise. Most workers, in contrast, saw a pay cut relative to inflation.

Starbucks has responded to the union movement by waging a vicious anti-union campaign. The company has dramatically cut employees’ hours in an attempt to force pro-union workers to quit. Executives and management have systematically intimidated and retaliated against pro-union workers.

“There are two sides to this fight,” Marie O’Toole, a Starbucks worker from New York City said at the rally. “On one side…you have the Starbucks bosses. On the other side, you have the Starbucks workers, who are united and willing to fight for the things that we need — things like a $20 starting wage tied to inflation, healthcare from day one that includes gender-affirming and mental healthcare, guaranteed hours, fully staffed stores, an end to the retaliatory firings, and immediate reinstatement of all workers who have been fired for organizing!”

Major unions endorsed Saturday’s rally, including the Martin Luther King County Labor Council, a labor federation that represents more than 150 unions in Seattle. In many cases, rank-and-file union members won their union’s endorsement by organizing with co-workers and passing resolutions at union meetings.

“The labor movement needs a fighting approach,” said Matthew Maley, a Socialist Alternative member and a rank-and-file union educator in Seattle, who co-authored a resolution that passed overwhelmingly in the Seattle Education Association to endorse the rally. “That means building mass rallies, marches, walkouts, and strike actions. It means rank-and-file led and democratically organized unions, where members are encouraged to get active, to participate in discussion and debate, and to hold elected leaders accountable to the needs of not only their members, but the wider working class.”

Large contingents came to the rally from IBEW Local 46 (the electricians’ union), the Seattle Education Association, UAW Local 4121 (a union of academic workers at the University of Washington), PROTEC 17 (city employees), the Alphabet Workers Union, Socialist Alternative, and the Seattle Democratic Socialists of America.

The National Labor Relations Board (NLRB) took action on Friday, on the eve of the Seattle rally, to expedite the reinstatement of the workers that Starbucks has retaliated against.

In past cases, the NLRB has taken 10 months or more to reinstate fired workers. The NLRB was created by Democrats in the 1930s in an attempt to contain class struggle and prevent strikes. Despite appearing as a neutral body between labor and capital, it has consistently failed workers and served the bosses by either denying justice for workers entirely or delaying it to the point that bosses have learned that they can get away with union busting for months or years without facing consequences. The NLRB is often a graveyard for complaints by unions against illegal activity by employers.

But under the pressure of strikes, demonstrations, and mass unionization campaigns at both Starbucks and Amazon, the board has been forced to take action more quickly, as it attempts to calm the class struggle breaking out around the country.

Workers in multiple cities have gone on strike and shut down profits at their stores to fight back against the company’s union busting. Workers have gone on strike in Buffalo and Ithaca in New York, Phoenix, Overland Park in Kansas, Denver, and Olympia and Marysville in Washington, as well as three stores in Seattle. So far, these strikes have been limited to one or two stores at a time, but some workers have begun to call for more coordinated strike action on a regional or national level.

“We have to stand in solidarity, not only as Starbucks workers, but as a united working class to show that we are willing to fight for what we deserve,” said Katie McCoy, a Starbucks worker and strike leader from Marysville, WA. “We need to escalate this fight to win what we deserve. We need coordinated nationwide walkouts to demand Starbucks stop union busting, to demand the reinstatement of the Memphis 7, Laila Dalton, and any other wrongfully terminated for organizing.”

It is no coincidence that the NLRB decision comes amid a wave of demonstrations and strike action by Starbucks workers, with many of those actions happening in and around Seattle. Seattle is home to both Starbucks headquarters and its billionaire CEO Schultz. Schultz lives in the district of Councilmember Kshama Sawant, whose office played a leading role in organizing the rally.

Sawant, who has won four elections in Seattle as an independent socialist and member of Socialist Alternative, has been clear that she represents Starbucks workers, not executives like Schultz. Sawant takes only the average wage of a worker, taking home $40,000 of her $147,000 city council salary and donating the rest to a Solidarity Fund, which goes towards funding strike funds and other worker struggles. Sawant has donated $26,000 from this Solidarity Fund to organizing funds launched by Starbucks Workers United and the Amazon Labor Union. She has called on union leaders and other socialist elected officials to do the same. In her speech at the rally, Sawant called for the labor movement to adopt a fighting strategy to unionize Amazon and Starbucks.

“If we are to build on what we know is dramatic and historic potential in the proud American working class, then we are going to need a clean break with the failed ideas of business unionism,” Sawant said. “What we need instead is a class struggle approach, the kind of militant, fighting ideas that our American labor movement was built on.”