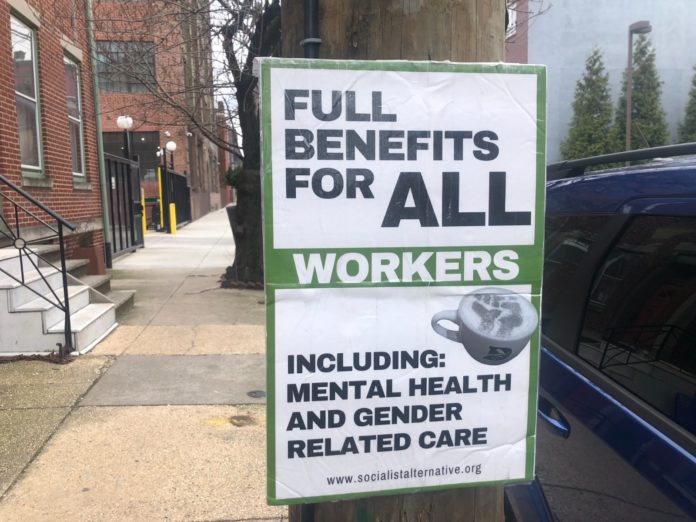 In the best of times, where right wing leaders like Texas governor Greg Abbott are not directly attacking access to gender affirming health care, it remains financially inaccessible to working class trans people. Most insurances will cover certain aspects of care such as hormone replacement therapy prescriptions or specific surgical procedures. Other procedures may rarely be covered by insurance plans and can be completely unaffordable out of pocket regardless of how important that specific type of care may be to the person in question. For example, facial feminization surgery for trans women can cost tens of thousands of dollars out of pocket. Most insurance plans view this as an “elective cosmetic procedure” despite the effects it can have on quality of life.

How do working and poor trans people access the care they need in these conditions? Many are trapped in low paid and generally unorganized fields of work that do not afford them this level of care. Workplace discrimination has often blocked large sections of trans people out of employment altogether. The solution to these problems has historically been to turn to sex work. In the age of GoFundMe another go-to has been crowdsourcing. The website even cynically has a page dedicated to fundraising for trans health care.

In the past few years there has been a slight change of tide with a trend of certain workplaces offering much more substantial health care options to trans workers, relatively speaking. Companies like IKEA, Starbucks, Apple, and Amazon have become sought out jobs for people seeking access to gender affirming care. In 2018 Starbucks was praised for rolling out “the most comprehensive trans health policy in the world.” Efforts like this both entice LGBTQ workers into devoted stints at low paid jobs and feed into a PR image of woke capitalism. The best part of all for them is that when the costs need to be scaled back it’s fully revocable. Starbucks workers have to maintain an average of 20 hours a week to qualify for health coverage. When the company attacked its workers’ hours recently in conjunction with its union busting campaign this also served as a direct attack on trans workers trying to qualify for benefits.

Organizing the Unorganized to Fight for More

Essential health care can not be entrusted in the hands of the bosses. That much is demonstrated through the attacks on Starbucks workers’ hours. When the ability to access necessities like these are gatekept behind the hours we’re given by management it is always at risk of being snatched away whether in retaliation or simply to directly save money on the cost of labor. For one reason or the other, it remains subject to the bottom line interests of capitalist shareholders. The only way to guarantee access to gender affirming care is to win it through an organized struggle led by the workers.

This kind of struggle is more possible than ever as previously unorganized jobs, particularly in service and retail, are seeing a wave of unionization efforts. After working through a pandemic, labor shortages, and inflation, companies like REI, Amazon, Apple, and more have become hot spots for workers looking to join together in the workplace and demand more. Leading this wave are largely Gen Z workers, often women and queer people.

At the forefront of this have been Starbucks workers who have filed for unions in over 150 locations across the country. In the battle for union recognition at these locations, and the contract negotiations that lay beyond, it’s important to raise what can be won through a union. For the LGBTQ workers well represented in the coffee industry, this places particular importance on high-quality gender affirming care available from day one on the job regardless of hours.

The power of the working class comes from its role in running society. The capitalist system fully relies on workers to generate profit through their labor for which they’re compensated very little. Workers create profit, but also have the ability to halt it and hit their bosses where they feel it the most: their bottom line. Our tools as workers,  work stoppages and strike action, can force the hand of the capitalist class to make important concessions. Striketober last year where over 100,000 workers across the country went on strike at companies like Nabisco, Kellogg’s, and John Deere pointed the way forward in terms of the kind of organized effort that working people need to use to better their conditions.

Workers in the heat of union drives and contract negotiations can leverage these tools outside of bargaining rooms to make gains within the bargaining room. This requires the buy-in of the widest possible layer of people in the workplace. Clear demands that draw LGBTQ workers into the fight are an important part of a broad program of workplace demands that speak to the interest of workers at large. Access to health care is a need that speaks to so many beyond queer workers, as do calls for higher wages and better hours. Combined together, these demands make it clear what is really at stake for those heading towards unionization and what can be won.

Extending Care Beyond The Bosses

The right to gender affirming care in the workplace is essential for unions to fight for, but it ultimately needs to transcend the workplace as well. All trans people regardless of our work situation should be able to expect high quality care without worrying about how it’s going to be paid for. The labor movement has a powerful role to play in winning Medicare For All which must include transgender care. In fact, completely separating health care from the bosses would free up unions to focus on other important issues such as higher wages or workplace safety.

If achieving this victory in an individual workplace means launching a focused struggle, then that only becomes more true when extended to society at large. Private insurance companies will never willingly part ways with the money making scheme they operate over everyone’s health and wellbeing. Coordinated action will need to take place across industries. Nurse’s unions have led heroic struggles throughout the pandemic and would have a key role to play in this fight alongside unionizing service workers and many others.
LGBTQ and women’s caucuses in these unions can play a really positive role in pushing this fight forward as a part of the fight against right wing attacks on both trans health care and abortion. Gender affirming care and care for pregnant people including the right to an abortion should be nonnegotiable aspects of a single payer health care system. Workers in these caucuses could raise proposals for rallies, days of action, and coordinated strike action to fight against these attacks and to put the question of health care firmly on the table. Workers at Disney planned walkouts to protest the “Don’t Say Gay” bill in Florida providing a very clear example of the kind of efforts that can be extended here. Efforts like that lay the template down for how labor can strike back against a system that places profit before human dignity.