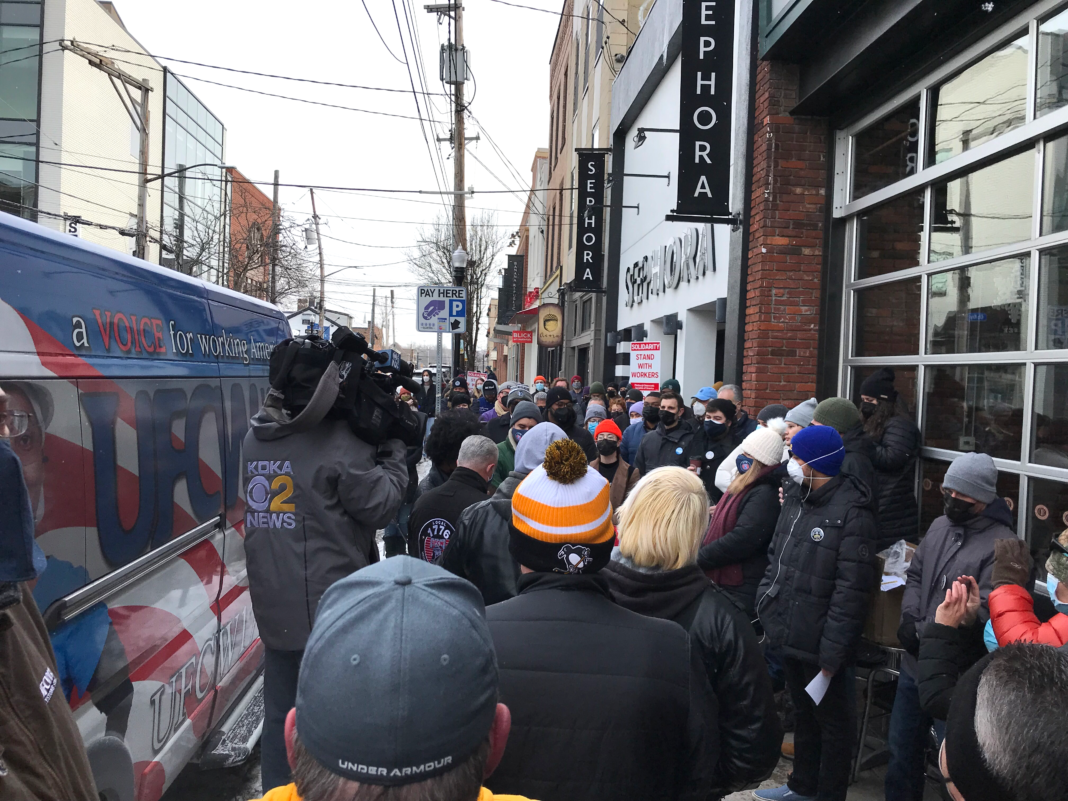 Co-author James Graham is a former worker at Coffee Tree and was involved in the successful union drive at the Carnegie Library of Pittsburgh in 2019.

A Coffee Union Win to Heat Up the Movement

More than 40 baristas at the local Pittsburgh coffee chain, Coffee Tree Roasters, won their union vote on February 22 after a months-long campaign. This is an important victory for all workers in Pittsburgh and will add more momentum to the coffee organizing wave sweeping the country.

Baristas at Coffee Tree have been among the many frontline service workers enduring hazardous conditions amid the pandemic. Such jobs have an incredibly high turnover rate of only a few weeks on average, no surprise given the rampant wage theft, loss of tips, abusive management, low hours, and inconsistent scheduling.

Rather than quit in hopes of less intense exploitation by a different employer like millions of workers are doing currently, Coffee Tree workers did what all workers need to do and got organized. They boldly launched a campaign to unionize baristas at all five of the company’s Pittsburgh stores, and filed for their election on December 22, 2022, hot on the heels of the first-ever successful union vote at two Starbucks stores in Buffalo, NY on December 9.

Coffee Tree Roasters’ owners immediately came out of the gate swinging with union-busting tactics meant to intimidate workers. These include mandatory captive audience meetings for the baristas where they are subjected to anti-union lies and intimidation.

The morning after Coffee Tree workers delivered a letter announcing their unionization effort to the CEO, the bosses retaliated by firing a barista for “tardiness,” despite no precedent and the barista’s clean record. This only spurred more organizing as the Coffee Tree Union rallied around this worker and called on the community to get involved and stand in solidarity. Coffee Tree Union asked customers to indicate their support by changing the name on their order to ‘Union Yes.’ The strongest showing of this community support was a well-attended rally outside of the company’s flagship Shadyside store. Despite the single-digit temperatures, at least 75 people came on a January morning to show their support, including dozens of students and young people, who are the ones most likely to support unions.

Dirty union-busting moves from the bosses are nothing new for the labor movement, or even for the current wave of Starbucks organizing nationally. Starbucks unjustly fired all seven workers on the organizing committee for the Memphis store in an attempt to decapitate that store’s organizing and frighten workers around the country. Socialist Alternative has been organizing alongside workers to reinstate the #Memphis7.

It will take a fighting movement of workers in coffee, workers in other industries, and young people to strike back against union-busting from the bosses. Solidarity days of action and walkouts are the type of militant tactics that we need to not only secure unions but to go on the offensive and win the real demands that coffee and service workers more broadly need like a $20 an hour wage, health care for all workers, and consistent hours. It’s incredibly positive that workers held a successful rally at the Bloomfield store in Pittsburgh on March 6 with over 100 people attending, undoubtedly inspired by the successful Coffee Tree rally. It’s these kinds of bold and escalating actions which are needed to build a strong campaign.

Getting the Goods: Winning a First Contract

For workers, the fight does not stop at winning a union. The bigger fight is for a strong first contract that locks in the demands that workers got organized for in the first place. The bosses will stop at nothing to protect their profits — this is true for smaller local chains like Coffee Tree Roasters, and it is even more true for a fast food mega-corporation like Starbucks. When negotiating a contract, it’s important to recognize that power in the bargaining room always comes from power outside the bargaining room and that we have to stay organized every step of the way.

A victory for workers anywhere is a victory for all, and the chain reaction of Starbucks and coffee shop unionization across the nation reveals the readiness of workers, especially young workers, to fight for more. These workers are done with suffering in silence or hanging onto any more hope that Biden and the Democrats will deliver the types of real policies that working people need, and have turned to the workplace as a key battleground to win what working people deserve.

Workers at Coffee Tree are pointing the way forward, and as the Starbucks organizing wave starts to take off more in Pittsburgh they will have an important role in continuing to be leaders in the movement and help Starbucks workers and others get organized. Baristas and coffee workers have an opportunity to organize not only as workplace units but as members of the wider working class, united against the bosses who get rich off of our labor.