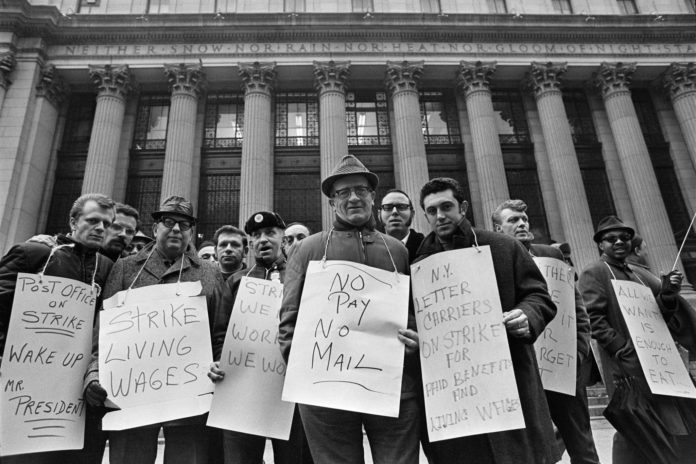 Prices keep going up, and working class people and the poor, with few savings to protect them, are being hit the hardest. Corporate commentators are beginning to argue that wage increases are the cause, yet it is prices that are rising first. Workers are being forced to fight back as we’ve seen with the recent uptick in contract disputes and strikes.

Lessons on how to fight back can be learned from the last big spike in inflation in the late 1960s and 1970s which caused real pain for workers and resulted in an explosion in strikes. One of the important results of these struggles was the introduction of Cost of Living Adjustments (COLAs) in labor contracts, which meant wages automatically increased when the cost of living increased. COLAs then spread into broader society.

There was also a growth in the size and breadth of the labor movement as new sectors of workers like teachers, other public sector workers, and nurses formed unions. The driving force behind this was an explosive growth of rank and file worker opposition to their union leaders, who were content with their privileged positions and refused to fight.

The first spike of inflation happened in the second half of the 1960s, with prices rising by over 5%. This was the result of the U.S. government printing dollars to pay for the Vietnam War and social programs at home. Without any protections, this resulted in absolute cuts in workers’ living standards.

Society was already being shaken by the civil rights movement and anti-Vietnam war movement, both among troops in Vietnam and in colleges. Working class youth drafted to fight in Vietnam not only revolted, but then came back home in an angry mood. Along with radicalized youth joining unionized workplaces, there was a determination to struggle against the brutal working conditions in U.S. factories, which had become hellholes as a result of corporate-driven workplace speed-ups.

This all caught the union leaders by surprise, who had totally failed to stand up to management on the shop floor. After World War II, labor leaders of the AFL-CIO union federation had made a pact with big business. In exchange for corporations accepting the right of unions to exist and to guarantee decent wages, they traded away the right to contest working conditions on the shop floor to factory owners.

Union leaders were quite public about their politics. George Meany, president of the AFL-CIO from 1955–79, speaking at the National Association of Manufacturers (NAM) convention in 1956, stated: “I never went on strike in my life, never ordered anyone else to run a strike, never had anything to do with a picket line . . . there is not a great difference between the things I stand for and the things that NAM leaders stand for.”

As part of this pact, union leaders promised to maintain a disciplined workplace free of strikes. This meant kicking communists and radicals out of unions, thus weakening the consciousness of how powerful fighting unions were built in the 1930s. They also agreed to not assert their power and influence directly in the political realm as an independent force, as had happened in most industrial countries by building workers or socialist parties. Instead, they trusted the thoroughly corporate Democratic and Republican parties to defend the interests of workers. Their failure to fight for free health care and further serious social reforms cut unions off from the wider working class.

This was business unionism in its purest form. It came into collision with angry workers who fought back against a brutal regime in the workplace as wages were being eroded by the swift rise in prices.

Postal Workers and Truckers Strikes of 1970

The 1970s was a decade of strikes. The year 1970 saw a massive 5,716 strikes, involving three million workers. Most of these strikes were initiated from below due to the anger of workers. The most dramatic expression of this was the postal workers’ strike. Incensed by Congress’s decision on March 12, 1970 to give itself a massive 41% pay raise, but only a 5.4% raise for postal workers, New York City letter carriers walked off the job, initiating the largest wildcat strike in U.S. history which lasted eight days.

Another dramatic strike was the trucker wildcat strike in April 1970. Angry at the poor pay raise negotiated by their Teamster union leadership, Teamster drivers in 16 cities in the Midwest went on wildcat strike.

The New York Times reported that in Cleveland “Strikers have set up a roving patrol system that they say can muster 300 men within an hour to stop any truck moving goods in the area. The strikers are allowing trucks carrying food, drugs, and beer to continue, but they have become outraged when they have found food trucks carrying other cargo.”

The government and big business threw everything at the strike to defeat it, including the courts and military. Acting Teamster President Fitzsimmons sent telegrams to 300 locals, urging members to return to work. But the strike held firm. After 12 weeks, employers in Chicago buckled, broke with the national agreement, and signed an agreement with a wage increase two-thirds higher than that agreed by Teamsters and management.

Both these strikes demonstrated a return to the traditions of the 1930s, as workers demonstrated their real power – to stop production and force the employers to settle. They demonstrated a new dynamism driven by young, militant workers as they looked for ways to fight and win.

Inflation fell in the early 1970s. However, after the ending of the global economic recession in 1973-75, inflation rose to new heights in the second half of the 1970s driven in part by war in the Middle East and the quadrupling of the price of oil. This set off a new wave of strikes affecting almost every sector of the economy from miners to teachers.

This strike wave should not be viewed separately from other social movements that crashed through the U.S. at this time. Most important was the radicalization of youth and wider society due to the civil rights, anti-Vietnam war, and women’s movements. Women and Black workers and young workers generally were on the frontlines not only in strikes, but in struggles by unorganized workers to win dignity and higher living standards in the workplace. The labor movement was energized and partially revitalized by this new generation of radicalized workers who refused to accept the timid response of union leaders.

Black workers played a key role having been radicalized through experience on the front lines in Vietnam, fighting in the civil rights movement, in the uprising following the assassination of Martin Luther King in 1968, and the formation of the Black Panther Party. Restricted to the most dangerous jobs in the auto and steel plants, they provided a backbone to the struggle of workers in these industries. The Dodge Revolutionary Union Movement (DRUM) formed in 1968 to organize the struggle of Black auto workers was an example of this militancy.

The 1970s was also the height of the women’s movement. This experience spurred women to organize in the workplace. Women workers were predominant in new organizing drives including teachers, other public sector employees, nurses, phone workers, and grocery store clerks.  Important gains were won through militant tactics, and at times, lengthy strikes. Many of these organizing drives have important lessons for workers looking to organize today.

Confronted by the failure of the existing union leadership to lead struggles, workers moved to replace them with a more fighting leadership. This began with the victory of Miners for Democracy (MFD) candidate Arnold Miller defeating the corrupt miners national president W. A. Boyle in 1972. In the Steelworkers union, reformer and fighter Edward Sadlowski just missed being elected to the Steelworkers union presidency in 1977 with 43% of the vote.

In the Teamsters, UPSurge was formed in 1976 to fight for a decent contract for Teamster members. At its founding convention, delegates from the shop floor voted in favor of ten contract demands covering part-timers, appearance standards, supervisors working, unsafe equipment, sick days, holidays, and radios. UPSurge merged with Teamster for Democratic Union (TDU) in 1980. A decade of campaigning work resulted in the voting out of the entrenched bureaucracy, with election as national president of reformer Ron Carey and a majority TDU-backed executive board in 1991.

There are important lessons for workers and activists from the events of the 1970s. This article can only touch the surface of these events. By building fighting unions, workers were able to defend their living standards with widespread introduction of COLAs.  A central part of their successes was the influential work of socialists and other radical activists who were at the center of many of these struggles. The absence of a sizeable fighting socialist organization that could pull together the best fighters and provide a way forward based on class struggle methods and preserve these lessons meant that many of these lessons were lost.

There are many parallels for the movement today. We are also coming out of a surge of social movements, and the radicalizing effect of the Bernie campaigns. Already, we see the Great Resignation, increased support for labor unions and an uptick in strikes, including rejection by rank and file workers of poor contracts negotiated by union leaders.

Today, as in the 70s, it will take radical action by rank and file workers and the development of a fighting, and socialist leadership to win real gains.