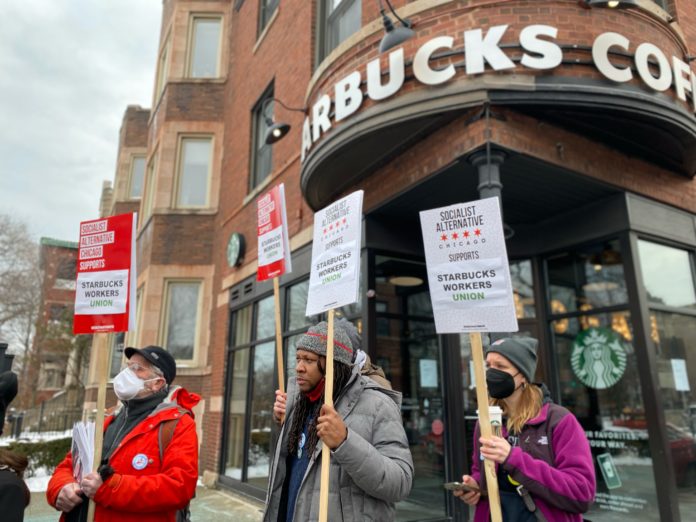 Below is the text of Kshama Sawant’s speech at Alderman Byron Sigcho Lopez’s press conference announcing his introduction of a resolution to the Chicago City Council in solidarity with Starbucks workers fighting for a union. Also in attendance was City Councilmember Robin Wonsley Worlobah introducing a similar resolution to the Minneapolis City Council.

I’m excited and honored to speak today alongside my fellow socialist elected representatives and fellow DSA members, Byron Sigcho Lopez and Robin Wonsley-Worlobah, in supporting Starbucks workers’ historic fight for a union, and especially alongside Chicago Starbucks workers Fernando Vargas-Soto and Sydney Durkin at the Seattle Broadway and Denny store.

Thank you so much for having me here, as Byron said this is a battle from coast to coast.

We have seen how the crisis of the past two years has led to the beginnings of a labor uprising. We saw powerful strikes last year, from the heroic struggle of the John Deere workers to the rank-and-file led strike of carpenters in my hometown of Seattle.

And now we are seeing an inspiring movement of service workers beginning. Congratulations to the Buffalo Starbucks workers who succeeded in unionizing two stores, despite intimidation by the bosses.

Sydney talked about the type of harassment and intimidation workers are facing. And yet, despite everything stacked against them, workers now more than 50 stores around the country are announcing their decision to unionize. As Sydney said, 16 stores declared just yesterday alone! This is incredible momentum but we have to keep pushing, we cannot get complacent.

And now it is my honor today, to stand alongside Chicago Alderman Byron Sigcho Lopez who is announcing his own resolution and now Minneapolis City Councilor Robin Wonsley Worlobah who has announced that she will also be bringing a resolution.

Starbucks workers have already demonstrated the value of having a union and a fighting approach around concrete demands. Soon after winning their union, the Buffalo workers went on a five-day strike and forced the company to give workers paid time for quarantine and self-isolation if they are exposed to COVID. They won this company wide! This is a colossal victory. It will benefit every worker in all 9,000 Starbucks stores in the country. This shows the huge potential power of the working class when we get organized and withhold our labor.

We hear a lot of empty rhetoric in Seattle, as I’m sure you all do in Chicago. By voting yes on this resolution, Chicago Aldermen would take a stand with Starbucks workers rather than just saying “woke” things when they don’t matter – as happens a lot in Seattle. By voting yes, they would call on Starbucks corporation to accept card check neutrality, which is recognizing a union when the majority of a workforce signs union cards, and committing to allow employees to discuss unionization free from threats, intimidation, anti-union propaganda, anti-union meetings, and lawsuits.

And I don’t want to hear from politicians that this is a “symbolic” resolution. There’s nothing symbolic about it. There’s nothing symbolic about elected representatives standing with an active unionizing struggle. This resolution is very simple, too. If a politician claims to be pro-worker and pro-union, then you should vote YES on it and not attempt to water it down. It’s time for them to show which side they’re on – the workers or the bosses.

I agree with Robin, we should be doing everything in our power to support the workers. As some might know, I take only the average workers’ wage and the rest after taxes goes into a solidarity fund for struggles like this one. Just yesterday I donated ten thousand dollars to the Starbucks workers union struggle.

Let’s take a moment this morning to understand what is at stake here. Starbucks is a behemoth of a corporation, with $29 billion in revenue last year. If Starbucks workers succeed in building a union – and not only building a union, but winning a fair contract – this will be nothing short of an earthquake. It will be unprecedented in the massive fast food industry and the first successful union drive on this giant scale in the private sector in decades.

Let’s also understand what it will take to win – workers must rapidly organize as many Starbucks stores as possible, and prepare for hard contract battles. We know workers understand this, we will need a class struggle approach to win – there can be no illusions that the bosses will be on our side – they will fight ferociously against us.

The bosses will tell workers they don’t need a union, that they’re a partner in this company, that unions just want your dues money and don’t do anything. But what does it mean to say workers are “partners” when the CEO makes $20 million dollars while workers are struggling to pay rent? And if unions allegedly don’t do anything, then why is Starbucks terrified of them?

As both history shows and the Starbucks workers are showing, and as my fellow Socialist Alternative and DSA member Ryan Watson said, power at the bargaining table comes from power outside.

That’s why we are proposing to Starbucks workers that it would be a good idea to do a National Day of Action to help spread the unionizing struggle to hundreds of stores. For workers to coordinate in a nationwide campaign with powerful demands and in unity against the billionaire Starbucks bosses.

The history of the class struggle speaks also to the crucial importance of fighting demands, and beginning discussions on demands early including coordinating regionally and nationally is going to be crucial to push back against anti union propaganda. Bosses will say unions sound good in the abstract but in practice don’t work, and that’s why we have to describe in concrete terms what a union could bring if we actually fight for it. As we say in the labor movement, the best defense is a good offense.

The best way to defend against Starbucks’ union-busting is by clearly explaining both why a union is needed and what exactly it will fight for and that is why I wanted to echo the things Fernando and Sydney already talked about. Having a living wage before tips, having fully covered healthcare for all workers not just full time workers. All of these are real things workers need and will be willing to fight for. I’m excited to see where this struggle goes and to make sure we win a union at Starbucks and that we fight for and win fair contracts for all coffee shop workers.

Thank you and solidarity!