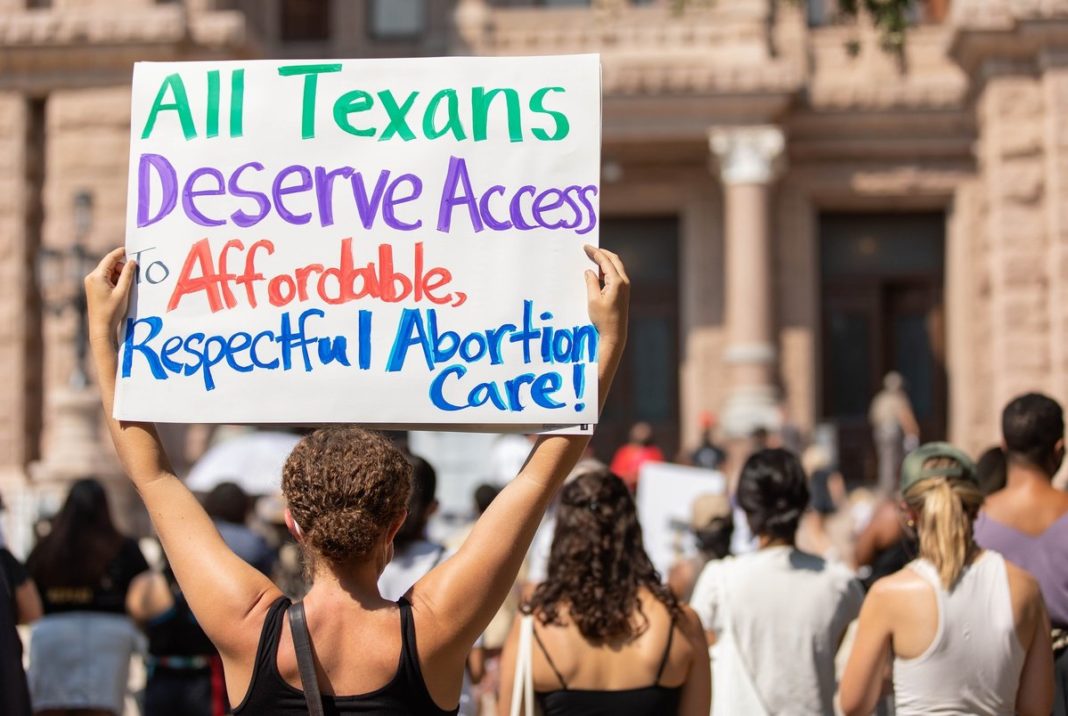 In 1973, Roe v. Wade, which was originally filed in the state of Texas, ruled the U.S. Constitution guaranteed the right to an abortion, and that this right could not be subject to excessive government interference. This was the result of a titanic women’s movement, with radical politics that spent years organizing from the ground up to win reproductive rights. That was 48 years ago and the right wing counter-movement has been fighting to have it overturned ever since. And because of their fight we’re right back to where the state was before 1973 with the passage of Texas Senate Bill 8 this year.

The U.S. Supreme Court barely commented on the bill and refused to block it from going into effect on the first of September. This paints a worrying picture for another major threat on the horizon: the Dobbs v Jackson Women’s Health Organization case which would overturn Roe, and will be heard by the Court starting on December 1.

The barbaric and unprecedented Texas law bans abortion as early as 5 to 6 weeks into a pregnancy, on the basis of when a fetal “heartbeat” can be detected. This covers 85-90 percent of abortions. There are no exceptions for cases of rape or incest. The ban will slip through the courts on the basis of its unique method of civil enforcement: rather than the government, the bill allows anti-abortion ‘vigilantes’ to sue a patient, a doctor and/or clinic, or anyone who aids and abets an abortion procedure for a bounty of up to $10,000. It is now official that any person who wants or needs an abortion cannot get one in the state of Texas. On top of all this, the reproductive services that were provided by clinics like mammograms, Pap smears, cancer screenings, testing for STDs, and so on are no longer being provided for free or at cost for working and poor people due to closures of these clinics because of the fear of the escalating numbers of lawsuits..

The State of the Movement

Now the first month of the ban is almost over and not much else has happened. Between the Democrats and reproductive rights nonprofits like Planned Parenthood, NOW, and NARAL, who issued public statements but no calls to action, millions of angry young women have been left wondering why more isn’t happening.

Senate Bill 8 places any doctor who performs an abortion in the path of potentially crippling civil lawsuits. And, in a stand against this barbaric law, one Texas doctor, Dr. Alan Braid of San Antonio, has put himself in the crosshairs of a suit in order to challenge the law. He provided a medically necessary abortion after the ban went into effect and wrote an op-ed to declare what he had done and why. At this point, two lawsuits have been filed against him. This open defiance of the law is what we need – and even more importantly, we need to rally the public in solidarity with providers and patients who defy the ban, as part of a resistant movement to wholesale overturn the savage ban.

Already clinics in nearby Oklahoma and Kansas are reporting a surge in people seeking abortion services. There are groups that provide abortion funds to assist any person who can afford to take time off from work and/or find someone to take care of their children while they travel hundreds of miles to the “closest” clinic to get what should be a private and simple medical procedure. Since they now have to go out state, they also have to check and make sure they are complying with another state’s abortion laws. Meanwhile, Florida has introduced a bill of their own modeled after Texas, and other states are sure to follow. This barrage of attacks will continue until Roe v. Wade is either overturned wholesale, or made law once and for all.

Democrats in the U.S. House of Representatives passed a law that would codify Roe v. Wade and establish abortion rights at the federal level. But without abolishing the filibuster, the bill will not make it through the Senate and it will amount to little more than a performance. Biden’s Justice Department has filed a lawsuit to challenge the ban, but it is based on shaky legal arguments and will take time to wind its way through the courts — time that working class people and families cannot afford to waste.

The Texas ban is being imposed at a time when reproductive rights are being won and expanded in other countries. From Ireland to Argentina and most recently in Mexico, womens movements are either winning or expanding abortion rights. These movements have taken up the tactics of protests, student walkouts, strikes, and other militant actions to fight against the far right. At the same time, countries like Poland and China have issued restrictions on abortion rights, and it is critical that we organize an international working-class movement, acting in solidarity and sharing lessons, that fights for abortion rights worldwide.

In the U.S. the effort to defend abortion exclusively through legalistic means has not been enough to prevent the gradual reduction in abortion rights and access, and now finally the almost total elimination of reproductive choice in Texas. We need to revive the traditions that won Roe in the first place by getting organized in our schools, workplaces, and communities, carrying out bold tactics of escalation, and relying on working class solidarity, not the Democrats, to win guaranteed free access to abortion for all.

With the Dobbs case looming on the horizon, it is crucial that the October 2 days of action nationwide are continued. The next several months will be a critical time for organizing, building power in our workplaces, schools, and communities to fight the attacks and win.

Our struggle for women’s liberation needs to go beyond the question of access to free, safe, and legal abortion. This ban and others like it will impact poor and working-class people the most, imposing desperation on top of an already desperate housing crisis and childcare crisis. We need a mass struggle for free, excellent reproductive care including universal childcare, rent control and high quality, publicly owned housing. We need an end to health care profiteering and an immediate transition to Medicare for All. A socialist struggle has to take up the struggle against racism, transphobia, and terror against immigrants as all forms of oppression serve only to divide the working class from one another.

Defend Kshama Sawant and the Right to Protest — Reject the Recall

DSA Should Build a Movement to Defend Abortion Rights