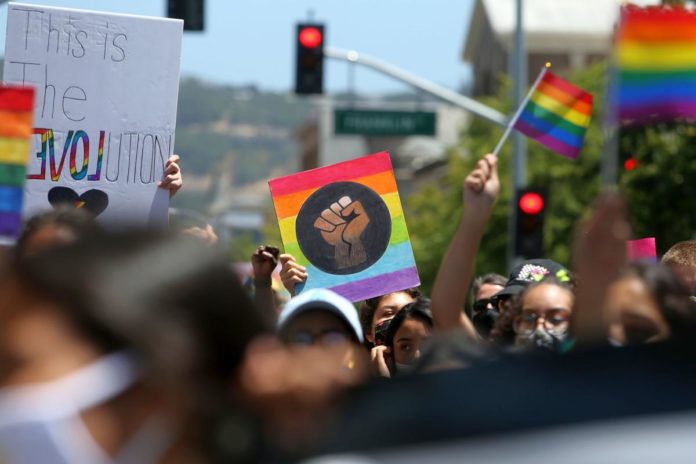 As we honor Pride month this year, transgender people across the country are under attack by a record-breaking wave of anti-trans bills in state legislatures, primarily targeting trans youth. The number of bills overshadows the amount of discriminatory legislation brought forward even at the height of the 2016 “bathroom bill” wave.

The assault on our rights includes bans on participation in school sports, bans on access to gender-affirming health care for minors, and restrictions on school curriculums. Tennessee stands out particularly as it works its way through what has been dubbed the “Slate of Hate.” The most recent bill signed into law there is a requirement that businesses post notices publicly warning customers if the business allows trans people to use the appropriate bathroom.

Legislative attacks on the rights of trans, intersex, and gender-nonconforming people is horrific, but only represents one side of what the LGBTQ community is up against. Last year was the single most violent year tracked for trans hate crimes, with forty-four people murdered as a result of transphobic attacks, overwhelmingly trans women of color. Trans people, and LGBTQ people more broadly, are at higher risk of poverty, homelessness, and suicide.

Many looked to last year’s elections as a light at the end of the tunnel and a way out from under the challenges of being queer under Donald Trump’s presidency. The Trump administration banned trans people from military service, reversed workplace nondiscrimination provisions, and removed explicit protections for LGBTQ people in health care.

Biden’s campaign promised a stop to the most reactionary policies of the previous administration. On his first day in office, he issued an executive order that federal laws prohibiting sex-based discrimination should include sexual orientation and gender identity. He subsequently overturned the military ban, and ordered refugee programs to accommodate those seeking refuge for their LGBTQ status.

Any reform that eliminates unequal treatment for queer people is positive, but it should also be noted that Biden has only tackled the most low-hanging fruit of reactionary policy. LGBTQ lives and well-being require much more fundamental changes. Protection against discrimination in health care is needed, but what does it mean if you are unable to afford a doctor’s appointment to begin with? We need Medicare for All, more union jobs that protect against workplace discrimination, and high-quality, permanently affordable housing, all of which will require more substantial pressure from below.

The most long-term damage to LGBTQ legal rights coming out of the Trump era lies within the Supreme Court’s reactionary majority, which will not be reversed by any executive order. The appointments of far-right justices Neil Gorsuch and Brett Kavanaugh loom heavily over the current wave of anti-trans bills, as do courts across the country with right-wing Trump appointees. Absent a mass movement for the advancement of LGBTQ rights, the courts cannot be relied on to overturn right-wing legislation.

The Radical Roots of Pride

The spark for the modern LGBTQ movement came fifty-two years ago with the Stonewall rebellion. A police raid at the Stonewall Inn, a New York gay bar, caused mass frustration to boil over. In reaction to discrimination and repression, a five-day riot broke out that captured the imagination of the gay community internationally.

The early years of the movement were a time of radical organizing for the advancement of gay rights. The Gay Liberation Front and related organizations were formed directly out of the rebellion. The initial battle against prejudice and oppression was fought with calls for economic justice and a clear connection to anticapitalist struggles. These are the lessons that need to be brought back into our movement today.

We now commemorate the Stonewall rebellion each June with Pride month. Unfortunately, in recent years its radical foundations have been obscured by corporate co-optation. Pride marches devolved into Pride parades where bank and big-business floats reigned while LGBTQ workers could only watch from the sidelines. However, activists have fought to reclaim the radical roots of Pride. This is exemplified by New York City’s third annual Queer Liberation March this year, which excludes corporate and police presence.

Last year’s corporate Pride parade in New York was canceled due to the pandemic, but the protest march went forward in solidarity with the BLM movement as “The Queer Liberation March for Black Lives and Against Police Brutality,” which drew in tens of thousands of people. Pressure from this momentum has even led the organizers of corporate Pride to ban police from their future parades. This type of mobilization is extremely positive.

An as of yet unfulfilled promise on Biden’s part is the passage of the Equality Act. This would enshrine into law protections against discrimination on the basis of gender identity and sexual orientation. It passed the House in February, but its future in the Senate looks bleak as the Democrats refuse to get rid of the archaic filibuster that allows a Republican minority to block any legislation that has less than sixty votes in favor. Passing pro-LGBTQ and any broadly pro-worker legislation will require real pressure being brought to bear. This month’s Pride demonstrations should be used to organize around concrete demands. Some of these demands should include passing the Equality Act, passing the Protecting the Right to Organize (PRO) Act, and immediately introducing Medicare for All.

No Pride for Some Without Liberation for All

The fight against transphobia and homophobia will never be successful if fought in isolation from other forms of oppression. As Stonewall veteran Marsha P. Johnson once said, “You never completely have your rights, one person, until you all have your rights.” The drive for profit at the heart of the capitalist system relies on a divide-and-conquer strategy against working and oppressed people.

In order to heal the divisions that continue to plague the working class, the labor movement should boldly take up the demands of queer people as an important part of a broader program for workers’ rights. Trans workers and workers of color are more likely to find themselves working low-wage, generally unorganized retail and service jobs. Unions can play an outsize role in forging unity and solidarity among working people by taking up bold campaigns to organize the unorganized. Doing this successfully, and winning the buy-in of all, will mean taking up demands against oppression more broadly.

A true end to queer oppression cannot be achieved through a system that requires inequality to maintain itself. The struggle against queer oppression needs to be linked up to other struggles of the working class and oppressed, and channeled toward fighting for a socialist restructuring of society. An end to capitalism will not immediately erase centuries of transphobia and homophobia, but would strike quickly against the most notable inequalities and lay the basis for a society that could fully eradicate gender- and sexuality-based discrimination.