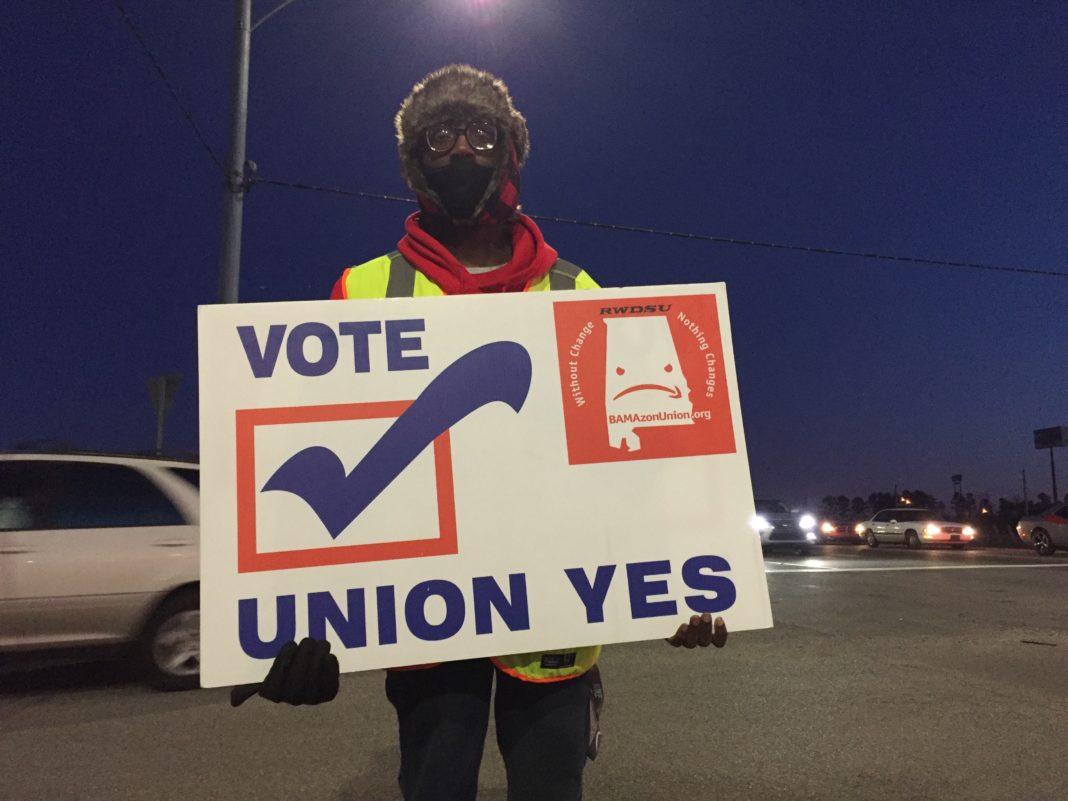 Click here for a model resolution to introduce in your union!

As union members and socialists we want to express our ardent support and solidarity with the Amazon warehouse workers of Bessemer, Alabama who are fighting to establish their union. The entire labor movement has a duty and responsibility to do everything we can to promote this historic campaign.

A victory in Bessemer would deliver a serious blow to the racist, anti-union establishment that dominates the South and would have an impact far beyond Alabama. Their success would boost the confidence of workers everywhere, and help to reverse the decades-long decline in union membership.

As frontline essential workers in education, healthcare and transit, we understand and support the impulse of Amazon workers to assert some control in their workplace by forming a union. Unions are workers’ sharpest weapon in the struggle for safety, wages and rights on the job. The backbreaking pace of work, constant monitoring and surveillance, low wages and unsafe conditions at Amazon have generated both the conditions compelling workers to organize and the billions in profits for CEO Jeff Bezos, one of the richest men in the country. He has invested millions in union busting lawyers to crush this union organizing drive at the source and prevent it from spreading through the corporation.

The Retail, Wholesale and Department Store Union (RWDSU) began organizing efforts at the Bessemer warehouse after last summer’s massive Black Lives Matter protests and sees this campaign as a struggle for civil rights on the job. Bessemer and Birmingham are majority-Black cities, and at this warehouse 85% of the workforce is Black and a majority are women. Fighting racial and gender oppression is a crucial component of the class struggle and of the organized labor movement. Unions must actively support Black Lives Matter and take up the fight against racism. This is how we can build a multiracial working class movement strong enough to take on Amazon and big business for the benefit of all workers.

We are committed to using our elected positions in our unions to help support the struggle of the Amazon workers in Alabama, and we call on all of our union sisters, brothers, and siblings  – both leadership and rank-and-file – to do the same. An important example has been set already by local poultry plant workers who are actively helping flyer the warehouse and knock on doors in Bessemer in support of the workers and their union.

We’re launching this petition for union members around the country to circulate and help organize solidarity efforts nationally. We should pass resolutions in support of the “BAMAzon” workers, host solidarity rallies, participate in days of action, and where possible, send people to help the campaign or phonebank during the final weeks of voting. All workers, unionized or not, should be talking with their co-workers about this campaign and its enormous significance.

The labor movement must go ALL OUT to organize Amazon workers across the country and the world as part of a broader offensive, especially focusing on frontline and essential workers who have borne the brunt of the pandemic and accompanying recession. This should be linked to the fight to tax Amazon and the rest of the billionaire class to fund schools, housing, and Medicare for all.

Click here for a model resolution to use in your union!