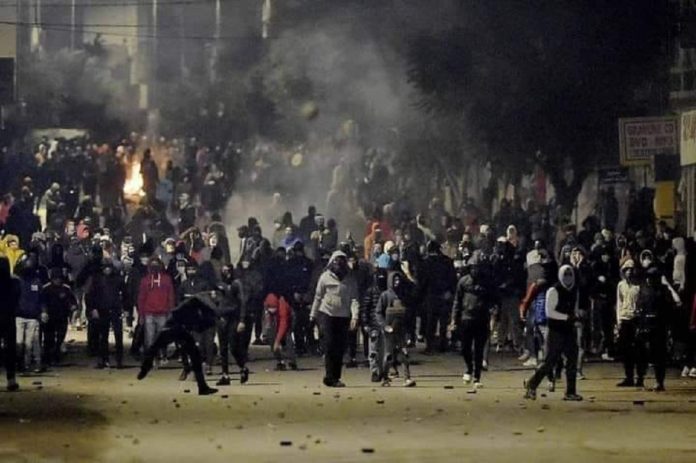 Ten years since the Tunisian revolution broke out, the Tunisian people have once again declared their rebellion against the reality of poverty, injustice and marginalization that they still live under.

Despite the revolution having succeeded in uprooting the symbols of the dictatorial regime of that time, all the successive post-revolution governments have carried on with the same policies that were pursued during the pre-revolutionary period. They have had absolutely no solutions whatsoever to offer to the country’s economic and social crisis; in fact, they have contributed to deepen this crisis every step of the way.

This makes clear that the Tunisian revolution has not completed its road, since the goals for which it broke out have not been achieved. Even freedom of expression has become increasingly threatened, as illustrated most especially through the recent events: restriction of basic freedoms, daily harassment of activists, arrest of hundreds of protesters, and systematic police repression of social movements. All these moves are aimed at facilitating the continuation of the same policies of impoverishment for the majority and ever-lasting enrichment of a corrupt ruling class.

All governments after the December 17 2010-January 14, 2011 Revolution have acted as a roadblock to completing the revolution. This is because they have been all based on the capitalist system, that is responsible for perpetuating the exploitation of workers and poor people as well as the financial, administrative and bureaucratic corruption at the high levels of the state.

The current revolt, driven by the youth in all popular neighborhoods, requires an urgent appeal to all living revolutionary forces to join together, unite and organize around a specific program to frame this revolutionary movement in every part of the country, and avoid it falling into chaotic, nihilistic and dispersed actions.

We are a revolutionary socialist group who believe in the right of the Tunisian people to carry on with its just revolutionary struggle, until it can democratically control, plan and enjoy the country’s wealth. In light of the deteriorating situation in the country, we propose the following demands: