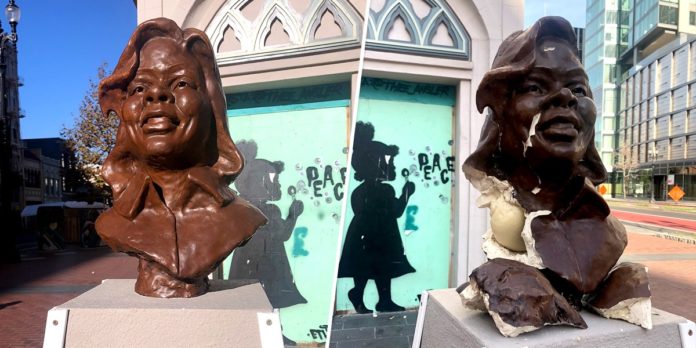 On December 12, I installed a memorial to Breonna Taylor in downtown Oakland. Two weeks later it was vandalized. The 400 pound statue was tipped over, shattering the ceramic likeness of Breonna Taylor. This racist attempted intimidation against the Black Lives Matter movement was met with outrage and solidarity, not only from Oakland, but also the nation and the world. In three days over 600 people donated to the fund to rebuild the memorial.

In less than 24 hours enough money was raised to rebuild the sculpture and cast her in bronze. The vast majority of donations are $25 or less. This incredible show of solidarity is a rejection of the intimidation and division the vandals were trying to sew.

It is not surprising that racist forces saw this sculpture as a target and carried out their attack. Just as the statues of confederate generals are being torn down one by one, it is no surprise racists want to strike back against our symbols of racial justice.

Two days ago the statue was attacked a second time. This time it was stolen and most likely completely destroyed. Having realized their first attack was unequivocally repudiated by the huge wave of support we received, the vandals returned in a further attempt to attack us and the Black Lives Matter movement by stealing the statue altogether.

Our response was to host a press conference and rally the same day to denounce their attack and concretize her memorial, both literally and symbolically. We filled the pedestal with 3,000 pounds of concrete, and placed flowers atop it in Breonna’s honor. They tried to erase the symbol of her death at the hands of racist police, and we will fight to maintain it. Now the memorial will have to be entirely reconstructed. Please help out by donating to the Gofundme.

This Attack Was an Outgrowth of the Broader Struggle

A few angry vandals aren’t the beginning or the end of the problem. They are an expression of the political moment: Trump has been kicked out of office, but Trumpism remains. White nationalists and the broader far right have been emboldened through his presidency. We’ve seen this through vigilante violence against the Black Lives Matter movement as well as the violence in Charlottesville in 2017.

Alongside this, we’ve seen an overwhelming shift to the left among working people over many years. The evidence for this is clear, not the least of which is the millions of people in thousands of cities across the world that participated in the Justice for George Floyd uprising last summer. For many it was their first political action ever. On top of this, economic issues in November’s election, from a $15/hr minimum wage to Medicare for All polled well even among Republican voters.

At our December 29th press conference, Mike Hutchinson, newly elected school board member spoke of Oakland’s Black roots and displacement of its Black working class. He asked, “Why are all of Oakland’s politicians not here?”

Newly elected city councillor and left Democrat Carroll Fife has offered her support for the campaign to keep the Breonna Taylor Statue. Carroll Fife’s campaign highlighted the bloated Oakland Police Department budget and the housing crisis facing the people of Oakland. Oakland desperately needs to defund its increasingly militarized police by at least 50%, tax the rich, and fund our public schools, and Medicare for All. Also, as the memory of the Ghost Ship Fire is still so vivid for many Oakland artists, we need an immediate program to build high quality affordable housing.

Art can support and strengthen mass movements like Black Lives Matter, which can shake the halls of power. I’m an Oakland resident and before the pandemic I was a server at a burger restaurant in Berkeley. Since then I’ve been unemployed. Over the summer I participated in more marches and demonstrations than I can remember. This art wasn’t made with grant money, city funding, or a wealthy patron. It was made with pieces of my unemployment checks and my own labor. Now the bronze reconstruction will be built with the support of the community.

We’re calling on Oakland Mayor Libby Schaaf to formally recognize the location of the memorial. She was prepared to give a gesture of support when she tweeted a link to the go-fund-me, but we need far more than symbolic gestures. We need the city to break it’s ties to the big developers that run the city. We need covid relief, high quality affordable housing, and an end to racist police violence.

We will not let Breonna Taylor and all the people that have fallen under the blows of police brutality be forgotten. We will not be intimidated by the far right. We will win this war and establish a society free of racism and poverty.