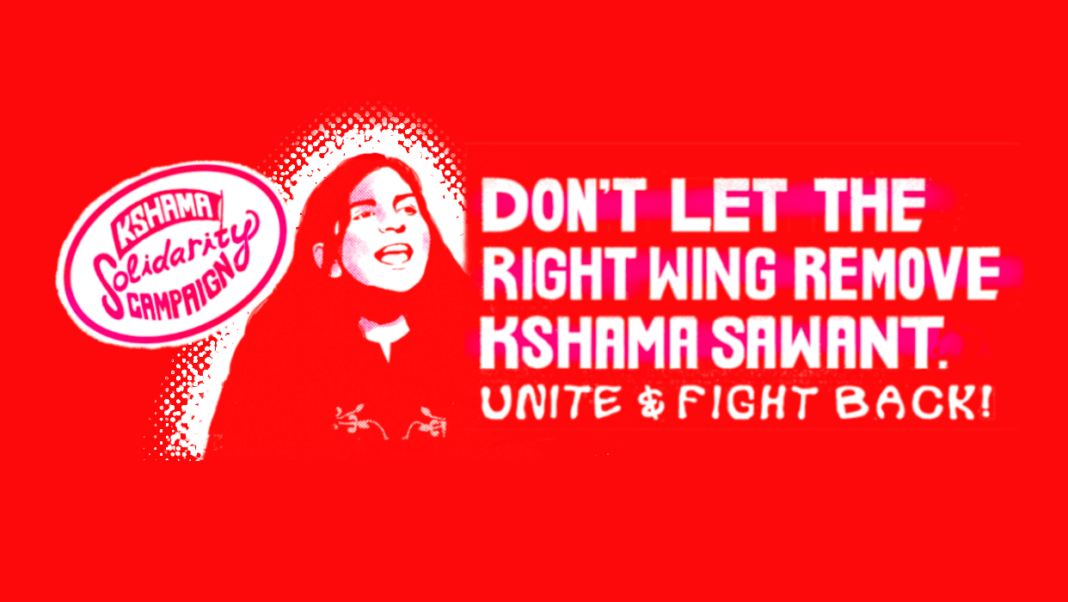 The following letter was written from Councilmember Kshama Sawant to Seattle Democratic Socialists of America (DSA) members about the attempt by big business and the right wing to remove her through a recall campaign. It was sent on November 27 to the Seattle DSA co-chairs with a request for them to forward to their membership.

Thank you for endorsing the Kshama Solidarity Campaign, for the work you do to build the socialist movement, and for all your solidarity and collective work with my office and Socialist Alternative, including most recently the historic fights to Tax Amazon and defund SPD.

I am writing to you about the recall campaign that has been launched against my office by Seattle’s ruling class in an effort to remove socialist politics (they hope) once and for all from the City Council. You may have seen my op ed recently published in Jacobin about this attack.

I understand that you will be voting on a resolution about our Kshama Solidarity Campaign at your next general membership meeting, on December 1, along with other resolutions on your priorities for next year.

Thank you for prioritizing the Solidarity Campaign with this resolution. I wanted to send some thoughts and questions for your consideration in the leadup to the vote.

I think it is important to recognize what is at stake in this fight, which I believe is part of a broader attack on socialists and the left. If the recall is successful I think it will be used as a springboard for further attacks in Seattle and nationally.

As you know, while it is enormously important that Trump was defeated, the attacks on the left that were escalated under him will in no way end as he leaves office. The left has of course been increasingly the target of the Democratic leadership, which is seeking both to push back on social movements and to lay the blame on socialist politics for the lack of a “blue wave” in the national elections.

This is nothing new, but it is a portent of things to come as our movements contend with pro-capitalist Democrats again in the White House. The Democrats will preside over a historic crisis of their system and ferociously push back against all our demands: for Medicare for All, a Green New Deal, and every other aspect of the platform that socialist candidates and elected representatives have fought for and helped make enormously popular. There is of course also an ongoing attack against Black Lives Matter, with Biden and other corporate Democrats completely rejecting defunding of the police and trying to erase it from the agenda.

I believe it is no accident that two of the four charges in this recall campaign are about my support for Black Lives Matter and the fight to defund SPD (including of course the protest that Seattle DSA co-organized with families of the victims of police violence in Mayor Durkan’s neighborhood). Our comrades have reported that the Recall Campaign in its public activity is leading with language about how I have “promoted lawlessness” through my support for BLM – an obvious racist attack on the movement.

As you are well aware, here in Seattle all the Democrats on the City Council capitulated on their promises to defund the police by 50%, and it was only under the pressure of our People’s Budget and Solidarity Budget movements that the Council Democrats were forced to support significant cuts to the SPD budget. At the same time, they attempted to represent an austerity budget with nearly $200 million in cuts to vital services as an “anti-austerity” budget, while refusing to raise the Amazon Tax a small amount to eliminate those cuts. Further, we’ve heard that Democrats are working with big business to try to eliminate the Amazon Tax with a new “preemption clause” in the State Legislature that would ban local governments from taxing corporations statewide in early 2021.

In Seattle and nationally, the devastating impacts from the pandemic and recession are growing steadily worse, and in this context the Democrats are trying to make working people pay for the crisis instead of big business. We desperately need more socialist and independent voices for our movements in public office, not fewer.

The capitalist class fears the example that socialists and social movements are setting in Seattle — especially at this time of crisis, with tens of millions protesting and a new generation looking again to socialist ideas. They’re angry about the Amazon Tax, the defunding of the police (even the limited cuts ultimately made to SPD), the $15 minimum wage, and every other victory of Seattle’s movements.

For this reason, we should expect them to go all out in this fight – even more ferociously than they did last year when Amazon and the Chamber spent well over $4 million trying to buy City Hall. This recall campaign is an attempt at a do-over of that election, and they are completely determined to not be defeated again.

This is an extremely serious threat. And unfortunately, all that is necessary for us to lose is for socialists and working people to underestimate the danger represented by this attack and fail to prioritize the fight to defeat it.

This is why I am both writing to thank you for your support and to ask that you make the Solidarity Campaign a top priority for your organization next year. Because we will absolutely need Seattle DSA’s full support in this fight, and in fact a wider mobilization of the socialist movement nationally.

I know you have your own democratic process, as we do in Socialist Alternative, and have other priorities to discuss, and that is as it should be.

What I am specifically requesting is for you to consider making your canvassing for this Solidarity Campaign a top priority for the first half of this coming year – according to the manner and timeline available to us during this pandemic.

We were able to defeat Amazon and big business’s efforts last year because we built a powerful grassroots campaign, with a bold socialist platform, that we brought to over 220,000 doors. DSA’s support in this canvassing, as well as in the Tax Amazon fight earlier this year, was indispensable.

I believe that with the full might of big business about to be thrown at us, in the context of this pandemic and all the challenges it poses, we will need your help more than ever.

While the date of the recall election is not yet fixed, we believe it is likely to be held in May, June or July. The recall campaign will have six months to gather its 10,700 signatures after the Supreme Court ruling on January 7, and the election will be organized between 45 and 90 days after those signatures are certified. We will not be in any way waiting until the date is determined, and are currently phonebanking in the context of the COVID-19 spike, but will resume in-person activity once it becomes safe to do so.

I hope this can inform your plans and discussion.

I understand that Sherae Lascelles was asked to give monthly updates about their election campaign in your Seattle DSA general membership meetings. I think that made sense in order for your democratic organization to fully engage with the challenges of an important campaign for the left. If possible, I would like to do this also. In particular, I would like to be able to speak on December 1 about the Solidarity Campaign and to answer any questions that your members have. If my not being a member of DSA at present is an obstacle to this, I would be happy to discuss taking that step, while also remaining a member of Socialist Alternative.

Lastly, I wanted to let your membership know that the Kshama Solidarity Campaign and Socialist Alternative are forming an Advisory Committee for our campaign, which will meet monthly beginning in mid January. We would like to ask DSA to choose two representatives to participate in that body, where proposals can be brought and strategy discussed for how we can defeat this right-wing attack on the socialist movement.

Thank you for your consideration.

“Nothing Short of an Earthquake”: Starbucks Workers United Fight for Fair Union Elections