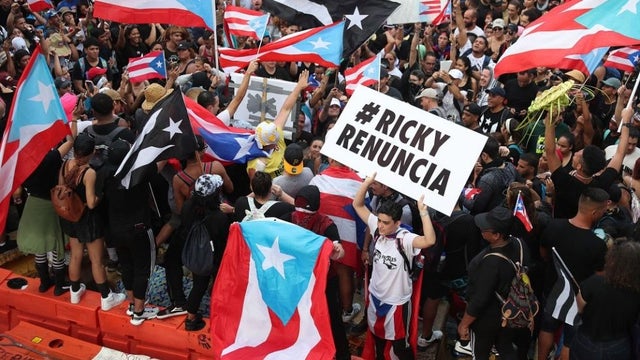 For united struggle against La Junta and US capitalism

This month a year ago, after two weeks of protests across Puerto Rico, the then governor, Ricardo Roselló, was forced to resign. La Fortaleza (the governor’s mansion) was surrounded by protests almost 24/7, culminating with a day of “Paro Nacional” (national strike) that occupied the main highways and paralyzed the economy of the island. They demanded the resignation of Roselló and that he take La Junta with him (La Junta is a US Congress-appointed Fiscal Control Board that oversees the debt restructuring of Puerto Rico). During the summer of 2019, Puerto Rico showed the power of workers and youth united behind a concrete demand with militant tactics.

A year later, however, his successor and party colleague Wanda Vazquez — who was Justice Secretary under Roselló — has not changed the reality of the archipelago that much. In September 2019 right after taking office, she appeared conciliatory inviting some of the main feminist organizations and unions to meet in La Fortaleza, something his predecessor never did. But it did not take long to prove that this was just lip service and that the old methods of corruption and cronyism never left La Fortaleza.

Renewed protests exploded when two government warehouses were discovered in January full of supplies never delivered to the victims of hurricane María (which caused over 4,600 deaths in 2017). More recently, in April, the government of Puerto Rico came under scrutiny for the purchase of overpriced Covid-19 tests amounting to $40 million of public money from companies with no previous experience in the field but with links to the party in power, the PNP. And now, Wanda herself is under investigation for forcing the resignation of the island’s Justice Secretary, Longo Quiñones, allegedly in retribution for investigating the governor’s mishandling of aid for victims of the earthquakes that struck the island in early 2020.

This is the latest in a series of political scandals that have rocked Puerto Rico since the ousting of governor Ricardo Rosselló last summer. However, given the low bar set by previous administrations and the lack of clear alternatives, Wanda has been able to appease the anger by quickly firing personnel in her administration. It’s likely that in the upcoming elections in November, the PNP keeps La Fortaleza with a victory by Pedro Pierluisi (who was appointed as governor by Roselló after his ousting but quickly demoted under pressure of the summer 2019 protests), who defeated Wanda in PNP primaries.

As across the world, the Covid-19 pandemic is creating havoc in the island with 35,375 confirmed cases and 477 deaths so far. There are no official unemployment numbers but it’s estimated that it could reach 40%. This comes after economic pressures have already pushed huge emigration towards the mainland (USA), particularly among the youth, with more Puerto Ricans now living in the mainland than in Puerto Rico. Making things worse, the economic help needed to sustain shelter-in-place (quarantine) measures took months to arrive to workers, causing public fury and the resignation of the labor secretary, Briseida Torres in June.

The Covid-19 pandemic is bringing to light the inadequacy of the healthcare system and infrastructures in Puerto Rico. The number of uninsured is currently estimated at almost 210,000 people, out of the 3.2 millions island’s population. More recently, the first tropical storm of the season, Isaías, left around 400,000 people without electricity (and therefore many unable to carry water to their homes). As with everywhere across the world, Covid-19 is unmasking the crude consequences of decades of capitalism’s underfunding, budget cuts and privatizations of public services and infrastructure, which in Puerto Rico is exacerbated by its colonial relationship with the USA and the corruption of the political elite.

But the summer of 2019 has indeed changed the island in some important ways. The continuous mobilizations of the retirees, the “pensionados”, pushed Wanda Vazquez to reject the latest proposal from La Junta because it protects shareholders more than the “pensionados”. The mismanagement of the government on different issues has quickly caused the resignation and firing of several officials in Wanda’s administration. The political elite is afraid of the workers and youth in Puerto Rico, and for good reasons!

United struggle against La Junta and US capitalism needed

However, the situation of Puerto Rico is not just due to inept and corrupt politicians, but to the colonial status of the island and the capitalist system itself, of which La Junta is the clearest expression as the chants of the summer 2019 highlighted. Workers and youth in Puerto Rico and the mainland face a common enemy, and the Covid-19 pandemic is bringing that to light. The protests after George Floyd murder in Minneapolis demonstrated that both in the mainland and in the archipelago we are ready to fight back, even challenging curfews or “toques de queda‘’ as Collectiva Feminista’s protests in the archipelago demonstrated in June. Now, teachers all the way from Puerto Rico to California are facing the threat of school reopenings driven by economic interests instead of the safety of teachers and students. The Federación de Maestros in Puerto Rico, one of the most progressive and militant unions in the island, is leading the effort to ensure the interests of educators and students are put at the forefront.

The USA capitalist class will try to make workers and youth pay for this crisis, in Puerto Rico and the mainland. As the summer of 2019 showed us, the key of our power is in uniting our struggles. The same capitalist system and political elite that is at the root of the deep inequality, racism and sexism in the mainland, perpetuates the colonial status of Puerto Rico. We have the opportunity to unite our struggles against our common enemy ensuring that it is workers and youth and not billionaires and their politicians who determine our future.