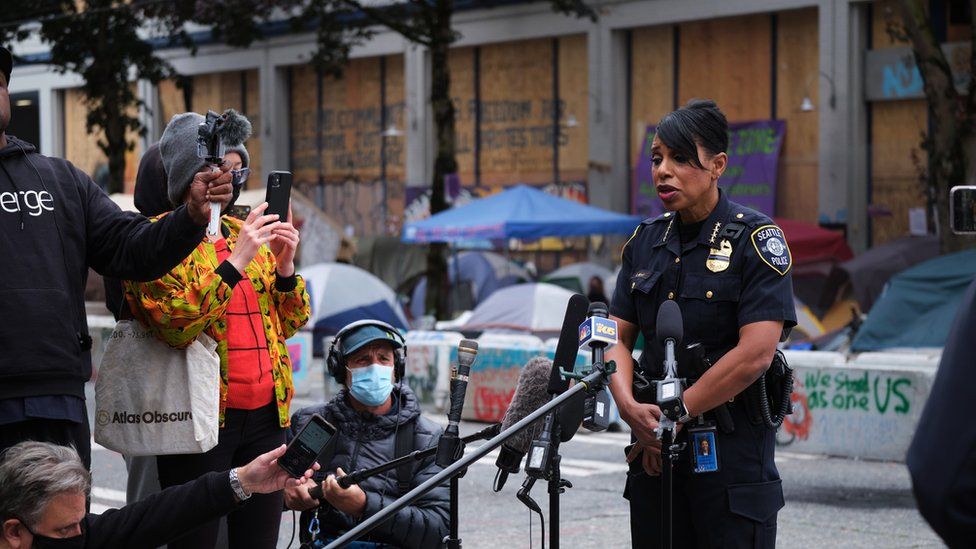 When Seattle Police Chief Carmen Best announced her pending retirement earlier this week, she joined more than half a dozen police chiefs around the country who have stepped down under pressure from the historic #JusticeForGeorgeFloyd uprising. The protest movement has been nothing short of an earthquake in American politics, exposing the endemic racism and police violence of US capitalism and putting mayors, police chiefs, and political establishments across the country on the defensive.

Like many of the other soon-to-be ex-police chiefs, Chief Best has repeatedly lashed out at the movement and its demands, calling the protests a “riot” and blaming activists for police violence. She also directed her fire at the City Council for its passage of minuscule cuts to Seattle Police Department (SPD) funding for the remainder of 2020, declaring that she was unwilling to carry them out. This meager 2 percent reduction in the police budget has fallen shockingly short of the 50 percent defunding promised only weeks before by 6 of the 8 Democrats, but it was too much for Best.

Best also cried foul at the City Council curbing bloated police executive pay to allow the funds to instead be used for Black and Brown community needs, saying the 7 percent cut to her over quarter-of-a-million-dollar ($294,000) salary, “felt vindictive and punitive.” A recent national survey of major-city police chief salaries showed Chief Best’s pay to be 45 percent above the national average, while SPD executives as a whole have among the highest salaries of all Seattle City executives, and 9 of the 13 SPD executives (Best included) make more money than all 50 state governors.

Perhaps most notable in Best’s comments during her resignation announcement was her affirmation to the SPD that “you truly are the best police department in the country.” This statement was nearly identical to her assessment at the time she was brought on as chief in 2018, when there were widespread hopes that she would carry out major reforms, showing her remarkably consistent and out-of-touch defense of a department that has been under a federal consent decree for racist policing and excessive use of force since 2011. Since the consent decree was put in place, another 28 people – disproportionately working-class people of color – have been killed by Seattle Police without a single officer being prosecuted.

The scale and dynamic of Seattle’s powerful protest movement over these last two months, which has inspired millions of ordinary people around the country, in some ways grew out of the shocking tactics used by the SPD in response to peaceful protestors. In an ominous forewarning of the crackdown to come, on the first night of the protests, May 29th, video was taken of a seven-year-old child maced by police officers. In response, rather than arresting the officers who committed this heinous assault, Seattle police under Best’s watch tracked down and arrested the photojournalist who captured the video.

Clouds of teargas soon filled the streets of Capitol Hill, along with the sounds and smells of flash bangs, pepper spray and rubber bullets used against nonviolent protesters, legal observers, and nurses. The severity of the Seattle Police crackdown on Black Lives Matter was also documented in shocking detail by a journalist at The Independent after his arrest while covering the Seattle protests.

When Best became chief two years ago, there were many community leaders who felt that she would carry out serious reforms in the department and would be accountable to Black and Brown communities because of her longtime community links and own experiences of racism as a Black woman in Seattle. Support for Best was further reinforced by completely-justified community outrage over her exclusion from the list of the top three finalists initially by Mayor Durkan.

At the time, because of the high hopes from many in Black and Brown communities, alongside outrage over the racist hiring process, I voted for Chief Best, despite fundamentally disagreeing with the expectation that she would be a change agent, as I said in my speech: “There are deep systemic problems here in Seattle, alongside a nationwide epidemic… I am not convinced that Chief Best is prepared to carry out the kind of fundamental transformation that is needed.”

Unfortunately, this assessment has been proven all too true. Best has not carried out any significant reforms of the department, nor has she held any of her officers responsible for ongoing police violence. Many people in Seattle were genuinely inspired to see the City finally appoint its first Black female police chief. While this was understandable, and it was correct that so many voiced outrage over her initial exclusion by Mayor Durkan, in our fight to end police brutality we cannot allow the diversification of police chiefs or other top appointments be a stand-in for the change that marginalized communities so desperately need.

Best was never a reformer. This is clear in her failure to fight for serious policy changes in the department, her consistent refusal to hold officers accountable, and perhaps most of all in her choice to retire now rather than to carry out the reforms demanded by the Black Lives Matter movement.

Best’s actions were guided at all times by her loyalty to the status quo and willingness to carry out the role of the police under capitalism: to defend the system’s deep inequality through ongoing repression of the poor, the marginalized, and communities of color. This creates a culture in police departments of racism, and of anti-poor, anti-working-class sentiments. The fact that Best is herself Black did not change that underlying reality. If Best had decided to pursue a path of radical reform, she would have faced massive resistance in the department, even more ferocious than that met by socialists in elected office under capitalism.

As I said at the appointment of Chief Best, “This is not a case of good and bad apples – the whole tree is rotten. The police and the state under capitalism enforce the interests of the billionaire class.”

The pressure from the Black Lives Matter movement has led to many sweeping promises of reform by Democratic Party politicians, many of which they are now working hard to walk back. This has already happened in Minneapolis, where the Democratic City Council have abdicated promises of “dismantling” the police department. And in Seattle, we saw how Mayor Durkan has remained hostile to defunding the police, and Democratic City Councilmembers completely failed to keep their public promises of 50 percent defunding in the Summer budget vote, and furthermore, approved an austerity budget after having promised an anti-austerity approach.

The response from the right wing to Chief Best’s resignation is revealing. Trump himself said “I hate to see her go”. Trump’s Attorney General, William Barr, tweeted: “I was disheartened to learn of the resignation of Seattle Police Chief Carmen Best.  Her leadership and demonstrated commitment to her oath of office, and reflected all that is good about America’s law enforcement.  In the face of mob violence, she drew the line in the sand and said, ‘Enough!’ Her example should be an inspiration to all who respect the rule of law and cherish safety and security in their communities. This experience should be a lesson to state and local leaders about the real costs of irresponsible proposals to defund the police.“

Meanwhile, the Wall Street Journal wrote: “In the name of Black Lives Matter, the progressives in Seattle have now pushed out a black police chief. In so doing, they have revealed that their efforts are not an attempt to correct police abuses, but an attack on policing itself.”

It is no accident that the Trump administration or corporate establishment should seek to lionize Best – they recognize the service she has provided the capitalist class in pushing back against the Black Lives Matter movement at the height of its power.

We cannot allow ourselves to be distracted, and must keep our focus on the key demands we are fighting for:

Round two of the People’s Budget will begin in September as the discussions begin on the 2021 budget. The pressure of a broad, multi-racial movement rooted in addressing the burning needs of working-class Black and Brown communities will be vital in whether we win a 50 percent defunding and far-reaching reforms of this racist police department, or whether the establishment succeeds in turning the tables against those reforms. This will be a crucial fight for all working people and the oppressed. The nation will be watching.