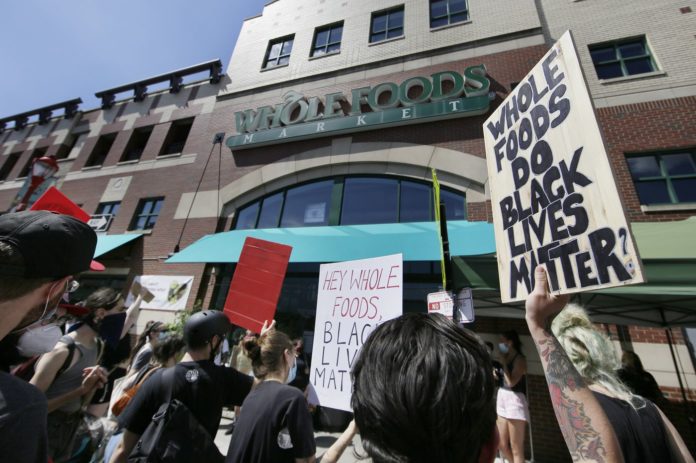 Whole Foods workers across the nation are taking up the fight for Black lives in the wake of the recent police slaughters of George Floyd, Breonna Taylor, Elijah McClain and others. Since early July, workers at the Cambridge, MA location have been sent home for refusing to take off their Black Lives Matter masks. Similar worker struggles have flared at stores in Portland, ME and Seattle, WA. Whole Foods workers across the country have filed a class action lawsuit against the company for lack of uniformity in their stance and application of company rules. The current demand is simple: workers have the right to show solidarity with the Black community by wearing these masks.

The Whole Foods Market webpage in July 2020 proclaims in large, bold lettering: “Racism has no place here.” Amazon, the parent company of Whole Foods, has donated over $10 million to organizations connected to the BLM movement, and promised to match donations made from June 17 to July 13 by employees of Amazon and Whole Foods to various organizations like the Equal Justice Initiative, NAACP, and the Black Lives Matter Foundation.

Amazon CEO Jeff Bezos has, on his personal Instagram page, shared and repudiated racist comments by customers upset about the company’s support of the BLM movement. “This sort of hate shouldn’t be allowed to hide in the shadows,” Bezos writes. “It’s important to make it visible.”

Despite their public statements and donations, Jeff Bezos and Whole Foods will not allow their frontline workers to wear Black Lives Matter masks in support of the movement. Workers have chosen this form of visible support to represent to customers and each other the same value the company claims to stand for: racism has no place at Whole Foods or in our community. Whole Foods has responded by sending in high-ranking company officials to intimidate workers in one-on-one discussions and handing out attendance points and corrective action notices which could lead to termination of their employment. These actions confound workers and customers: Is supporting Black lives part of the company’s values, or a fireable offense?

How has the resurgence of Black Lives Matter affected essential grocery workers?

The resurgence of the Black Lives Matter movement has inspired working-class people across all walks of life to take action, from union bus drivers refusing to drive arrested protesters in Minneapolis to solidarity work stoppages by the International Longshore and Warehouse Union.

Essential workers, who before COVID-19 were ignored and seen as unskilled,  are most at risk as they keep society running. At the beginning of the pandemic in March, grocery workers, including those from Whole Foods, had to fight for basic PPE, social distancing implementation, increased wages, and the requirement that masks be worn by employees and shoppers. A Black Amazon warehouse worker, Chris Smalls, was fired for calling Amazon out for lack of safety and transparency in COVID cases, and demanding a deep clean of his warehouse after multiple coworkers tested positive. Chris’s story became widespread when a leaked memo about him written by Amazon’s general counsel, David Zapolsky, stated: “He’s not smart, or articulate.”

Whole Foods claims to be taking measures to protect and adequately compensate its frontline workers during this pandemic, but has already cut it’s $2 per hour “hero pay” as the number of new cases in the U.S. grows at a rapid clip. Black working class people, who make up a large portion of whole foods store employees, are also the most likely demographic to die of COVID-19.

We ask Whole Foods workers to demand more than just symbolic recognition of Black lives mattering. Whole Foods must provide material protections and compensation in order to truly stand up for the lives of its largely black and brown team members. As we have seen by their symbolic acts and lack of follow through, it will take Whole Foods workers linking up economic demands with organizing to wear Black Lives Matter masks to win.

In addition to the demand for Whole Foods to allow the wearing of BLM masks, we demand:

Make up for Lost Pay for Protesting Workers!

Workers deserve to be paid for the hours they are forced to lose working as they stand up for the Black Lives Matter uprising.

Whole Foods employees were given only an extra $2 an hour for working during the COVID-19 pandemic. Coming from the richest company on the planet, this is a slap in the face to Amazon’s workers. What’s even worse, that extra pay ended on May 31. We demand that every Whole Foods worker receive actual hazard pay of 1.5x their salary for the duration of the COVID-19 pandemic. The pandemic is not over. It is becoming much more dangerous to be a front-line worker as cases in the U.S. spike to unprecedented levels.

Bring Back Call-Outs as Needed Without Penalty!

As front line workers, we demand the right to call out without fear of losing our jobs! When the pandemic first struck, Whole Foods workers were allowed to call out of work without pay in order to maintain the health and safety of us and our families. We demand that this right is reinstated.

During the first three months of 2020, Amazon’s revenue passed $75.4 billion. Amazon pays these employees so little that many are forced to use food stamps – effectively, the public is subsidizing Amazon’s profits. Amazon paid $0 in federal taxes for 2017 & 2018, and only 1.2% of it’s $13.9 billion in profits in 2019. It’s time for cities to stand up to Amazon. The Tax Amazon movement in Seattle just won a tax on big business that raises $240 million per year to fund affordable social housing in the city. With a sustained and organized movement, we can spread this fight nationwide.