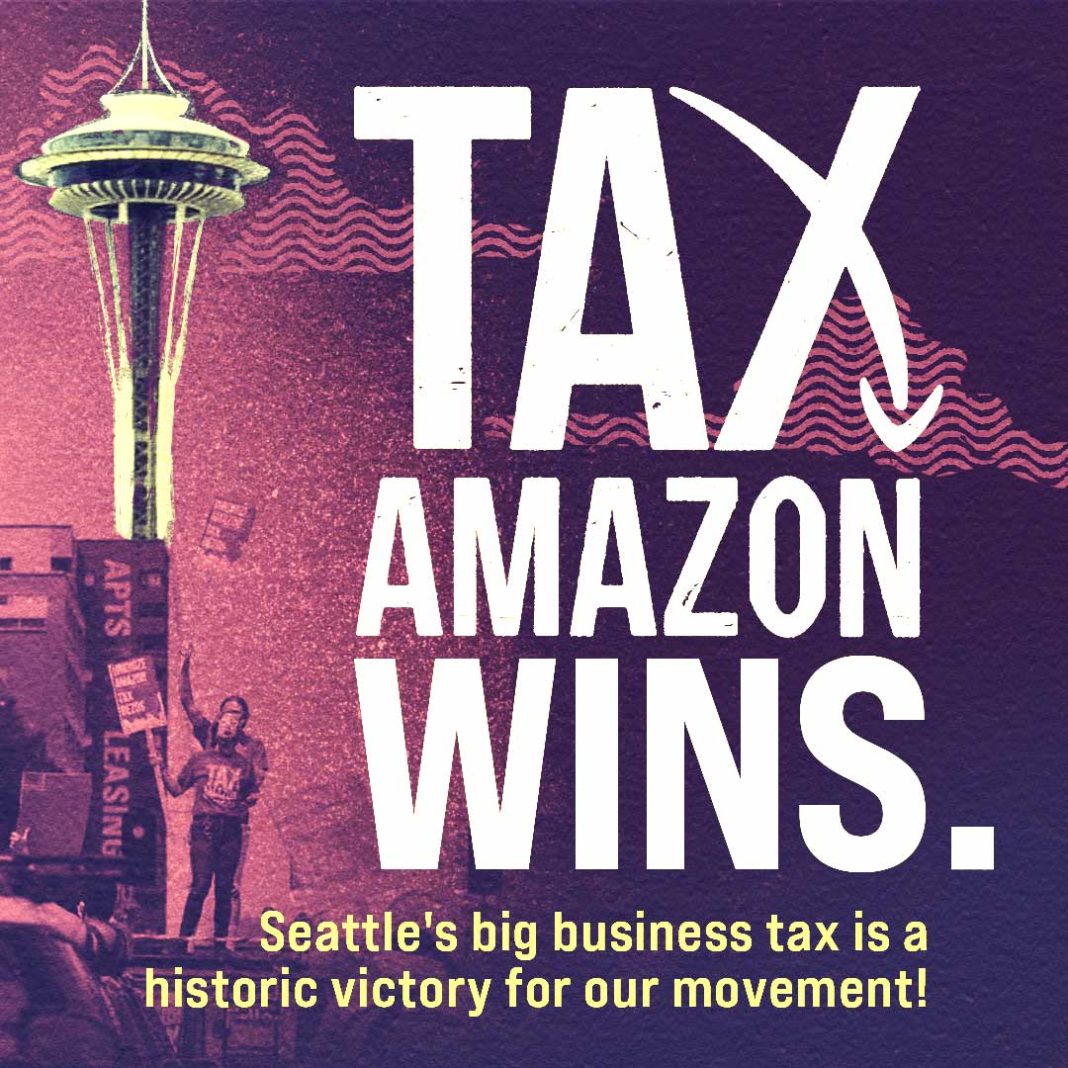 Below is the transcript of Socialist Councilmember Kshama Sawant’s speech just before the Seattle City Council’s Budget Committee voted 7-2 in favor of a tax on Amazon and big business.

Today’s vote to pass an Amazon Tax in Seattle will be a historic victory for working people. This victory was hard fought and it was hard won.

We should be clear, the only reason an Amazon tax was passed today in this budget committee is because of the strength of our movement. A movement that wouldn’t give up. That didn’t relent when Bezos bullied City Council in 2018 leading to the shameful repeal of that Amazon Tax by the majority of the Council. That didn’t back down when Bezos attempted a hostile takeover of our City Council last year, and handed him a massive defeat. That organized itself through a series of grassroots democratic “Action Conferences” where hundreds of people discussed and debated and voted on our strategy. That didn’t relent when corporate Democrats in the State Legislature attempted to create a ban on big business taxes in cities to block our movement. That didn’t relent when the corporate media went on an all out assault against our Tax Amazon movement. And not just in Seattle – no less than the Wall Street Journal editorial board, loyal servants of the capitalist class, wrote two op-eds attacking our movement.

Our movement didn’t slow down when the pandemic and recession hit in full force and made face-to-face activity almost impossible for many weeks. We did not stop when we faced unfounded delays in this City Council. We are here today because of the solidarity and determination of working people to smash all obstacles that stood in our way. Because that is what our class is made of.

This victory had nothing to do with “Third Doors” or “One Tables” or other meaningless artifices of big business to distract from what took place these past months: an all out fight between the billionaire class and Seattle’s working people. This victory had everything to do with the huge sacrifices of thousands of people, of their time and energy over these past months, and indeed years, in this fight to begin to end Seattle’s corporate tax haven and make big business pay, not working people. It had everything to do with the Black Lives Matter rebellion which broke out in Minneapolis in response to the brutal police murder of George Floyd and then spread around the country.

The legitimacy of the status quo has been utterly smashed by the nationwide protest movement, the pandemic, and the deepening crisis of capitalism. In Seattle, Tax Amazon was widely taken up at the Justice for George Floyd protests with more than 20,000 protestors signing in 20 days in support of Tax Amazon. And Tax Amazon volunteers, without paid signature gatherers, have now gathered a total of 27,000 signatures in just one month to put a $300 million Amazon tax on the ballot, proving the massive public support.

This victory had everything to do with working-class solidarity against racism, against oppression, and against economic injustice. It is because of the unity of workers, the oppressed, labor organizations, progressive community organizations, and socialist organizations in this fight. Because of our powerful multi-racial movement.

We did not win everything we wanted. This Amazon Tax, as it stands – and the final vote is not until Monday – is less than half of the $500 million our movement proposed. This bill does not include the $293 million we fought for to reverse the attacks against social services in Durkan’s pro-corporate austerity budget.

But we defeated the sunset clause and we quadrupled the revenues compared to the Amazon Tax that we had won in 2018.

We should be clear: what needs a sunset in this city is not this modest big business tax. What needs a sunset is racist policing, the nation’s most regressive tax system, the Mayor’s vicious homeless sweeps, the bankrupt administration of Mayor Jenny Durkan itself, and the brutal reign of capital over working people, people of color, and the poor, here and globally.

While I disagree with other Councilmembers on their amendments watering down of the legislation, I want to acknowledge their support and votes for the passage of this Amazon Tax. I want to thank Councilmember Morales for her support for the strong Amazon Tax proposal we put forward together in solidarity with the movement.

And I also strongly disagree with other Councilmembers comments that this legislation is somehow fundamentally different than the 2018 proposal. The difference now is not in the weeds of the bills, it is in the strength of our Tax Amazon movement.

We should be clear the movement is the only thing which made this victory possible – all the working people and all the progressive unions and community organizations that fought tooth and nail to make this happen and forced the City Council to act. We should recognize that the additional $40 million that was won today – while less than what we proposed – is still a victory entirely due to the pressure of our movement to demand funding for the Green New Deal and 1,000 Central District homes.

As we have seen again and again since I was first elected in 2013, what is won, or not won, in the Seattle City Council is based entirely on the strength of our movements – on the balance of power between the working class and the ruling class. Our Tax Amazon movement was strong enough to defeat Jeff Bezos, but not strong enough to stop all the corporate loopholes.

While this legislation is far less than what ordinary people need in this deeply unequal city, it is nonetheless a historic victory.

We will do everything we can to spread our movement. Our rallying cry everywhere must be: NO to austerity under this pandemic and recession! Tax Amazon and big business, not working people! We must build on this rebellion against the ruling class, as we did with the $15 minimum wage, to make it a national and global fight. Jeff Bezos, we are coming for you – for you and your billionaire friends – here and everywhere.

In this struggle, we were clear eyed about naming the real power pulling the strings in Seattle: Amazon. Many argued that we should not “antagonize” big business and instead try to broker a deal, but we know that our power comes from the self organization of the working class, not from negotiation with the elite. If you are listening to this from another city, don’t let anyone tell you in your fight to tax big business that you’re being divisive, because class struggle is what gets the goods.

We must build on our momentum here and immediately take the energy of this historic victory toward the fight to defund the Seattle police by at least 50% – bloated budgets for police departments should face cuts, not education and vital community programs. The fight for black liberation will also mean campaigning for elected community oversight boards with full powers over the police, including hiring and firing. We need democratic oversight to begin to root out police brutality.

Of course it is not just about Bezos or Amazon. And we must go much further, because progressive taxes will not be enough to create a just society, with affordable housing for all and a sustainable economy and decent life for everyone, let alone a society that can deliver a high standard of living to all while winning against the climate catastrophe.

The private, for-profit housing market has utterly failed working people. Not just in Seattle but across Washington. Not just in the United States, but globally. Not just now, but always.

Because capitalism is completely incapable of meeting the most basic needs of working people. It is completely incapable of avoiding climate catastrophe. We need to take the big private development corporations and banks into democratic public ownership, run by workers, to provide affordable housing for all. And we need to do the same with the big energy corporations, to enact a real Green New Deal and beyond to stop climate catastrophe. We will need to take the top 500 corporations into democratic public ownership, and create a workers’ government that can end capitalism once and for all.

Of course, we’re not done yet even with this fight for a modest tax on big business in one city. The final vote on this Amazon Tax legislation will take place at next Monday’s full council meeting. And even then there will be further votes on the allocations in the spending plan.

We will remain vigilant, we will not relent. We will fight until the final day, the final hour, against all the corporate loopholes, against all attacks on our Amazon Tax, and we will fight to further strengthen the legislation. The movement will need to democratically decide, at the next Action Conference, whether to accept this Amazon Tax or take the fight to November.

If big business again tries to overturn the victory, our movement will go all out to the doors and onto the streets in the thousands to defeat them once again, and we will go further.

Because you see we are fighting for far more than this tax, we are preparing the ground for a different kind of society. And if the ruling class wants to drive that process forward by lashing out against us in our modest demands, then so be it. Because we are coming for the corporate elite, for the ruling class and for their rotten system. We are coming to dismantle this deeply oppressive, racist, sexist, utterly bankrupt system of capitalism, this police state. We cannot and will not stop until it is dismantled, and we replace it with a socialist world, based on solidarity, genuine democracy, and equality.