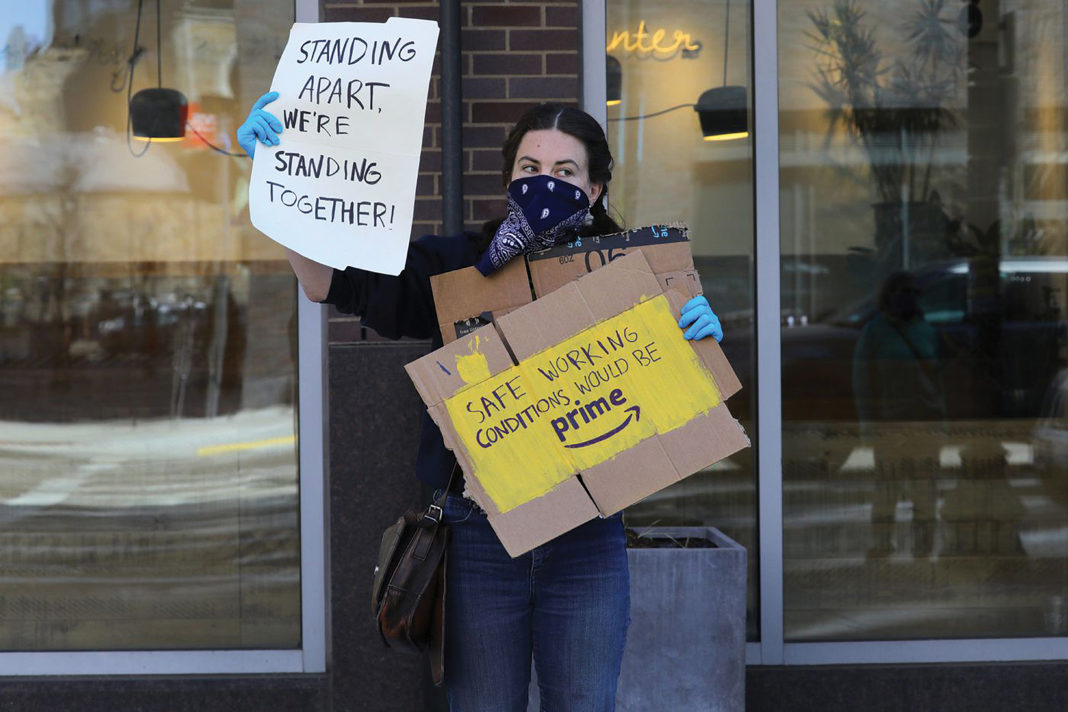 If it wasn’t obvious before, it is clear as day now: working people make this economy run. While billionaire hoarders and corporations get bailed out and millions of us are laid off, workers on the frontlines have been risking everything to deliver essential goods and services for society. While politicians and CEOs didn’t prepare to provide the necessary safety equipment or health system needed in this crisis, frontline workers have been taking action to “flatten the curve” of this tragedy.

Everybody now recognizes that the heroes of this pandemic are the workers in health care, retail, grocery, food production, transit, logistics, education, and beyond. Workers, union and non-union, have also been getting organized and taking action to fight for safety, wages, rights, and benefits. Victories have been won through strikes, protests, and walkouts by Detroit transit workers, Colorado Joann Fabrics retail workers, Boston grocery workers, and many more.

Corporations like Amazon have been retaliating by firing non-union worker organizers who are trying to protect themselves, their co-workers, and their communities. Politicians from both parties, including Democrats in Nevada and Minnesota, are attempting to suspend union contracts and collective bargaining rights while the federal government is trying to make it harder to organize unions. Faced with a deadly lack of safety and the threat of mass unemployment, millions of workers are looking to continue and intensify the fight against the billionaire hoarders who are trying to turn us all into sacrificial lambs at the altar of their profits.

Over three million people signed the “Rent Strike 2020” petition initiated by socialist truck driver and Congressional candidate Joshua Collins that demands a suspension of rent, mortgage, and utility payments with no debt owed. To win these demands, renters are getting organized across the country to plan “rent strike” actions. This type of organizing with clear, bold demands, audacious action and creative use of “social distancing” organizing on social media and in our communities, is the type of example union leaders should be pointing to.

While workers are getting organized on the job and in their communities, most union leaders are lagging behind and failing to take action. If unions put their resources behind coordinated action on May 1 for keeping all workers on payroll at full pay, rent cancellation, Medicare for All, safe workplaces, and other clear demands, then millions of workers would be inspired to get organized. If big unions took decisive action, then the discussion about “reopening the economy” would include debates about workplace democracy and the vast inequality of capitalism exposed by this pandemic. Instead, union leaders are often focusing their resources on getting Joe Biden elected, a loyal servant of Wall Street who has been largely absent during this crisis and fails to inspire working people.

Some unions and workplace actions are showing the way forward though, and we should build on this. Socialist Alternative has initiated Workers Speak Out, and leaders of walkouts at the Amazon warehouse facility in Staten Island, the Joann fabrics strike in Colorado, the Instacart walkout, and other organizing attempts at non-union workplaces have come together through this effort. The Amalgamated Transit Union (ATU) Local 1005 in Minneapolis, with Socialist Alternative members helping to lead the effort, won free transit fares for all and is providing safety equipment for workers.

Democratic Socialists of America (DSA) and the United Electrical Workers (UE) have also initiated efforts to help non-union workers organize. If these efforts by socialists were taken up by much bigger unions, it could lead to one of the biggest organizing drives in the history of this country. Some bigger unions, like National Nurses United (NNU), have done an excellent job in organizing social distance protests and making clear demands for workplace safety and Medicare for All. Yet the rest of the union leadership has gone missing, just like their friend Joe Biden.

Unions are at their best when they fight for all working-class and oppressed people. There is a mass mood for organizing drives at workplaces across the country as more and more people are realizing the billionaires and politicians aren’t going to solve our problems. Millions are also feeling backed into a corner by this pandemic and are thinking about striking back. Big unions should follow the lead of the socialists organizing non-union workplaces, the nurses unions organizing protests, and Rent Strike 2020 activists. May 1 can be a flashpoint of united struggle to show our potential power.

If union leaders don’t step up, then they need to get out of the way. Rank-and-file workers in unions with weak leaderships should build caucuses with clear demands and a strategy to take struggles forward to replace the current leaders. Non-union workers should get organized and reach out to fighting unions like UE and NNU.

In every upturn of union organizing, socialists played a key role – from the 1930s and ‘40s to the 1960s and ‘70s. Socialists know that working people make the economy run and have the power to shut down capitalism. Through organizing collectively, we can change the world from one run for the greed of a few to a global system based on cooperation, solidarity, and a planned economy to benefit people and the planet.

We don’t want a return to “normal.” The capitalist “normal” after this pandemic subsides will be mass unemployment and an attempt to make working people pay for a crisis that capitalism made worse. We need to get organized and fight for workplace democracy and building the power of unions, renters organizations, the unemployed, and the oppressed. This can lay the basis for creating a new “normal” of socialist change.