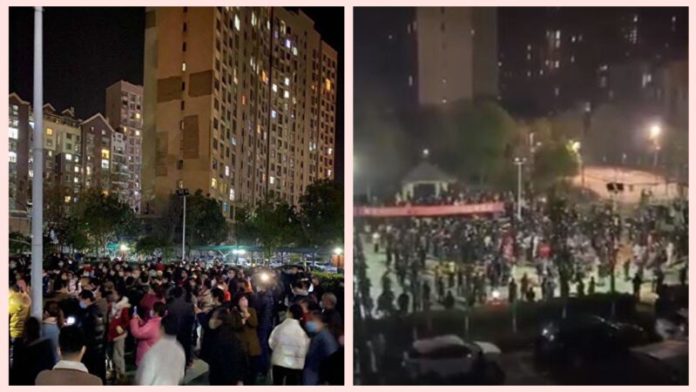 On April 8, the 76-day lockdown imposed on the metropolis of Wuhan (11 million inhabitants) ended. Similar COVID-19 lockdowns in the rest of Hubei province, where Wuhan is the provincial capital, ended two weeks earlier. At the height of the coronavirus outbreak in China, 760 million people – around half the population – were under some form of lockdown.

Chine’s state media and propaganda machinery have lauded the heroism of the people of Wuhan and especially the frontline medical staff, but for nationalistic purposes, to portray a “united” effort of “the whole Chinese people” against the virus.

This propaganda is designed to boost the authority of Xi Jinping’s dictatorship and the CCP regime, and deflect attention from its many missteps and blunders in January, ignoring and actively suppressing reports from doctors and censoring all discussion of the new “SARS-like” illness which was spreading in Wuhan. The official cover-up included allowing a banquet attended by 40,000 families, with a nationalistic pro-CCP theme, to go ahead in Wuhan’s Baibuting district on January 18. This was just two days before Beijing declared a national emergency and five days before the lockdown was imposed on Hubei province. The Baibuting district would later be designated “fever buildings”, with one of the city’s highest rates of infection.

The true story of Wuhan and Hubei is not reflected in the CCP’s triumphalist propaganda. It is a story of immense human suffering, acute shortages of essential medical supplies, manipulated statistics that understate the true scale of infections and deaths, and profiteering in food and medical supplies by private companies and the local agencies of the CCP-state. Officially, 2,535 people have died of COVID-19 in Wuhan, but independent experts in Hong Kong and overseas believe the real figure could be ten times higher.

“The trauma suffered by people in Wuhan is huge, for sure. Many people who sought medical treatment experienced the misery of crying out for help but receiving none, which I believe made them deeply hopeless. Those who died are gone, but their loved ones are still around, and they all experienced moments of great despair,” writes Fang Fang, a well known blogger who has spent 76 days locked down in Wuhan.

The official version of the lockdown as a clinical, brutally efficient, exercise is also false. Only travel into and out of the city was affected by the initial January 23 decree. There was enormous confusion and lack of clear information from the authorities. Wuhan’s government imposed no restrictions on people moving around inside the city, including suspected patients, until more centralized quarantine rules were announced on February 2. These were further strengthened on February 8. Methods employed during the subsequent extremely stringent lockdown were sometimes brutal. Gates and doors to residential buildings were barricaded and even welded together in some cases. Trenches were dug across some roads to render them impassable.

Caixin, a financial website which is allowed greater leeway by the CCP’s censors because it is not read by the masses, described the Wuhan lockdown as “brutal natural selection”. Caixin’s reporters in Wuhan interviewed staff in community healthcare clinics, whose task was to screen and distinguish between patients that needed to be hospitalized or sent home. On January 27, in an interview with one such community clinic in Baofeng district they found, “that the 60-staff clinic only had one protective suit and a limited stock of single use masks. Yang Qinghong, a doctor at the clinic, said he interviewed 100 patients that day, including more than 30 with fevers and two with severe symptoms.”

Thousands of medical professionals were mobilized from the rest of China into Wuhan. Again this heroic endeavor has been milked to the maximum by the state propaganda machine to extol the “advantages” of an authoritarian regime. Among this human wave of healthcare volunteers were two nurses from Guangdong province who on February 24 published an appeal in Britain’s Lancet magazine.

“The conditions and environment here in Wuhan are more difficult and extreme than we could ever have imagined,” they wrote. Under government pressure the authors retracted their letter some days later.

The conditions described in Wuhan and Hubei’s hospitals, of acute shortages, long hours and exhaustion, and in Wuhan alone more than 3,000 healthcare workers infected with COVID-19, have since been replicated in Italy, Spain, Britain and the US. With the advantage of a much longer period of forewarning it is criminal that these governments were so unprepared. But China’s regime censors have worked overtime to airbrush away all its deficiencies and present its “victory” against the pandemic as a model.

Doctors, including Li Wenliang who died of COVID-19 on February 7, tried to sound the alarm in late December 2019, but were arrested and silenced. Senior doctor, Ai Fen, the head of Emergency at Wuhan Central hospital, went missing on April 1 and is believed to have been “disappeared” by state security after she gave an interview with Australian media. Ai was one of the first whistle blowers who attempted to warn her colleagues about the new coronavirus in December. Had these warnings been heeded and acted upon then Wuhan, China, and the whole world, could have avoided the catastrophic spread of the pandemic today.

In recent weeks as the conditions during lockdown have become ever more unbearable, several protests have erupted, as Zhou Yi reports:

In March, several protests occurred in Hubei province, the epicenter of COVID-19 pandemic, indicating that there is a huge gap between reality and the “positive energy” propaganda of the Communist Party of China (CCP). In particular, anger is directed against profiteering by officials and local businesses that have exploited the disaster. In conditions of lockdown, where normal shopping is suspended as residents are banned from going out, food distribution has been centralized in the hands of the local neighborhood committees, which are the management committees of residential compounds comprised of property company and CCP representatives.

On the March 5, in Kaiyuan Mansion in Wuhan, during a visit by Sun Chunlan, China’s vice premier, residents who were isolated in their homes for more than forty days shouted, “Fake! Fake! It’s all fake!”. Residents shouted because the “sufficient supply and stable price” image shown on television was a fabrication.

In reality, the price of meat purchased by the residential community was 100 yuan per kilogram, five times the price reported on the TV. Other neighborhood committees were found to have transported food in garbage trucks (pictured), ambulances and sanitation vehicles. Despite claims that the vehicles were disinfected, this was still being criticized by the majority of netizens.

On March 10, Xi Jinping paid Wuhan a visit for the first time since the January 23 lockdown. There has been massive criticism of the regime and even of Xi personally, for the mismanagement of the crisis especially in the early stages. Xi’s visit had two purposes: To show the whole world but especially the Chinese population the CCP had “defeated” the virus at its epicenter, but also to boost Xi’s badly dented image.

The massive personality cult around Xi portrays him as the “People’s Leader”, a title previously only held by Mao Zedong. But in Wuhan, Xi generally avoided meeting the people. On a visit to a residential compound, the inhabitants were told to stay indoors – out of fear there could be protests as occurred during Sun’s visit. Most other events in Xi’s itinerary were conducted by video conference, for example with groups of frontline healthcare workers at the Huoshenshan Hospital. “In the end, he went to Wuhan to make video calls,” was one comment – soon removed – on social media.

On the March 12, in Xiaogan, about 100 kilometers from Wuhan, a resident surnamed Cheng contacted a supplier of fresh vegetables with lower prices, but was reported to the police by RT-Mart and the property management. Later, police arrested Cheng, sparking anger among the residents. More than 100 residents gathered at the basketball court to protest. They surrounded police cars and demanded his release. They also demanded that Lyu Deshan, the secretary of the CCP committee in the community and director of the owners’ committee, who did not live locally, step down.

The subsequent officialese response to this incident by Xiaogan’s government downplayed the issue of overpriced vegetables and did not explain whether the arrested resident was released or not. According to online comments, food was always overpriced and poor quality during the lockdown. Local officials could gain more than 1,000 yuan per person per day unfairly from their monopoly of supply. This arrest of a ‘trouble maker’ was clearly to silence a threat to this lucrative business arrangement between the supermarket and local officials.

During the period of lockdown, which began from January 23 and is scheduled to be lifted on April 8, food prices skyrocketed and the quality could not be guaranteed, which demonstrated that by monopolizing supplies and raising the prices of daily necessities, the local agencies of the CCP regime exploited the disaster and put profit for officials and business people before the needs of the people. A genuine socialist society would never allow this to happen because the working class would be in control, through democratic committees in every residential area, school and workplace, instead of today’s rule by a party machine that serves unelected bureaucrats and capitalist profiteers.

In response to official data showing “zero new cases” in Hubei province, lockdown in cities in Hubei (excluding Wuhan) was lifted on the March 25. However, Hubei residents with green QR codes (green code means healthy) were still facing obstacles to their entry to other provinces. On the March 27, Jiangxi Jiujiang traffic police set up a blockade on the bridge between Hubei province and Jiangxi province to stop Hubei vehicles crossing.

At the start, Jiujiang police clashed with the police from Huangmei (a county in Huanggang, Hubei), and sent riot police as backup for the Jiangxi side. With people from Hubei continuously arriving, the clash evolved into a large-scale riot. Dissatisfied with still-prevalent discrimination, Hubei people confronted the Jiangxi police fiercely at the Yangtze River Bridge, overturned police vehicles, broke through the blockade, walked to Jiujiang Bridge police station, and demanded an apology from Jiangxi police. The video of this tumult was quickly deleted on Sina Weibo.

In order to obtain a bonus of 100,000 yuan per person and respond to the central government’s call for resumption of work and production, officials in every province have been concealing the extent of the pandemic, while local governments know the real situation and are afraid that there will be a massive outbreak which eventually can become impossible to cover up in their areas.

Therefore, even if the risk level of Hubei province has been downgraded, governments in other provinces are still “taking precautions against and restricting Hubei residents” as People’s Daily commented. This is also illustrated from the tightening of controls in Beijing (the capital of China) and prohibiting people on business trips and family visits in Hubei from returning to Beijing.

Obviously, this kind of “regionalism” goes against the propaganda of the central government and the state-owned media about a united ‘people’s war’ against the pandemic, and more people are becoming skeptical of the official reports.

Demanding either price controls for daily necessities or transparency of information will inevitably challenge the Chinese state capitalist system, where power is increasingly being centralized in the hands of one person. Workers across China need to overcome “regionalism”, by building common organizations especially independent and fully democratic trade unions, to unite and overthrow the CCP dictatorship, and in its place build a democratic socialist society where the means of production are commonly owned and the economy is put under worker’s democratic control.