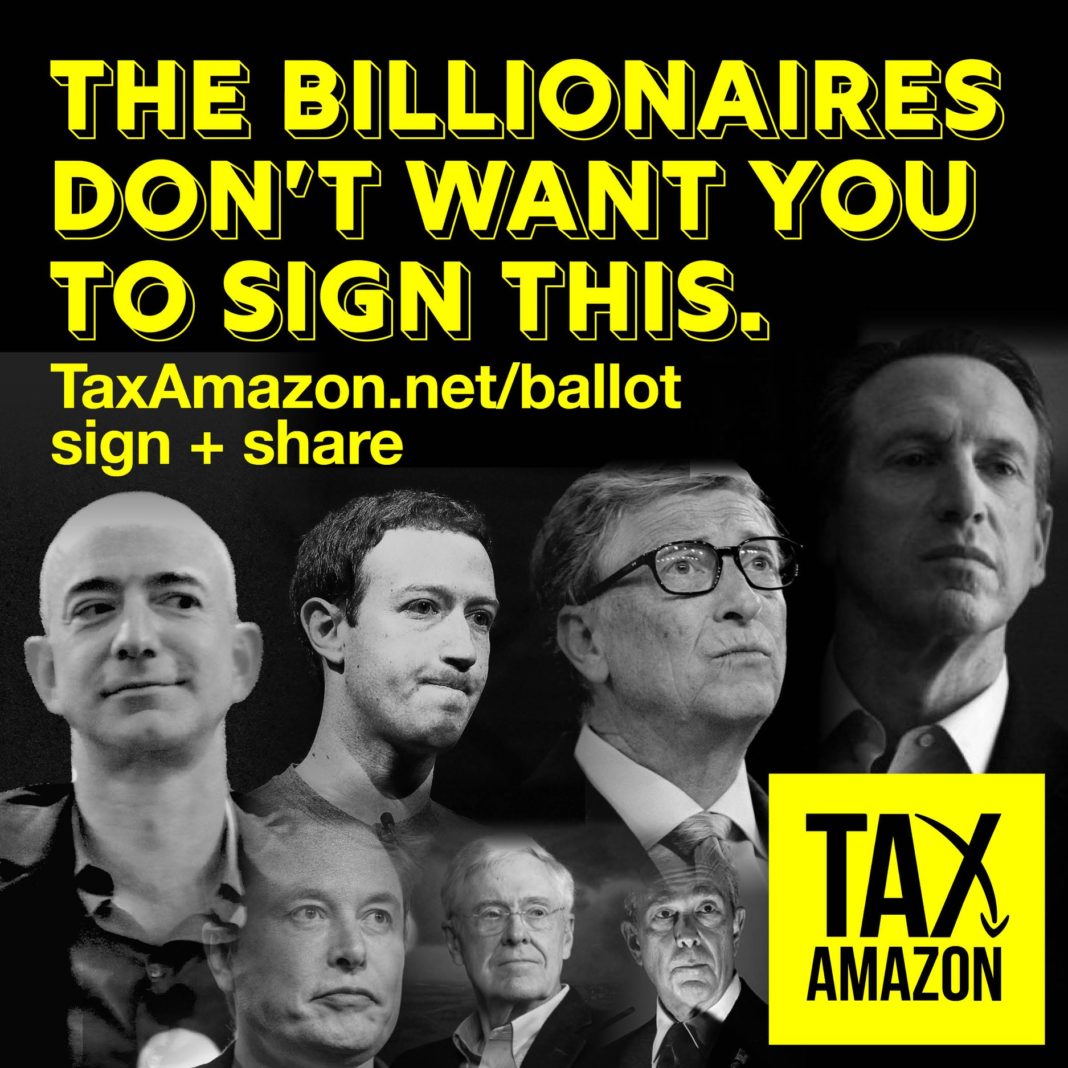 On Saturday, April 4, the Tax Amazon campaign hosted a virtual signature gathering launch for ballot initiative I-131. The initiative would build up to 8,000 new permanently affordable homes over the next ten years, and upgrade tens of thousands of homes to Green New Deal standards through a tax on the biggest companies in the city.

Nearly 150 volunteers attended the event, listening to speakers from labor unions, frontline workers, tech workers, and Socialist Alternative member Kshama Sawant, who is leading the fight in Seattle City Council. In the rally before getting to making phone calls, the campaign was able to raise nearly $6000 dollars to help build the movement to make big business pay for a major housing and jobs program!

The event started with Matt Smith, a delivery worker for Amazon and member of Socialist Alternative, describing how Amazon and its subsidiary Whole Foods have seen an enormously profitable surge in demand, with workers not seeing that benefit. Lacking basic safety provisions like hand sanitizer, gloves, masks, or paid sick leave, many Amazon workers have been taking action since the pandemic, which only added to notorious grievances of deplorable working conditions and recent firings of workers for speaking out.

“This is not a new crisis for working people,” said Matt, “It’s an acceleration of an existing crisis, where working people are living paycheck to paycheck. It has become even more urgent that we tax big business to fund the things that working people need.”

Sawant highlighted how the state has no provisions for remotely collecting signatures, effectively stifling what basic democracy we have. To get our tax on the ballot, we need a powerful online and phone-banking outreach campaign to collect 30,000 signatures from Seattle voters in the coming months. In the interest of public health and the social distancing urged by scientists, we’re demanding that Washington State accept online petition signatures that we collect digitally.

We have a two-pronged strategy to get our initiative on the ballot. We will gather digital signatures and build pressure to make the state accept them, but because we know the state does not act in the interest of working people, we won’t rely on that and will be doing mass mailings and phone-banking to get print signatures mailed in as well.

The other point is pressuring the City Council to pass legislation brought forward by Kshama Sawant and councilmember Tammy Morales that would immediately implement a $200 million in COVID-19 relief for workers that would roll into an annual tax on big business for $500 million to build social housing.

If you live in Seattle, please sign the petition here. If you want to help build our movement, volunteer here.

Winning this campaign, even just winning the fight to get Tax Amazon on the ballot, will be an uphill battle. However, while looking at the difficulty of getting the signatures in the context of COVID-19, we must look at what is at stake for working people in this fight. The ruling class and their politicians are running off with trillions of dollars while workers are sick, unemployed, can’t afford rent, and are staring down a recession. This begs the question of who will pay for this crisis? Tax Amazon provides our movements with the answer: Make big business pay for the crisis of their system, not working people!