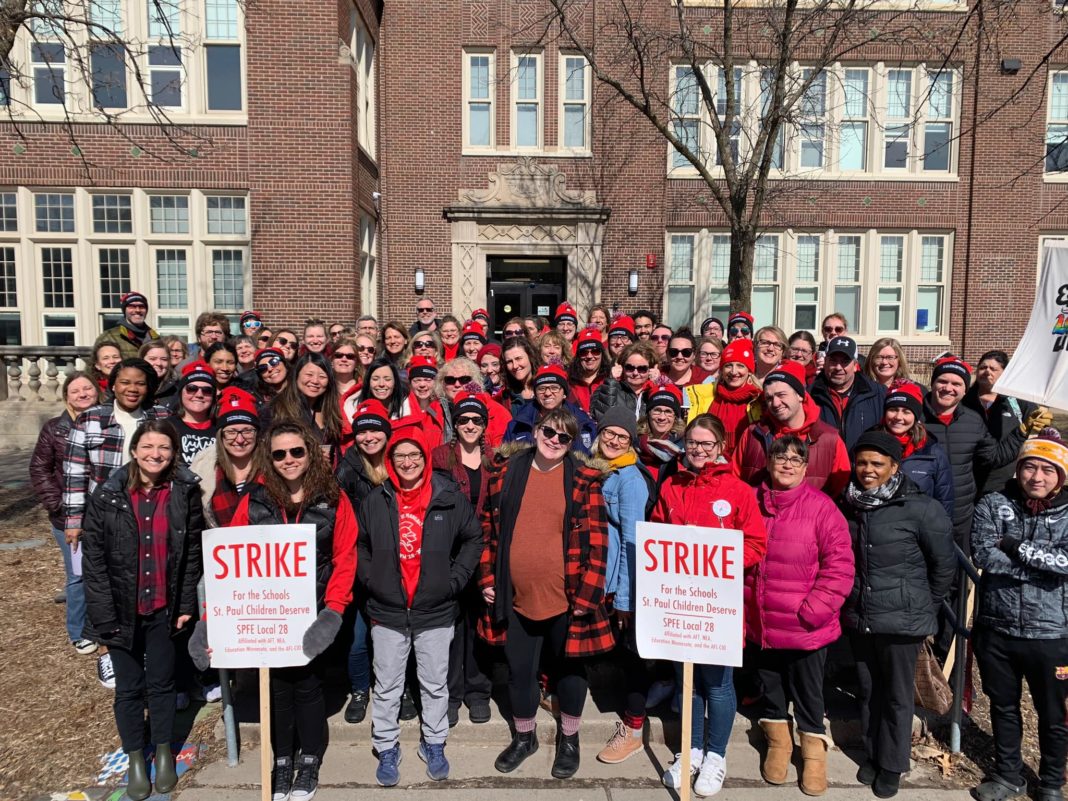 On March 10 before COVID-19 lockdowns were fully in place, 3,600 teachers, educational assistants and licensed professionals at Minnesota’s second largest school district went out on strike across 65 sites at St. Paul Public Schools. Educators who are members of St. Paul Federation of Educators (SPFE) were on strike for four days, reaching a tentative agreement with the St. Paul school district on March 13. Educators went out on the picket lines with the slogan, “Schools St. Paul Students Deserve” demanding a contract that guarantees their students more mental-health support, that ensures non-English speaking families can access school services and that reduces special-ed caseloads. St. Paul educators entered the struggle for better public schools as the latest in the #RedForEd strike wave with picket lines at each school during the day and mega rallies in the afternoons during the course of the three day strike.

Adam Burch, Bus Operator for Metro Transit, member of ATU Local 1005, and member of Socialist Alternative, sat down to interview Laura Madsen, a special education teacher and her building’s strike captain, to discuss the strike.

Adam Burch: The past two years have experienced the most workers on strike in the U.S. since the 1970’s. Teachers #RedForEd actions have played a leading role in this resurgence. Were you inspired by these broader events? Why did St. Paul educators take the step to go on strike?

Laura Madsen: Above all, we as educators were fed up with the excuse that there simply was not money to meet the needs of our students. This is the narrative in so many sectors, and it just isn’t true! Educators knew the funds were there, but it needed to be re-distributed to prioritize meeting the needs of St Paul’s diverse student population. Those in education are fiercely dedicated to giving our students the very best, and the contract the district was putting forward fell infuriatingly short. Absolutely, we were inspired and emboldened by the huge gains others had won! The Chicago Teacher’s Strike won literally every demand they put on the bargaining table over their three week strike, very similar demands to our own. Educators from Chicago were able to send members with their valuable experiences in organizing to help out in St Paul. Seeing that long list of victories from around the country, each representing tangible changes in classrooms, gave us the confidence that we could do the same here.

Burch: Presidential candidate Bernie Sanders tweeted out support for the strike. This wasn’t the first time he stood with workers. Earlier this year he tweeted support for snow plow drivers organized with the Teamsters, who were forced to strike as well. Did this have an impact on the mood in the strike?

Madsen: Having Bernie publicly support our strike definitely provided a morale boost on the picket line! When we were standing in front of our little school building that first morning with our 40 person staff and only the occasional car passing by, it felt surreal to be getting national attention from a major presidential candidate. What Bernie did was to connect our fight to the wider movement. Seeing the bigger picture reminds us that each little building strike combines with strikes at the other buildings, and in other districts, and in all the other unions, adding up to the working class rising up and demanding a better future. Bernie’s platform of Medicare for All, a Green New Deal, and Free College for All is exactly the kind of future we want for our students. Bernie knows, just like the educators of St Paul, that these things are possible if we prioritize the resources we already have to provide basic needs for the many, not profits for a few.

Burch: The strike came up against the growing coronavirus pandemic and the threat of school closures. How did the rank-and-file respond to this, and what was won by taking action? Were there actions that could have been taken to strengthen the union’s position?

Madsen: It was scary going on strike with COVID-19 creeping closer to Minnesota. The rank-and-file membership was worried that we would be stuck with no agreement and no leverage when the schools did need to close, leaving teachers without a paycheck or medical insurance, and students indefinitely without teachers. The bargaining team seemed to know that they would only have a few days before it was no longer feasible for us to keep striking. Had a pandemic not been a factor, do I think we would have won more? Yes. But the saying goes, “the longer the picket line, the shorter the strike.” So our response with this limited time was to mobilize as many people as we could, filling the streets and getting wider community support, to make the biggest impact we could in the shortest amount of time. And it worked! Even with our position somewhat compromised, we won gains for our students in the form of $4.7 million in mental health staff that will work directly with students, decreased caseload limits for special education staff so we can provide quality instruction, and increased access to language interpretation for school staff to communicate more effectively with all families.