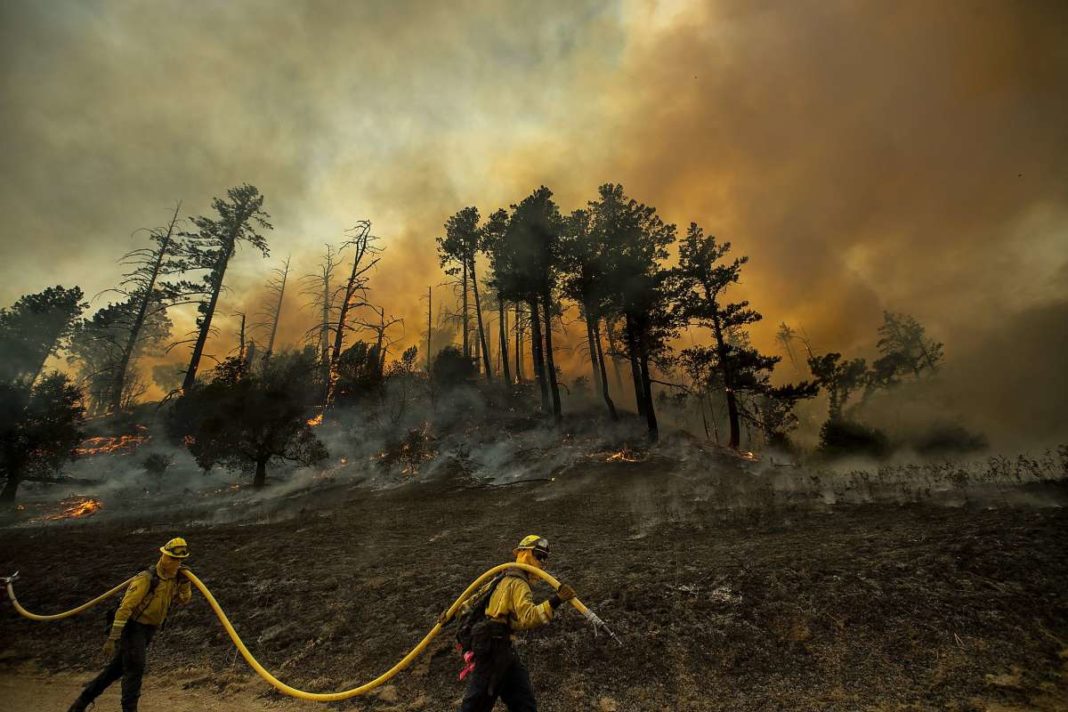 Saturday night at a high school homecoming dance in Oakland, the lights went out twice before the school finally cancelled the event. Each time the music stopped the chant went up among the working-class teens gathered “Fuck PG&E! Fuck PG&E!” The anger at the private utility that controls the electric grid for 39 million Californians is deep and broad.

Hundreds of thousands of Californians this weekend are receiving texts to evacuate as fires rapidly rage across the state. Many millions will also be receiving warnings from the private utility company, PG&E, that their electricity will be cut for at least 48 hours as a part of a deliberate blackout to avoid more fires. The Democratic governor, sensing the rising anger, referred to the blackout as “unacceptable” and characterized it as “Issues of corporate greed meeting issues of climate change that have created these conditions.”

American capitalism barely spends anything on infrastructure anymore, preferring to simply extract profits wherever they can. The high October winds are entirely predictable and if power lines were underground, as they often are around the world, millions of Bay Area residents would not be losing their electrical power.  Many elderley and sick Californians on respirators at home are now facing a crisis. PG&E already has blood on its hands. Their continuous neglect in maintaining the infrastructure that tens of millions of people rely on has led to a terrible series of fire tragedies. Despite PG&E’s power outages designed to prevent a fire outbreak, they were unable to avert the outbreak this week of the Kincade fire in Sonoma County causing the largest mass evacuation in the county’s history

This follows a string of deadly PG&E disasters in recent years. Eight people were killed in the San Bruno pipeline explosion in 2010. Last year, 85 people died when the town of Paradise was burned to the ground and many millions of Californians suffered the toxic smoke. Two years ago, the Santa Rosa Tubbs Fire destroyed nearly 3,000 homes. PG&E’s equipment was also found to have faltered near the outbreak of  the current Kincade fire, and 24 of those killed in the Northern California fires of 2017 died in fires sparked by PG&E.

Extracting Profits a Priority for PG&E

PG&E’s poor maintenance, lack of investment, and neglect of the changing climate has been central to the increased threat of fires in California. This private corporation has been cited over and over again for insufficient maintenance of its equipment. A federal judge recently said it plainly: PG&E has been placing shareholder profit over people’s safety.

Now PG&E is trying to avoid further lawsuits with a strategy of unilaterally shutting off the power to areas threatened by their poor equipment. They are essentially punishing Californians for their own lack of infrastructure investment. The first blackouts affected more than two million residents and the current wave of outages is unlikely to be the last. This appears to be a new man-made hazard of living in California. The number of residents living in the path of wildfires is constantly growing as climate change creates the conditions for faster-moving and more dangerous fires.

PG&E could have spent the last decade upgrading and maintaining its systems, including transitioning away from fossil fuels, but our safety is a lower priority than their CEO bonuses and shareholders’ wallets. The California Public Utilities Committee (CPUC), the government body tasked with overseeing utility companies has failed to represent the public’s interest and allowed PG&E’s rampant mismanagement and corruption. PG&E, currently in bankruptcy due in part to claims from fire victims, still sees fit to pay its executives bonuses of $11 million. The utility extracted big profits for decades while letting its operations fall into more and more dangerous disrepair. The city of San Francisco made an offer to buy PG&E within city limits and operate it as a public utility. PG&E is fighting that.

The fiasco of PG&E is just one example of the capitalist system’s broader inability to keep up with the basic requirements of making society function. In the face of catastrophic climate change, capitalism is showing that it is unable to take society forward. Infrastructure is falling apart, in spite of the fact that California is the world’s eighth-largest economy! The crumbling of its energy provision system illustrates the dead end this economic system is facing.

California Governor Newsom, echoing the frustration of PG&E ratepayers has criticized PG&E for their negligence, but went on to say, “It’s time for them to do the right thing — get out of bankruptcy and get this system into the 21st century.”

Socialist Alternative disagrees. As we have argued the right thing to do is to take the generation and provision of energy out of private hands. To make plans to avert the worst consequences of climate change, including California’s catastrophic wildfires, we need to begin by taking PG&E into public ownership, democratically run by the utility workers and ratepayers. This should be part of a national Green New Deal as Bernie Sanders has called for with public ownership of renewable energy.

The Governor and state legislators need to act immediately to back up cities that want to nationalize their utilities and should introduced legislation for a state takeover of PG&E with compensation to shareholders based only on proven need. The ratepayers paid for the current PG&E infrastructure – we should not be paying rich shareholders again and again.

Watchdog groups controlled by the current political establishment, like the CPUC, have proven themselves to be unwilling and unable to force private companies to maintain the power grid safely. California needs to put massive investment into immediately taking carbon out of the generation of energy and taking the necessary steps to making the electricity system safe and stable. We need hundreds of socialists in office up and down the state that will fight for this.

Private enterprise is in the wings ready to sell us face masks for the smoke likely to engulf the Bay Area next week. This is the profit-based market response to crisis. This economic model has long ceased to represent progress for humanity. We need a democratic plan for society based on the needs of the majority.