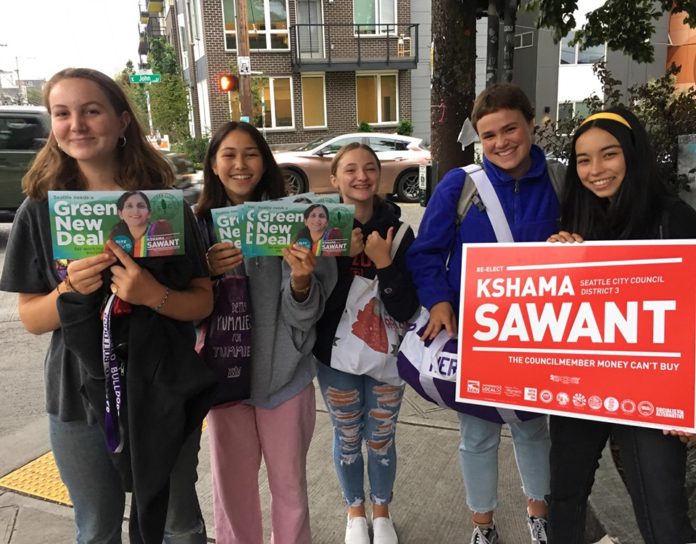 Seattle’s socialist city Councilmember Kshama Sawant is throwing down the gauntlet to other elected officials in the city: will they support workers (including over 1,000 Amazon workers and members of the Seattle Education Association) and students participating in the global Climate Strike this Friday?

Millions of working-class and young people around the world are preparing to take part in the Climate Strike to protest the lack of political action on climate change. One of the main goals of this worldwide movement is to highlight the fact that action is needed NOW – we can’t afford to wait years for the usual political “process” to start making radical changes, and we will use collective action to shut down our workplaces and schools to make it happen.

Yet while many powerful politicians (including all leading Democratic presidential candidates) are now paying lip service to the Climate Strike, elected officials who’s parties are beholden to big business are under extreme pressure to minimize the strike’s disruption to the flow of profits.

By sponsoring a resolution supporting and reaffirming the right of city workers to participate in the strike without retaliation, Councilmember Sawant and Socialist Alternative are showing how elected representatives who genuinely represent the interests of working people can use their offices to help empower workers and build for this historic day of action.

In addition to the resolution, which passed by a unanimous vote on Monday, Councilmember Sawant sent a public letter to the Seattle School Board calling on them to follow the example of the New York City School Board and “respect Seattle students’ right to participate in the global climate strike and excuse them from classes on Friday, September 20.”

“After decades of inaction by corporate politicians and a recent report by the U.N. Intergovernmental Panel on Climate Change giving humanity just 12 years before surpassing a critical threshold of 1.5 degrees Celsius of warming,” wrote Sawant, “young people are correct to be outraged, and they have no choice but to take action. Seattle Public Schools should stand with the global climate justice movement.”