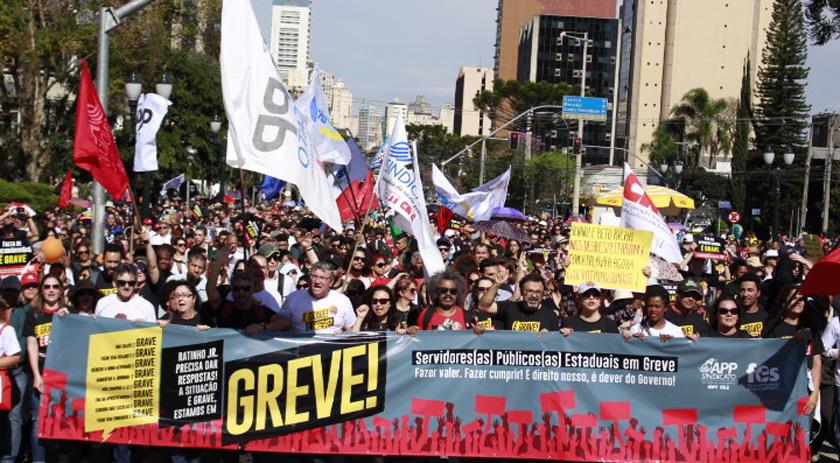 On June 14, the metro system of São Paulo, the most populous city in Brazil and one of the largest in the world with 12.8 million residents, was ground to a standstill as thousands of transit workers went on strike. The usually-packed trains that make possible all activity in this crucial economic center were operational only on a few of the system’s lines, and could service only a trickle of passengers throughout the day. Cities like Belo Horizonte, Salvador, and the capital of Brasília saw total shutdowns of their transit systems. In total, transit systems were shut down in nine out of Brazil’s 26 states.

These thousands of transit workers joined workers in education, the steel industry, and other sectors for a general strike estimated to have drawn out 40 million people throughout the country, making this month’s strike comparable in size to the general strike in Brazil in 2017.

Notably, education workers, in grade schools and universities, seem to have shown the most national cohesiveness, as practically all schools throughout the country shut down. Teachers are facing barbaric cuts to education at the hands of recently elected President Jair Bolsonaro’s far-right administration. In a country where universities are largely state-funded, many are facing 15% cuts to their budgets. Thousands of students may have their second semester cancelled in the middle of the school-year, as some university workers are being pushed into trying to “crowdsource” funding for their schools’ electric bills.

The 2017 strikes were an attempt to defend against the vicious attacks of interim-President Michel Temer’s administration on the rights of working people and labor unions to organize. Today millions of Brazilians are mobilizing against Bolsonaro’s attempts to gut the country’s retirement fund, similar to Social Security in the United States.

Temer’s hugely unpopular government, put in place via an anti-democratic parliamentary coup of Dilma Rouseff of the PT (Workers’ Party) in 2016, was seen by the right as too vulnerable to push through these cuts to retirement. Copying the playbook drafted by the recent rise of far-right politicians in various parts of the globe, big corporations used complaints of corruption in establishment politics to ally big business with small business owners, and build a force to erode the gains workers won under PT administrations. Having served his purpose, Temer’s corporate handlers replaced him with Bolsonaro, a particularly dangerous, viciously homophobic, mysoginistic, right-wing career politician who was able to sweep into the presidency this year with the kind of popular support seen as necessary to push through further cuts.

Much like Donald Trump claiming to “drain the swamp,” Bolsonaro ran last year on a platform of supposedly ridding Brazil of corruption. But, now he has to defend his anti-worker economic agenda in front of the country. At the same time as his administration faces a huge corruption scandal surrounding his now-Minister of Justice and Public Safety Sergio Moro who helped propel Bolsonaro to the presidency, Bolsonaro is realizing that his policies of cutting taxes and selling public wealth to the rich at the expense of working people and public services is deeply unpopular. Six months into his term, this president has seen his favorability ratings drop 20%, the steepest and earliest decline in popularity any president has seen since the fall of the military dictatorship in the ‘80s.

In response, mass movements are growing. Paralleling the experience of the 2017 Women’s March, which was the largest day of protest in U.S. history, the massive #EleNão (#NotHim) protest against the violently misogynistic candidate Bolsonaro was one of the biggest in Brazil’s history. Protesters clogged over a hundred cities in the country, and were accompanied by solidarity demonstrations throughout the globe. Similarly, the threat of cuts to retirement, education, and public services have mobilized a huge response, particularly on the part of students.

But the mass resistance of ordinary Brazilians organizing in their schools and neighborhoods won’t be enough to force the hand of Bolsonaro and his capitalist cronies without the organized working class bringing their social power to bear. This month’s strike actions are a positive step in that direction.

In the U.S., a national strike of tens of millions would send the capitalist class, unused to mass labor resistance, into a panic. However in Brazil the strike’s effects were limited because the leaderships of the unions did not fully commit. The large federations of trade unions in the country hesitated in following the movement into the strike, and were underprepared to make the strike as effective as possible. In São Paulo, the critically important bus drivers’ union backed out of the strike at the last minute, and the city had prepared to keep a minimum of metro lines open to prevent the strike from having a larger economic impact. The 2017 general strike was bigger and more well-organized, and though it delayed the vicious attack on union rights, they were eventually pushed through when popular anger had left the streets.

Socialist Alternative stands in solidarity with Liberdade, Socialismo, Revolução (Liberty, Socialism, Revolution – CWI Brazil), who have intervened in labor and popular struggles throughout the country, as well run candidates for elected office alongside PSoL (Socialism and Liberty Party). Our co-thinkers in LSR call for the local unions and national trade federations to mobilize the indignant mood in the country into organized groups, in every factory, office, classroom, and neighborhood. These will be necessary to prepare a more decisive general strike including a complete shutdown of key pillars of the economy, from schools and city transit to commercial transportation, the steel industry, and the shipping centers across the country’s coast where workers load and unload billions of dollars worth of international trade. This is the way that Bolsonaro’s attack on the pension system can be defeated, the first step in defeating the entire reactionary agenda of the right.