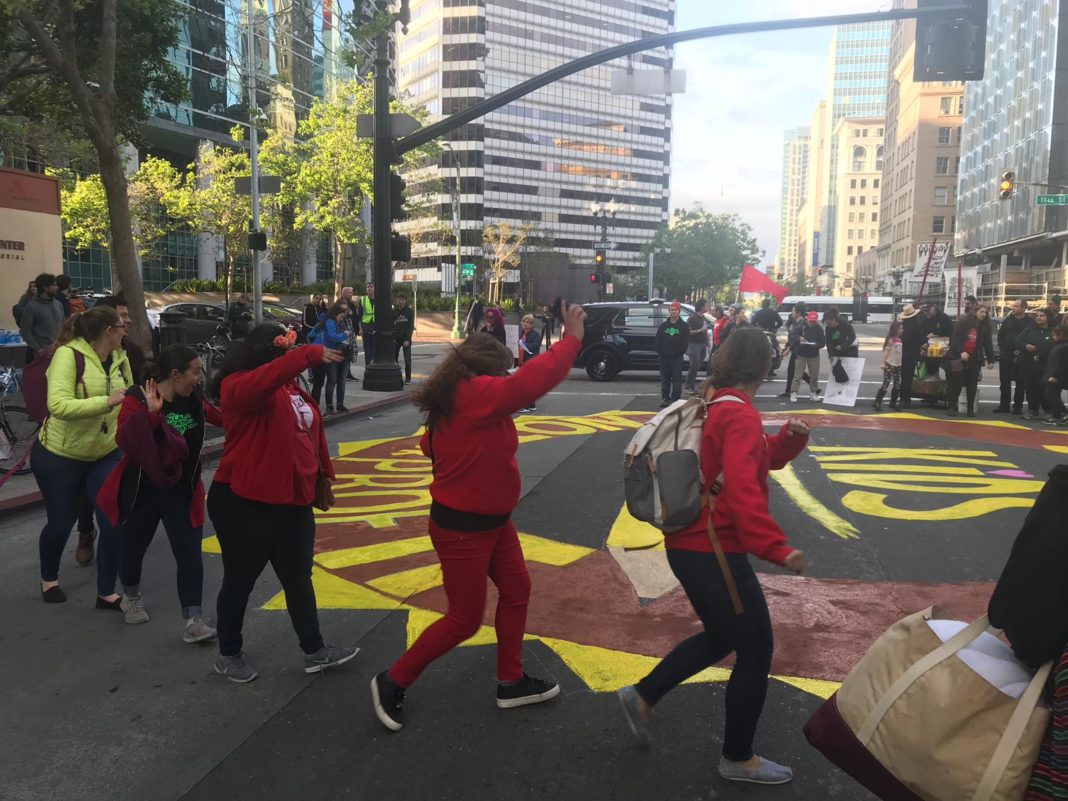 On May 8, two-hundred teachers, parents, students, and community members gathered outside the Downtown Oakland Marriott to protest the NewSchools Venture Fund (NSVF) annual summit. The Oakland Education Association (OEA) and Socialist Alternative called the action together to show the billionaires behind the NSVF – like the Waltons, Gates, and Zuckerberg – that they were unwelcome in Oakland.

Coming in the wake of the seven-day Oakland teachers’ strike earlier this year, this action showed that OEA aims to keep fighting back against the privatization of public education. This is part of a series of actions in May building up to May 22, a statewide day of action in the capitol. The success of the NewSchools protest was is the result of a newly revitalized movement for public education which has brought together many groups from the community, including (in addition to OEA and Socialist Alternative) Oakland Public Education Network (OPEN), Democratic Socialist of America, and unions in the area.

The NSVF is known for financing various pro-charter interests including GO Public Schools in Oakland, whose headquarters were protested on the second day of the Oakland Teachers strike. Some attendees of the NSVF Summit were surprised to hear about the true agenda of the fund due to the fund’s false pro-education narrative and others stopped to reiterate the pro-charter school arguments that we have responded to in our previous article. Challenging these corporate talking points will be important for the movement going forward.

Chants of “Billionaires can’t teach our kids!” and “Charter schools have got to go” came as the crowd took over the street and painted the slogan “Schools for Kids/Not For Profit” in front of the Marriott.

Erin Brightwell, an Oakland parent and Socialist Alternative member, spoke at the rally and called for “a grassroots slate of candidates to replace the school board with people who will refuse to make cuts, who will refuse to close down schools, and will stand up to the authorities at the state – backed up by the movement we are all building here today.” Other speakers echoed this call, as the need to replace the charter backed school board is clear as the School Board plans to close 24 public schools.

Chaz Garcia and Ismael Amendariz, the vice presidents of OEA, spoke to the need to fight back against the privatization of public education and the importance of the May 22 day of action. Steve Young, an Oakland parent, spoke about his experience with the school board refusing to listen to the parents at his school (one of the 24 schools being threatened with closure) because of pressure from their charter school backers. Mike Hutchinson of OPEN detailed the many connections between NSVF and pro-charter organizations like GO Public Schools and Oakland Reach.

When it was announced to protesters that inside the billionaires’ banquet, the unionized servers were wearing OEA buttons, a huge roar of support went up. As the street sign was finishing up we could see faces peering down from the hotel shocked at the huge pro-public education message stretching across the street.

On May 17, OEA will meet with public school advocates and community members to organize against the planned school closures. On May 22, more than 500 people are booked to take the union busses to Sacramento with demands including increased funding for public education through progressive taxation, partial demands to curb charter schools, and racial and social justice. Teachers statewide will also be joining Sacramento teachers on the picket lines for the Sacramento City Teachers Association’s (SCTA) one-day strike.

This rally confirmed that the Oakland community is not stopping the fight for public education with the end of the teachers strike. The teachers, parents and students of Oakland will continue to fight back against the privatization of Oakland schools by billionaire profiteers  and for the schools students deserve.