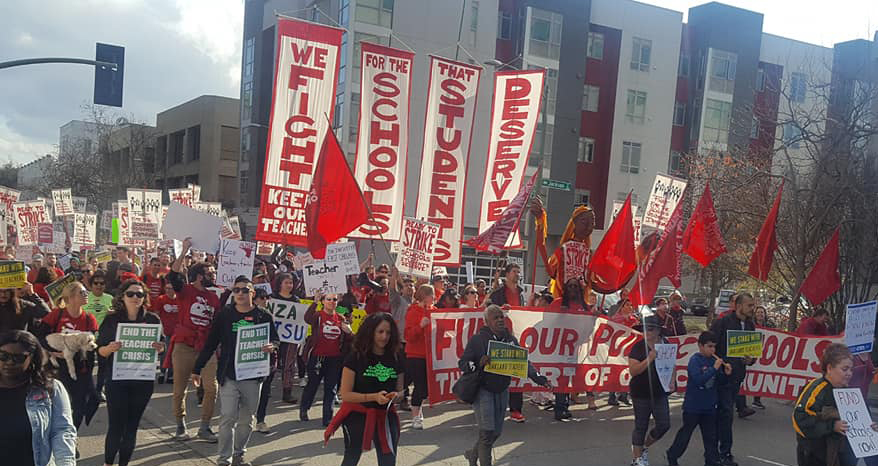 “I’ve been waiting for this moment for years!” was the sentiment of many teachers at Skyline High where over a hundred blocked the school entrance.

Teachers have faced the daily toll of dramatic underfunding. Special ed teachers can barely maintain their anger at how their students have suffered through decades of cuts. The hope is that this strike will be a turning point in the direction of public education in Oakland.

The people of Oakland have turned out in the thousands on picket lines and are keeping their kids home from school. The magnificent level of parent and student support is reflected in first strike-day numbers show many elementary schools and middle schools with less than one percent of students going into struck buildings. Some schools on the second day had zero student attendance. This level of support is unprecedented. In the 1996 strike, up to 30% of students went to school. Today, there is a significant shift to the left in consciousness: the strike has galvanized a wider anger at the economic setbacks all Oaklanders feel.

Strike day two’s rally converged on the headquarters of the school district’s main driving force for privatization, the misnamed Great Oakland (GO) Public Schools. “GO” arrived in Oakland over a decade ago, funded by local and national billionaires, to promote charter schools as a stepping stone to privatization. A critical element of their campaign was to make public education a bad experience for teachers, parents, and students. The district would underfund schools, parents would pull their kids out and put them in billionaire-subsidized charter schools. Falling enrollment would lead to closing schools and an open market for new charters. The one problem they faced was the resistance of the Oakland Education Association.

OEA leaders have helped educate their own members and the parent community as a whole on the privatization plans of the District. Charters are increasingly recognized for what they really are.

“Billionaires can’t teach our kids!” was the chant echoing through the streets of West Oakland as the public education community members rallied at GO headquarters. People laughed out loud when they heard that parents had surprised GO CEO Jonathan Klein at 6 am that morning with a chorus of the labor song, “Which Side Are You On?”

The teachers’ demands for a 12% pay hike, smaller class sizes, and more support staff are welcomed by parents, but the OEA decision to fold-in the demand for no school closures has parents cheering. At a recent citywide meeting of a hundred parent organizers, this demand won huge applause. The district superintendent was practically run out of a Kaiser Elementary meeting of parents over their proposed closure. Parents are done with the district’s destabilization efforts. It’s increasingly accepted that the fox is running the henhouse, that the district intends to destroy public education and make itself disappear – as recently happened in the New Orleans school district.

Teachers have been preparing for this strike for many, many months. As other teachers in Los Angeles, Denver, and again in West Virginia took to the streets and won their battles, teachers in Oakland were eagerly checking their phones and discussing in their lunch rooms. On Thursday, February 21, Oakland teachers struck, most of them for the first time in their lives.

At the 86 schools, yellow special ed buses were allowed through, but all deliveries were stopped. The $300-a-day teaching scabs were few and far between, although some snuck in super early on day one. One or two at each school was barely going to make a difference. The district is losing $9 million a day for the 33,000-34,000 students not crossing the picket lines. The OEA’s approach of mass mobilization, of explaining the wider issues at play, and of uniting teachers and parents has had an incredible effect.

Oakland’s establishment are paying lip service, supporting the teachers because it is politically expedient, but preparing to undermine the movement where it can get away with it. The city agreed to open its rec centers for OEA Solidarity Schools where parents could drop their kids and not cross the line. On day one, its inspectors confiscated free sandwiches for not being refrigerated – parents yelled at them, “our kids take sandwiches like these to school every day!”

The police have mainly stood aside, but at some point the district may seek injunctions against mass picketing, which will potentially inflame all the picket lines. The mass media have also been pushing the district’s arguments: that Oakland is broke, that several kids crossed picket lines, and have been silent on the poverty pay of new teachers and the District’s plan to privatize.

While California’s governor and Oakland’s mayor are both friends of the charter model, they have continued to make vague statements to support the teachers. Rumors of Kamala Harris visiting picket lines to promote her race for president were nixed when the OEA refused to let that happen. In stark contrast, Bernie Sanders tweeted the specific demands of the teachers and the need to win on the picket lines. The announcement of Bernie running again was received enthusiastically among the most active teachers. Teachers in Oakland recognize that this strike is also a fight against the billionaire class, the enemy Bernie often points to.

What we are witnessing in Oakland is the convergence of a series of teacher victories around the country, severely sharp battle lines drawn in Oakland, and in the background a national discussion about Medicare for All verses the business model of health care. The pro-market neoliberals that have caused such harm to working-class people hate being identified for what they do. In Oakland, the revolt against the billionaire class has begun to unfold.

Perspectives for the Strike

Most of the teacher strikes nationally have been relatively short. Huge public support has created a political vulnerability for politicians who don’t want to be seen as anti-teacher. In Oakland, the district board appears to be indifferent to the solid picket lines that are costing it millions daily. However, as the strike continues to point politically at the district’s behind-the-scenes privatization, the board will likely find more money for the contract. If the strike continues as solidly as it began, they may even agree to temporarily keep some schools open, hoping to restart that fight after the strike.

The OEA members have mandated negotiators to not come back with an offer that does not include higher pay, smaller class size, more support staff, or school closures. But the last demand would put a halt to the entire decades-long agenda of the district. In 1996, the OEA strike lasted for five weeks. A long strike cannot be ruled out this time as well given the high stakes for both sides. While a strong picket line does hurt the district financially, this movement needs to shake up the entire picture in Oakland, linking with the generalized anger at inequality in the city.

Currently, teachers in San Francisco are discussing a district-wide sickout this Thursday. Solidarity workplace actions and teacher sickouts across the Bay Area in support of the OEA and their demands would be an important next step. Longer term, the union should consider running independent candidates for school board who are committed to dismantling the districts’ plans and willing to undo the top-down priorities of the Board.

The leadership of organized labor, the OEA, is in the spotlight, pointing toward a different direction for Oakland. In previous fights against school closures, the district pitted parent against parent, black against brown, white against black. Now, the student leaders of the movement are chanting “the schools united, will never be defeated!” Parent leaders are aware that the union folding school closures into contract negotiations gives the movement incredible leverage. Under OEA leadership, the anti-privatization movement has suddenly become mainstream and widely discussed.

One parent high fived another at the end of a school-wide meeting, “we gotta turn this shit around!” That is what is beginning in Oakland.