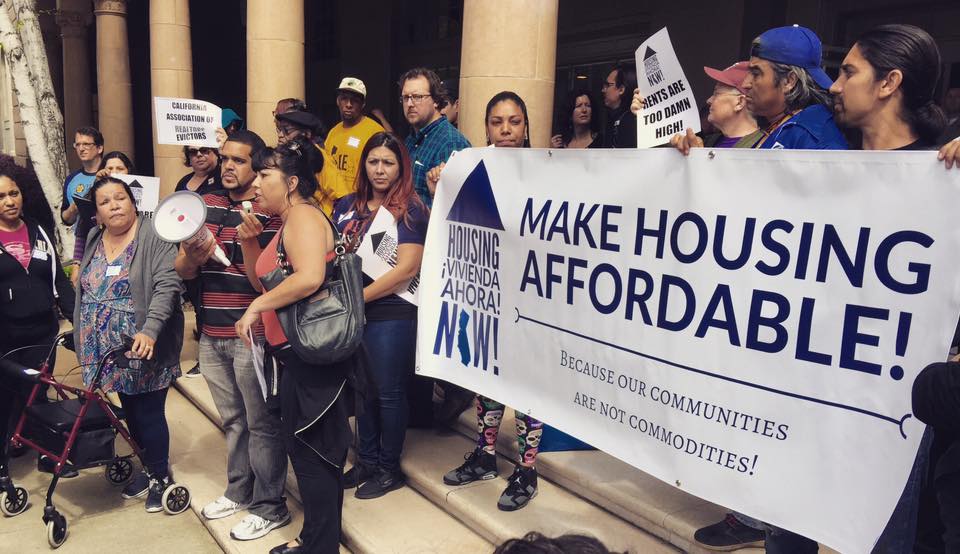 Build a Socialist Movement for the California We Need!

On November 6, California voters defeated Proposition 10, a measure which would have repealed the state’s rent control ban and opened the door to the possibility of winning statewide rent control. As a result,  millions of working-class tenants throughout the state will continue to suffer unaffordable rent hikes and economic evictions. Given the severity of California’s housing crisis and the growing crisis of housing affordability nationwide, it’s critical to draw lessons from this defeat in order to strengthen our movements going forward.

The Prop 10 defeat can be attributed to two main factors: a failure to base the struggle squarely on the support of working-class families who stood to benefit most from its passage, and an underestimation of the ruthlessness with which the billionaire class would oppose the legislation. While the defeat is undoubtedly a setback for California workers, the thousands of regular people and seasoned activists mobilized by the Housing Now coalition to fight for Prop 10’s passage saw firsthand how real estate developers, landlords, and their lobbies spent $80 million dollars to defeat Prop 10 by spreading lies and misinformation. This exposure of the willingness of big business to manipulate the political process at the expense of ordinary people will leave a lasting impression and result in better prepared struggles in the future.

In fact, just days after the election results came in members of Housing Now staged a bold occupation of the lobby of the Santa Monica offices of The Blackstone Group, a real estate and private equity firm that donated $6.2 million to defeat Prop 10. Clearly, anger at corporate greed can help overcome demoralization and fuel a continued determination to fight for affordable housing. However, important questions about strategy and tactics must be answered for this momentum to be turned into future victories. Answers to these questions can only be revealed through a serious analysis of the strengths and weaknesses of the Prop 10 campaign.

While the Housing Now coalition did excellent work mobilizing grassroots activists and ordinary people to campaign for Prop 10, they also make a critical mistake in allowing the Democratic Party to play a leading role in determining the campaign’s strategy and messaging. While the Democratic Party claims to support progressive ideals like affordable housing for all, in reality they serve the interests of their corporate funders, including developers and landlord lobbies, by arguing to water down demands to what is acceptable to big business.

Prop 10 was endorsed by multiple state and local elected Democrats as well as the California Democratic Party. However most endorsements came late in the campaign with a calculated awareness as to how favorably rent control was already polling (66% support). In exchange for this lukewarm support, Democratic strategists were allowed to focus the strategy narrowly on middle-class white women as the key demographic instead of appealing on a wider, working-class basis to the entire working class. Had the campaign started its ground game much earlier and with a firmer, more focused approach to turning out working-class voters, the outcome might have looked different.

Another crucial weakness of the Prop 10 campaign was centered around the legislation and messaging itself. Despite the fact that rent control polls so highly, the designers of Prop 10 based their initiative on a negative demand to repeal a complex housing law without including a positive rent control demand. Additionally, the words “rent control” themselves were conspicuously missing in most “Yes on 10” messaging. As a result, the powerful and well-funded opposition had plenty of space in which to create confusion, and did so effectively. Even if it had passed, the landlord lobbies and developers would still have had the chance to defeat subsequent struggles to actually enact rent control.

In terms of funding, the Prop 10 campaign was outspent almost 4-to-1 and would have been dwarfed even more if not for the $21 million donated by billionaire philanthropist Michael Weinstein. Having a statewide grassroots organization with a coordinated fundraising apparatus in place would have been immensely beneficial and could have made the difference between success and failure. However, the Democratic Party is scared of losing its grasp on the reins of power, thereby being of use to their elite supporters. Empowering working-class families to feel real ownership over the campaign would have resulted in greater pressure for bolder demands and overt anti-corporate messaging.

History shows that the Democratic Party reliably defends the rights of landlords to make massive profits off of struggling tenants and the rights of real estate developers to wield their capital to displace working families by the thousands. The defeat of Prop 10 follows multiple attempts in recent history to repeal the rent control ban through the state legislature. The last legislative attempt failed to get out of committee in the state assembly in January 2018 and occurred while the Democratic Party held a super majority in the state legislature and governorship!

Democrats will now cynically use the defeat of Prop 10 as justification to not support any kind of rent control moving forward. Instead, they offer either woefully insufficient plans or problematic schemes based on a “market-friendly” approach to the housing crisis. Take for instance the tepid plan by Los Angeles Mayor Eric Garcetti to build 222 new housing units in his “A Bridge Home” plan (to address an estimated 31,516 homeless living in the city).  In a more appropriate estimation of the state’s housing need, Governor-elect Gavin Newsom pledges to build 3.5 million housing units in the state by 2025. However, these plans are currently and will likely continue to be funded by taxes on working people. They will also be constructed through public-private partnerships that provide subsidies and partial to full ownership of properties that were built with public funds to the very real estate developers who opposed Prop 10.  Furthermore, what our government calls “affordable” housing is not affordable for working-class Californians. Without bold measures, unrestricted rent increases throughout the state will continue to fuel the tide of displacement ravaging working-class neighborhoods.

Let us be absolutely clear: private developers and their advocates in office will not solve the housing crisis. As long as housing is a private commodity, working-class families will be at the mercy of a chaotic and merciless market whose only aim is to maximize profit, not meet human need. Rent control and taxing the rich to build affordable housing are important demands that can significantly improve the lives of millions and start to shift the balance of power away from private developers and back toward ordinary people. However, they are still ultimately concessions that won’t change the nature of the private housing market. Ultimately, the only way to provide safe and sustainable housing to all is through democratic control of our housing supply. And yet the Democrats are light years away from even offering basic concessions to workers who are currently being displaced by the hundreds of thousands.

With the victory of Prop C in San Francisco, a measure that will levy a 0.5% tax on the city’s top grossing companies  amounting to $300 million annually to be alloted to homeless and housing programs, an important precedent has been set that housing activists should look towards as they consider their next steps. The affordable housing movement could organize on the basis of a series of city by city Prop C-style campaigns that would tax the rich to fund the construction of permanently affordable, publicly-owned housing. This movement could coordinate on shared strategy and tactics. This could provide the basis for an organization that could provide a serious fundraising apparatus for a new party, removing any temptation to rely on billionaires like Weinstein and Marc Benioff (the Salesforce CEO who supported Prop C). With that in mind, the Prop C-style campaigns could also be linked up into a statewide structure that provides the outline for building an independent left party in California.

Such a movement could adopt the banner, The California We Need, similar to one used recently by a progressive coalition in Vancouver, Canada to successfully elect an independent progressive to city council. While a workers’ party does not yet exist, socialists could run under this banner in city and county elections up and down the state on strong working class programs.

The affordable housing movement is at a crossroads. We cannot now de-mobilize and return to the tepid ways of lobbying the very Democrats that helped create a California in crisis. Prop C provides an example that other cities can follow. Democratically coordinating affordable housing struggles between cities across the state could provide the bones of a statewide movement and the outline for a future independent workers’ party. We must fight for an unapologetic socialist program to tax the rich to build The California We Need, to build a socialist alternative!