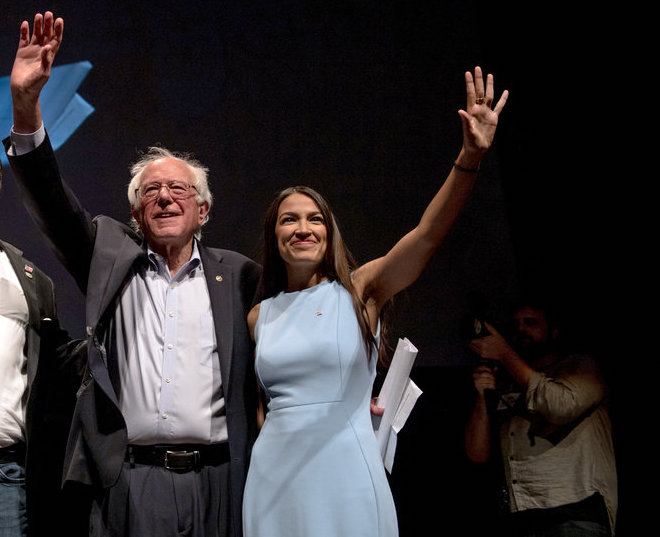 Alexandria Ocasio-Cortez’s congressional primary victory in July has brightened the spotlight on democratic socialism. Ocasio-Cortez, a member of the Democratic Socialists of America (DSA), defeated Joe Crowley, one of the leaders of the establishment Democrats in the House, with an astonishing 57.5% of the primary vote. Her immense popularity nationally and her affiliation with DSA has also boosted interest in democratic socialism.

Ocasio-Cortez’ appeal to a broad section of ordinary people in both New York City and across the country is driven by her campaign’s commitment to bold demands – similar to those raised by Bernie Sanders in 2016 – including Medicare for All, abolishing ICE, free college education, and affordable housing.

Winning these demands would be a huge step forward for working people but this will require electing fearless representatives who take no corporate money and are the voice of a mass movement in the streets. One of the first breakthroughs in the current shift to the left in major urban areas was in Seattle where the election of Socialist Alternative member Kshama Sawant to the city council paved the way for the victory of the grassroots 15 Now campaign, and the first citywide $15 minimum wage in the country.

Both Ocasio-Cortez’s victory and the tremendous growth of a broader mood of protest in society demonstrate the rising potential for the development of mass movements. According to a Washington Post poll, 1-in-5 Americans have attended a protest or political rally since 2016. Millions have flooded into the streets for the women’s marches, recent demonstrations against Trump’s anti-immigrant policies, the youth movement against gun violence, and in support of the teachers strikes in a series of states earlier this year.

Our Vision of Democratic Socialism

Ocasio-Cortez correctly points toward the incredible wealth in our society which should provide for people’s basic needs, including health care, food, and housing. A democratic socialist society would provide free college education, universal health care, and affordable housing to serve the needs of the vast majority of people.

But a socialist society would go further and take decisive measures to eliminate poverty, war, racial segregation, and structural sexism; and it would rebuild our infrastructure on the basis of renewable energy. In order to achieve all this, working people would need complete control of the levers of power in society, enabling us to democratically build a better world for all. Instead of big business reigning over all of politics and the economy, we need to bring the banks and big corporations into public ownership.

In several interviews, Ocasio-Cortez pointed to social democratic countries like Norway and Sweden as a model. However, many of the social reforms won in these countries, such as universal healthcare, have been continually chipped away. Worldwide, corporate interests seek to turn profit on health care by privatizing public health systems. The reality is that capitalism continued to dominate these societies even under the welfare state. Under capitalism all gains are temporary and can be reversed.

What it Will Take to Win

To mobilize forces strong enough to shake the foundations of this rotten system, we need to build a political force representing the interests of working people independent of corporate interests combined with a sustained mass movement in the workplaces, campuses and on the streets. In the 1960s and 1970s, explosive social movements won significant victories during the reactionary Nixon regime, including the right to abortion, civil rights protections, and an end to the Vietnam War.

The failure of the left to bring to bring these struggles together and to give them a clear political expression in a new mass party factored into the eventual dying down of these movements and their inability to bring a more decisive challenge to the establishment and capitalism itself. Many of the victories won in this era, including the right to abortion, have been steadily eroded since then.

With the fightback developing today, the same potential exists for our struggles to be linked and channeled into the formation of new mass organizations. We recognize that Ocasio Cortez’ victory has strengthened the desire to use the Democratic Party as a vehicle to develop a socialist challenge. But the further this challenge develops, the more it will come up against the barriers of corporate control in the party. The key thing right now is to mobilize the widest possible forces to fight for Ocasio Cortez’ platform. The struggle will only intensify when she and other self-described democratic socialists take office this fall.

The power to win a better world for all lies in the hands of the millions of working people and young people who have already begun moving into action and have the power to put an end to this oppressive, exploitative system once and for all.