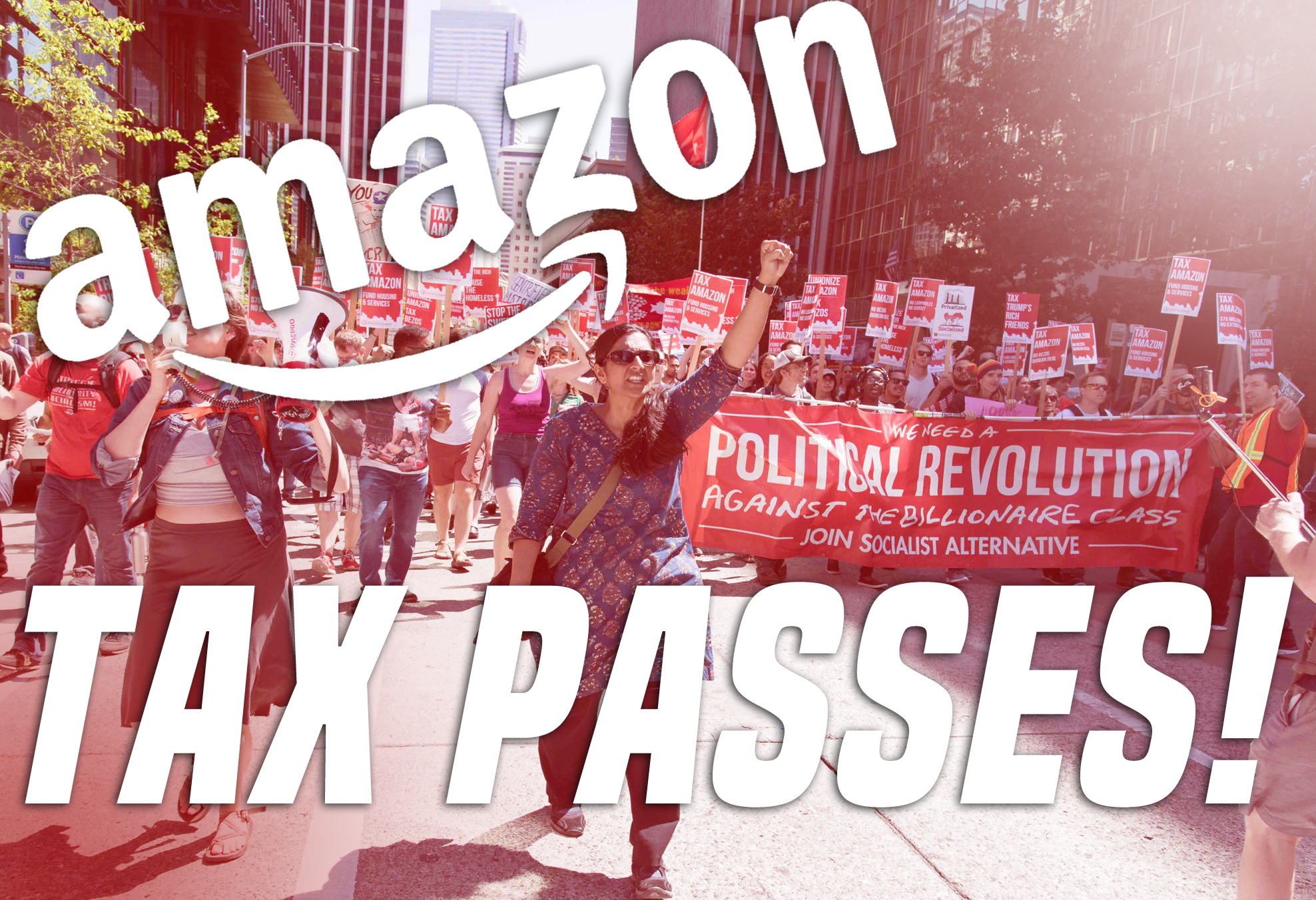 On May 14, the Seattle City Council passed a historic tax on Amazon and other big corporations to fund permanently affordable, publicly owned housing. The driving force behind this victory was the strength of our #TaxAmazon movement. Under the leadership of Socialist Alternative, Democratic Socialists of America and Councilmember Kshama Sawant, our movement put this issue on the table last fall when we occupied City Hall overnight and brought our fight into the November City Council budget hearings.

In the week before the final vote, big business and their purchased politicians like Mayor Jenny Durkan furiously worked to water down the legislation and fill it with corporate loopholes. Mayor Durkan put forward a counter proposal that cut the proposed $75 million tax nearly in half to $40 million a year with the majority going to temporary services – which will include inhumane homeless sweeps – rather than building permanently affordable housing. Due to the strength of our Tax Amazon movement, her proposal was voted down by the City Council finance committee. Over the weekend however, while the movement was in the streets fighting for $75 million with no corporate loopholes, the rest of the City Council was working out a deal with the Mayor and big business. While the deal they worked out is only marginally better than the Bezos-Durkan deal with $48 million in new revenue as opposed to the proposed $75 million, it is a $48 million per year transfer of wealth from the hands of big business to working people that would never have been won without the fight we mounted.

As with the $15 minimum wage, what we won was based on the strength of our movement, our ability to continue to mobilize broad public support, and our ability to politically defeat the arguments of big business. Amazon fought viciously against this tax in its entirety and we have now wrested tens of millions from Bezos’ hands to fund affordable housing.

Amazon’s Extortion and Capitalism’s Race to the Bottom

In the lead up to the final vote, Amazon sent an extortionary threat to Seattle workers. Amazon promised to halt construction in Seattle if this tax was passed, holding over 7,000 construction jobs hostage!

Let’s be crystal clear: it made no immediate financial sense for Amazon to halt construction on this project part-way through, and this tax doesn’t even come close to making a dent in the massive profits they make in Seattle. This was a shameful act of bullying by the billionaire class and a blatant attempt to divide Seattle workers. Amazon’s share of the full tax would have been pocket change to Jeff Bezos, the richest man on earth. This extortion was an attempt to maintain an iron grip over local political policy by flexing the muscles of their massive capital and weight in the Seattle economy. It was also a message aimed at intimidating workers in other cities around the country where Amazon has offices and fulfillment centers. As socialists, we are not naive about Amazon’s enormous power or the number of jobs it holds sway over, but we completely reject capitalism’s race to the bottom which seeks to pit housing against jobs, city against city, and worker against worker.

It is threats like this that graphically demonstrate the brutal race to the bottom inherent in the system of capitalism. Big corporations like Amazon are looking to cut costs at every turn, and workers always bear the brunt of these attacks. This is standard for a system that places profit and the wealth of a few over the needs of the vast majority of society. Jeff Bezos’ wealth sits on top of the shoulders of tens of thousands of Amazon employees, and it’s those employees who make the company run and create its wealth. We need a fundamentally different society — a socialist society — where rather than bending to corporate extortion, we take big corporations like Amazon into democratic public ownership and run them by workers instead. Trendsetting victories by socialists like a tax on Amazon or the passage of a $15 minimum wage are critical first steps, but our movements cannot stop there.

Capitalism is incapable of providing quality affordable housing for all, and to begin to address the housing crisis we need to fight for an alternative to the broken private housing market and for rent control. We need a massive expansion of tens of thousands of units of publicly-owned and operated social housing which is not susceptible to the whims of the market. Instead of the billionaire class and the real estate lobby holding sway over how much a person pays for housing, we could begin to provide an alternative for working people. We can also make sure all money generated though rents is invested straight back into maintaining and expanding publicly owned housing instead of being funneled upwards into profits. Finally, we can mandate that the housing be built with 100% union labor with priority hire given to local and minority-owned construction firms, ensuring the maximum benefit for Seattle workers.

We are Ready to Fight! Another World is Possible.

The victory our movement has won in Seattle has the potential to spread around the country. While it is not the full amount we demanded and far less than is needed, it was $48 million more than Amazon and other big corporations were willing to pay. It is also twice as much as establishment politicians on the City Council voted down last fall during the budget hearings. By building a determined, unapologetic movement we have won one of the most progressive big business taxes in the country in this period of brutal, bipartisan austerity. The importance of the leadership of Socialist Alternative and Kshama Sawant for the success of this movement cannot be overstated. By basing ourselves on the power of working people to disrupt business as usual, we forced the entire business and political establishment in Seattle to capitulate.

Now, we have to continue the fight. We cannot allow the city establishment and big business continue to run amok – denying ordinary people the right to safe and affordable housing. We need to fight not only for immediate gains in the present, but for an alternative to the bankrupt system of capitalism; For a future where nobody is allowed to die alone on the street, nobody is forced to choose between homelessness and an abusive partner, and nobody is forced out of the city where they work.

We are fighting for a city and a world based on solidarity, equality, and democracy – on the needs and aspirations of all working people and oppressed communities. We need to unite our struggles – to tax Amazon and big business, to fight for a $15 minimum wage, to strike for fully funded education, to end police brutality and the mass incarceration system – to fight for a different kind of society. We have a world to win.