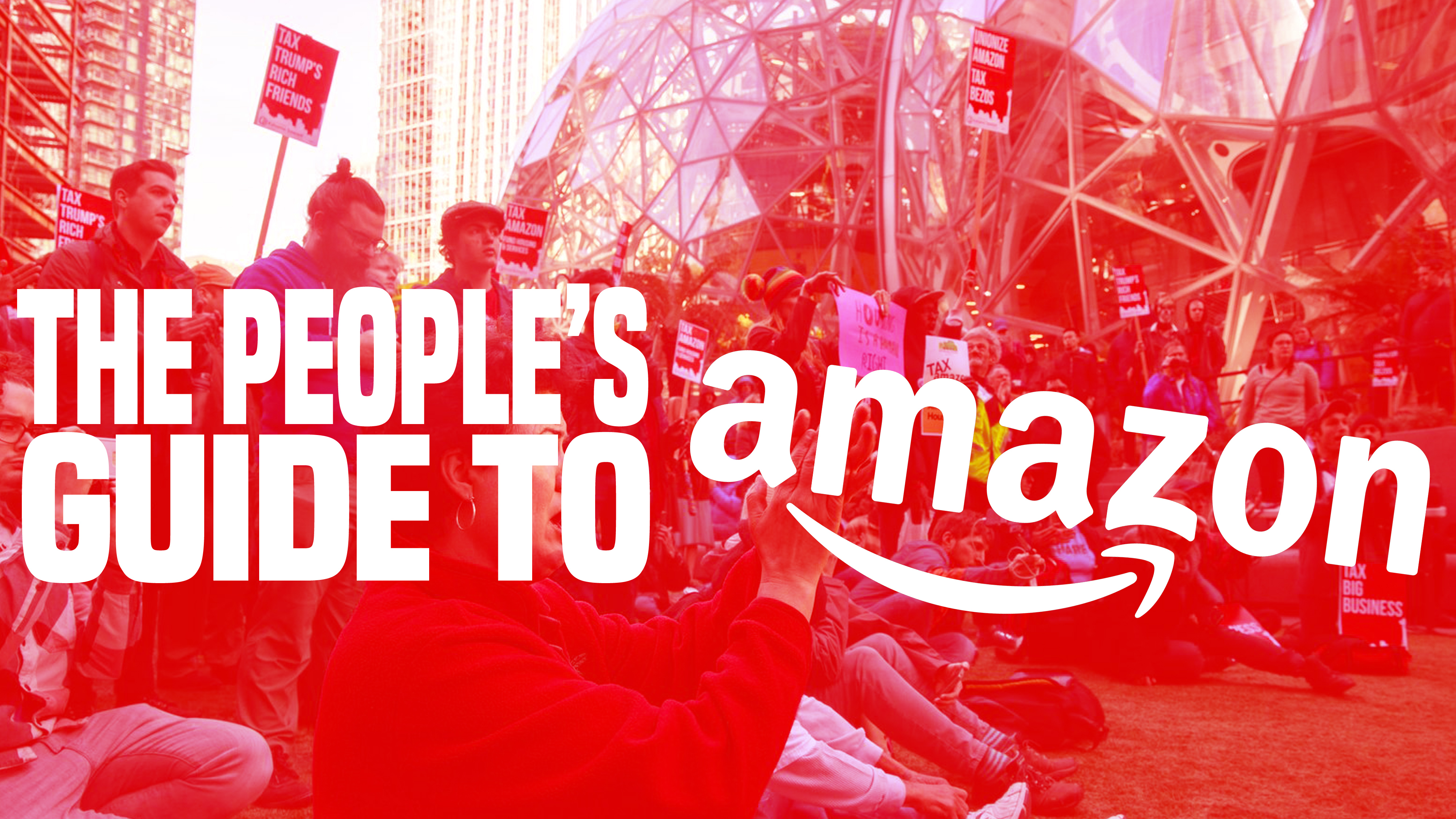 In the coming weeks, the City of Seattle could see one of the biggest transfers of wealth from the pockets of big business to working people since the $15 an hour minimum wage victory! Kshama Sawant, Socialist Alternative member and Seattle City Councilmember, alongside housing activists from across the city have been calling for a $150 million tax on the top 3% of businesses to fund affordable housing. After mounting a powerful grassroots campaign, this movement has forced the hand of the Seattle City Council to propose a $75 million tax, a critical first step in the movement! This tax should be a jumping off point for the movement as even $150 million is just the beginning of what’s needed. We need a massive expansion of publicly-owned, hiqh-quality social housing to address the severe housing and homelessness crisis – paid for by taxing big business.

Jeff Bezos makes more in one minute than an Amazon warehouse worker makes in a year!  Amazon’s immense growth and exploitative labor practices have gained growing national attention and Socialist Alternative has been at the forefront of reporting on this from a working class perspective, with strategies to fight back against corporate giants like Amazon and win. Below are Socialist Alternative articles exploring different aspects of Amazon’s empire.

The People’s Guide to Amazon

The hundreds of thousands of low wages worker toiling in inhuman conditions in his sprawling warehouses pay far more in taxes. Yet with Trump’s recent tax cut for the rich, Amazon will receive a $789 million tax break in 2018. Amazon is the second-highest valued corporation in the world, with assets valued at almost $1 trillion. Jeff Bezos, with wealth of $130 billion, is the richest person in the world.

Last June, Amazon bought Whole Foods for $13.7 billion in their latest attempt to expand their corporate reach. Whole Foods workers were immediately worried – already underpaid, they’d heard the stories of the brutal working conditions for the company’s warehouse workers and feared the same conditions would spread to their stores. Amazon warehouse workers face a pace of work so extreme that some end up in the emergency room. They face high processing targets, which if not met often result in firing.

Outing the brutal working conditions at Amazon is a key part of mobilizing public opinion on the side of the workers. But even more essential, and crucial to creating any lasting change, will be the workers themselves organizing. Undercover organizing inside the warehouses is essential. Socialist Alternative encourages workers to take up this important work of building core groups of workers in the warehouse that can then mushroom into the powerful unions of tomorrow.

The Madness of Capitalism: Retail Industry in Crisis

With the rise of technology, the invention of the internet, and an overall shift towards convenience, the retail industry as we know it is changing rapidly. Amazon, Jeff Bezos’ multi-billion dollar corporation, is becoming the Sears catalogue of the future. Workers are faced with uncertainty as big-box stores are replaced by websites and warehouses and jobs are lost. As wages remain stagnant and health-care costs continue to rise, this crisis leaves retail workers at the mercy of a backwards capitalist system where a few people own the majority of the wealth.

Amazon and UPS Are Spying on Drivers – Workers Should Fight Back

ABOUT US
Socialist Alternative is a national organization fighting in our workplaces, communities, and campuses against the exploitation and injustices people face every day. We are community activists fighting against budget cuts in public services; we are activists campaigning for a $15 an hour minimum wage and fighting, democratic unions; we are people of all colors speaking out against racism and attacks on immigrants, students organizing against tuition hikes and war, people of all genders fighting sexism and homophobia.
Contact us: info@socialistalternative.org
FOLLOW US
© Socialist Alternative 2020 | All rights reserved
212 Shares
Tweet
Share212