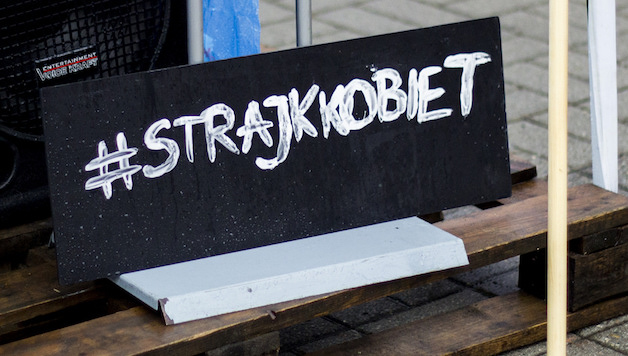 The threat of a bill banning abortion in cases of fetal malformation has been suddenly put into effect by the right-wing PiS (Law and Justice) dominated Sejm (parliament). This met with an angry demonstration of against the right and the actions of the Catholic hierarchy.

The bill restricting rights to abortion was carried awaiting further proceedings by parliament in January. However the exact date when the bill would be discussed again was not given. The parliamentary commission of justice and human rights did not put the abortion ban bill on its agenda for January to June. This all changed after the Episcopacy (Conference of Bishops) called on the government to speed up work banning abortion. MPs mobilized under the whip of the Catholic Church and on 19th March passed the bill in commission, after a parody of a debate. The next steps of rubber-stamping of the bill in the commission on social affairs and then a second vote in the parliament scheduled for 23rd March took place in under a week, which left very little time for the movement against abortion bans to mobilize.

Despite that, a national demonstration was called for in Warsaw for the day of the vote (which by the time of the demonstration was rescheduled to April). Thousands of people from Warsaw and many others from around Poland responded to the call and poured onto the streets. The most common estimate said that 55,000 marched in Warsaw that day – a figure higher than the original Women’s Strike” in 2016. This turnout shows the existing anger and the prospect of resistance, especially considering that the protest took place on a working day, with very short notice. While the national demonstration was the priority, thousands of people who were not able to join in the capital protested in other cities and towns. Notably 8-10 thousand demonstrated in Krakow, a few thousand marched in Katowice, Wrocław, Poznań, Łódź and Gdańsk. Small pickets took place in dozens of towns across Poland.

As the demonstration in Warsaw marched from the Sejm to the ruling party’s headquarters, slogans were chanted against the ban, against interference of the Catholic Church, for choice and for decent healthcare for women. More radical anti-government slogans could also be heard.

Role of the right

The current government is openly anti-women and reactionary. However, ideas criminalizing or totally banning abortion are not predominant in Polish society; not even the electoral base of the ruling party supports the ban. After the movement of 2016, PiS started treading more carefully on the issue, even trying to create an impression that they were open for discussion about liberalization. However, the real face of the government was shown once reaction’s most powerful pressure group – the Catholic Church – spoke on the issue. PiS quickly stepped back in line. This raised big anger: how could an unelected body of old men (the Episcopacy) have more weight to decide women’s reproductive rights than women themselves? That is why in many places demonstrations would target local curiae (administrations) of the Catholic Church.

Faced with these demonstrations, the ruling party initially tried to discredit the protests, claiming that they were “merely a picket”. State TV went as far as presenting the protests as “feminists demanding the right to kill children”. As the protests unfolded, some PiS politicians started to soften their position. One PiS MEP gave an impression in an interview that PiS would not confront head on the “abortion compromise” but would rather let the Constitutional Court decide. Since this body is basically also controlled by PiS, its decision could go either way.

The authors of the bill are a group of Christian fundamentalists operating under a number of labels – most notably the Ordo Iuris society, a ‘legal culture’ organization. According to a journalistic investigation, this group is financed by a Brazilian sect “Tradition, Family and Property”; the Catholic Church in Brazil officially disaffiliated from this group as it was involved in financial scams and historically in anti-left campaigns in Latin America, such as fighting against land reform or Liberation Theology. The leader of the ‘Stop abortion’ initiative Kaja Godek, was given a lucrative job on the board of directors of a state-owned engine factory after PiS won the election in 2015.

The turnout and massive quick response to the attack shows the underlying anger and energy of resistance against reaction. For now, work on the bill is postponed to April and, given the record of this government, an attempt to accept the bill overnight to surprise the movement is as likely as drawing it out in time to tire the movement.

The leaders of the ‘Women’s Strike’ announced that if the bill passes in the lower chamber of parliament, they will protest to the Senate and organize a massive movement, this time locally. Alternatywa Socjalistyczna says that it is important to build the movement to give the masses hope of a successful struggle. Repeating the same method of demonstrating at every new attack without any preparation or building in between can discourage and exhaust the participants. The mass movement should try and develop a democratic structure – like action committees based in schools, workplaces and communities – that could discuss and take decisions on next steps, allowing more space for more direct action, civil disobedience, etc. We also think that women’s struggle for choice is a class issue that should be taken up with the trade unions, that could help turn the largely symbolic ‘Women’s Strike’ into actual strike action.

Stopping the current attack will not solve the issues facing Poland’s women reproductive rights, especially those of working class women and students. No matter the outcome of this battle, the fundamentalist pressure group will come back with other attacks – like a full ban on abortion, restricting contraception, etc. Underlying problems like restrictive abortion laws (a so-called compromise), an unreliable healthcare system, the lack of sexual education, and insufficient childcare infrastructure remain to be fought for, under a socialist programme of full reproductive rights and proper public services.

Transphobia and the Left: Bogus Science and Bogus Marxism

ABOUT US
Socialist Alternative is a national organization fighting in our workplaces, communities, and campuses against the exploitation and injustices people face every day. We are community activists fighting against budget cuts in public services; we are activists campaigning for a $15 an hour minimum wage and fighting, democratic unions; we are people of all colors speaking out against racism and attacks on immigrants, students organizing against tuition hikes and war, women and men fighting sexism and homophobia.
Contact us: info@socialistalternative.org
FOLLOW US
© Socialist Alternative 2019 | All rights reserved
13 Shares
Tweet
Share13