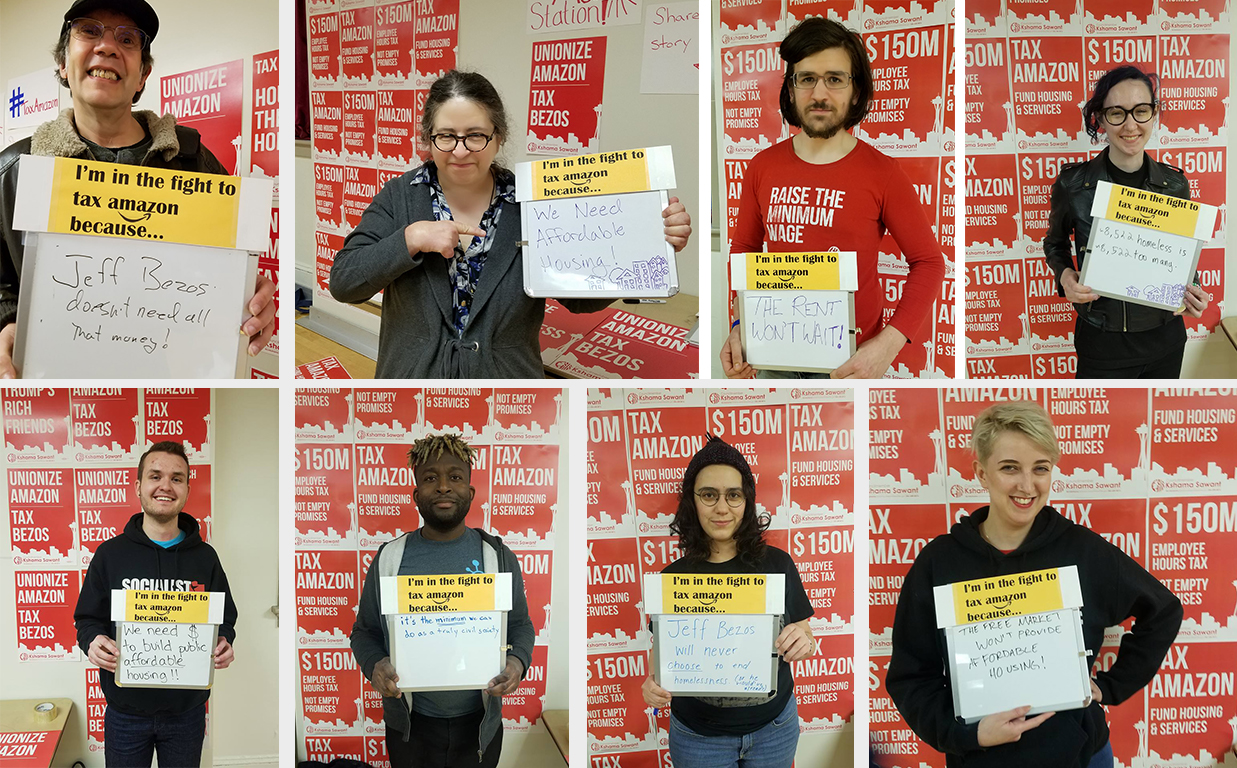 Over two hundred seats are filled with excited and angry community members on a Tuesday night. Along the back wall are tables set up by the Transit Riders Union, Socialist Alternative, and the Democratic Socialists of America. Many of the people present are from established groups in Seattle, while others are coming to their first organizing meeting. The speaker list includes activists who have become leaders in the affordable housing movement in the past year, and still others who have been involved for decades.

There are speakers from Union local UAW 4121, the Seattle NAACP, the Housing for All Coalition, a UW laundry truck driver, Real Change, WHEEL, Women in Black, Democratic Socialists of America, Socialist Alternative, and a local small business owner. The overwhelming message of these speakers is a simple one, “we need money to build housing, and the big businesses of this town are the ones who have it.” The unity of message and the audience’s support of the message are striking.
These groups have come together to support the creation of an Employee Hours Tax (EHT). This tax would collect 5 cents per each worker hour, or around $100 per employee per year. Such a tax would only apply to companies that gross over five million a year- a category that excludes all but the top 5-10% biggest corporations.  The tax is perhaps best understood through the activist’s rallying cry “Tax Amazon.” Amazon has been given massive tax breaks, most recently by Trump’s new pro-big-business tax plan, and last year paid no federal taxes at all. Simultaneously, Jeff Bezos has quietly become the wealthiest man in the world, with a net worth of $124 billion. This Employee Hours Tax would be  a step towards making huge companies such as Amazon pay their fair share to support the city in which they make their massive profits.

The historically black Central District provided the setting for this Tax Amazon town hall. Decades ago this was a thriving black neighborhood, where black home ownership rates were high. Gerald Hankerson, president of the local NAACP, explained that since the ‘60s these demographics have been changing, and today only 20% of the area is black. Rising rents and property taxes have forced residents to move further away from their jobs and established communities to far-flung areas where the housing crisis is less severe. We have seen that such displacement has exacerbated Seattle’s ballooning homelessness crisis, responsible for 133 deaths in 2017. Launching the public fight for the Employee Hours Tax in this neighborhood sends a powerful message to the city establishment that the residents of this city are taking the fight back against displacement and gentrification into our own hands.

This initiative has not come forward without with conflict and contention. The predictable response by some economists has been that any tax on big business will result in a loss of jobs and/or wages for Seattle workers.  However, we know to take these warnings with more than a grain of salt. We still have not seen the massive job losses predicted by these same economists since we won the $15 minimum wage 4 years ago. And in reality, the EHT would create hundreds of new living-wage union jobs in the construction and administration of new housing .

The phony arguments against the EHT do not stop here though. There has also been a move by the business-led Progressive Revenue Task Force to whip up public opposition by including small businesses in the tax through a provision called “skin in the game.” The audience at the Town Hall was unanimous in rejecting this proposal and reinforcing that this should not be a tax on small businesses, who already face an uneven playing field of regressive taxation, but only on the biggest businesses in the city.

Breaking out into workshops after the speakers were finished, we discussed how to concretely move forward from this town hall. Commonly repeated was the need to build our power through active community engagement and organization. We cannot rely on deals made behind closed doors or appeals to the better nature of our elected officials. Instead we must depend on our own strength, which lies in our numbers and our ability to disrupt business as usual to force those in office to respond to our needs..

This town hall is part of a powerful new chapter in Seattle’s struggle for racial and economic justice that has already seen an explosion of new left organizations and political formations. Passing the $150 million EHT to tax Amazon would propel this “new left” into a very powerful position leading up to municipal elections in 2019.

When we fight, We win!