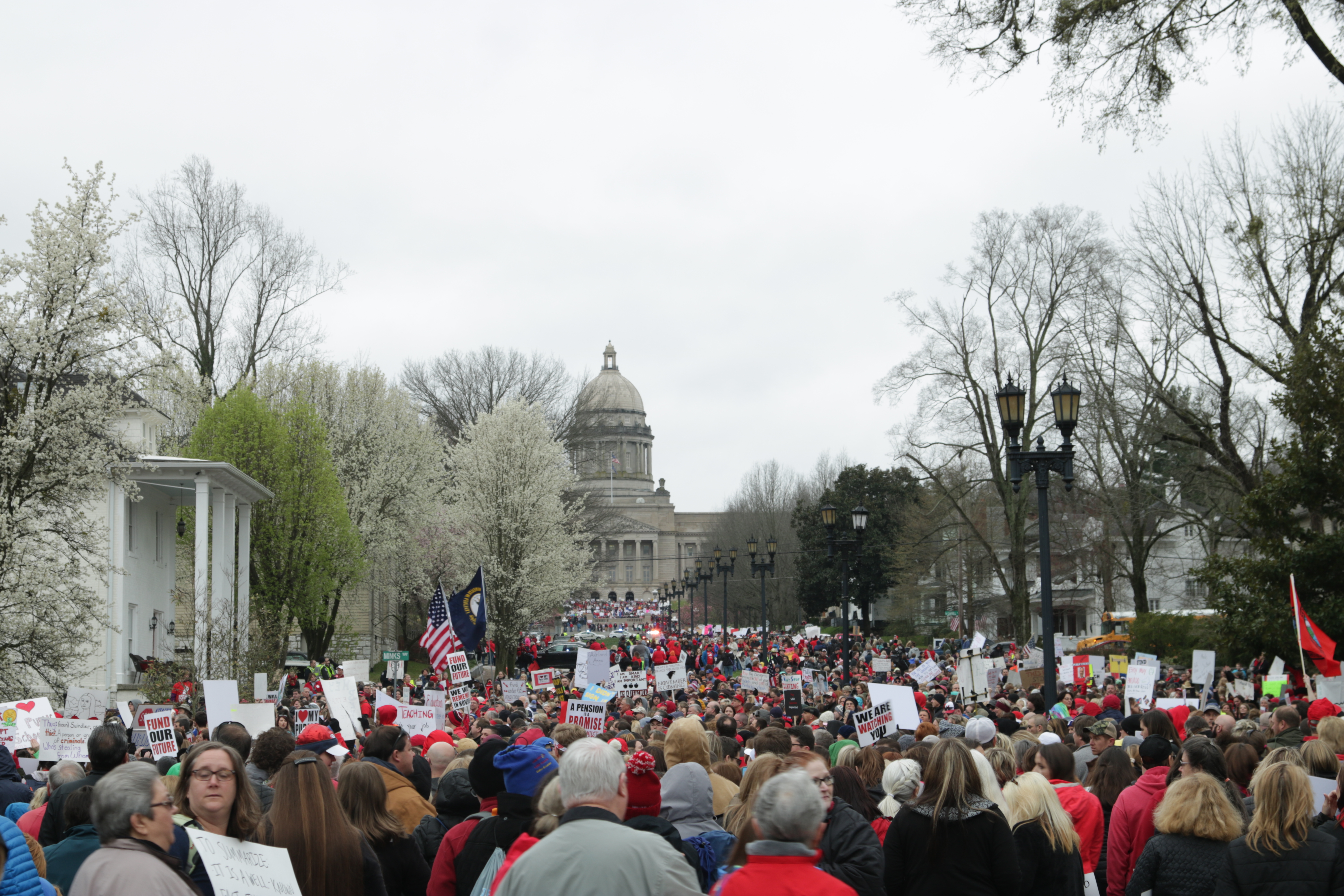 Thousands of teachers and students flooded the Kentucky State Capital on Monday, April 2, to oppose vicious Republican-backed cuts to pension programs and the threat of cuts to education funding. The majority of counties were on spring break, but every one of those that weren’t on break closed in observance of the action. The march in Frankfort, along with statewide teachers strikes in Oklahoma and West Virginia, show that there is a rising trend of resistance to attacks on education, especially in “red” states. Today’s action in Frankfort follows a wave of sickouts led by the rank-and-file of Kentucky in the hours following the rushed passing of pension cuts through the state legislature. These cuts were attached to a bill originally dealing with sewage water treatment and subject to virtually no public input. The governor only needs to sign to make the pension cuts official, but as West Virginia teachers showed last month, a determined grassroots struggle that advocates for all working people and places strike action as a central tactic can push back even the most determined attacks by right-wing lawmakers.

Early Monday morning, teachers converged on Frankfort, many driven by the same bus drivers that take students to school every day. The majority gathered outside the Kentucky Education Association headquarters several blocks away from the capitol building while a smaller contingent went ahead to the state house to chant at legislators as they made their way in for the session. The crowd numbered in the thousands, comprised of mostly teachers but including an inspirational mobilization of other public employees, private sector labor unions, and students.

For students on the ground in Kentucky, fighting to protect their teachers is an obvious choice. They see very clearly how attacks on teacher pensions and public education will hurt their schools and are just as eager as their teachers to move into struggle. As a firefighter in attendance with their union put it, “An attack on them is an attack on us. Public sector workers, yeah, and all [workers].”

Kentucky’s current budget “crisis” is a result of chronic underfunding and tax breaks for the super rich. The most optimistic claim from the bill’s author state it could save $300 million, a tiny fraction of the $41 BILLION budget shortfall. According to the Institute for Taxation and Economic Policy, working-class Kentuckians pay 11% taxes, while the wealthiest 1% of Kentuckians pay only 6%! In addition, tax breaks to the super rich and corporations totaled over $13 billion, far more than any short term gains from cutting pensions.

Already Kentucky’s Democrat Attorney General, Andy Beshear, has threatened to take legal action to block the pension cuts from being implemented. This would be a positive step forward, but it would be a mistake to stop the grassroots organizing while waiting on the courts to save public employees’ pensions. Teachers and students should trust their own power over the courts. In West Virginia, the Attorney General threatened teachers during their “illegal” strike on constitutional grounds, only to back down in the face of a determined movement. Nationally, “Right to Work” for public sector unions will likely go forward this month through similar “constitutional” arguments in the Janus case being heard by the Supreme Court. When it comes to class politics, sometimes the best legal defense is a determined movement.

The pension cuts are linked to a “comprehensive tax reform” plan – sales tax increases for working people and income tax cuts for millionaires and corporations, which will be coming out as soon as next week. As one Kentucky lawmaker remarked “we’re open for business.”

The sheer size and scope of the attacks over the last years offer the potential to link up the fight against pension cuts to the broader needs of working-class people. Whereas the Republicans pit pensions against school funding to divide the movement, the movement can be made twice as powerful by linking the struggles together. Teachers and other public employees should reject all attacks on working class people and demand as a starting point taxing the rich and corporations to cover the deficit. On this basis, blocking the immediate threat to pensions and budget cuts can be a first step towards pushing back against the right-wing agenda generally, which in reality has been pushed at various times by both the Republicans and Democrats.

Already the wider community recognizes that they have a stake in this fight. Grassroots initiatives have been launched to ensure working-class students still get lunches while strike continues, and they are crowdsourcing for the strike fund. In Kentucky, which has its own long traditions of labor struggles, these efforts show the power behind the old slogan “an injury to one is an injury to all.”

Rank and File Leaders Step Up

Like West Virginia, the backbone of the organizing in both Kentucky and Oklahoma have been relatively informal networks where rank and file teachers are discussing strategy and next steps. These networks can play a crucial role bringing the struggle forward, and linking it to broader engagement with the wider community, who face similar attacks from the same GOP regime.

While Monday’s protest was formally hosted by the Kentucky Educators Association (KEA), it was called a few hours after teachers had already organized spontaneous “sickouts” that in some cases shut down entire districts. Furthermore, the KEA has no immediate plans to escalate the struggle beyond Monday’s impressive protest, but it’s clear people are ready to keep fighting back. The long term strategy being put forward by the KEA leadership is to vote out the Republicans in November, however stopping at that would be a fatal mistake. Similar to the West Virginia teachers, the rank and file leaders that are emerging in these struggles are demonstrating a willingness to go much further than the union leadership.

Socialist Alternative is following this struggle closely and has members on the ground. The rally today shows the support that exists for teachers who have been under continuous attack from the right-wing government in Kentucky. We fully support the teachers’ struggle and appeal to all working people to support and follow it closely. As details of the new state budget are released, we will carry updates on the situation. Workers everywhere should learn from this – to win, the struggle needs to grow, build community support, and take decisive action.