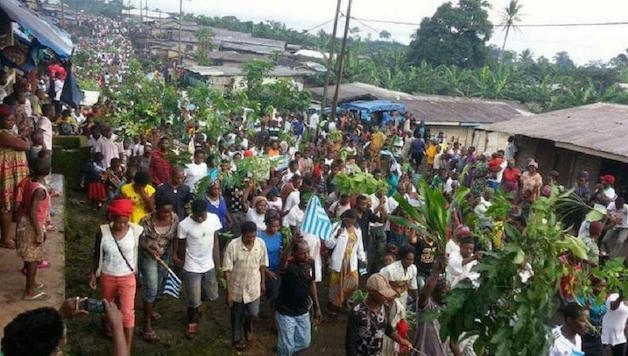 Ten years ago the economic crisis broke loose. The lives of many young people and working people were turned upside down. In order to maintain the profits of the economic elite, a bolder neoliberal policy was adopted. Even where there is now a certain economic recovery again, this only benefits the same small minority of super-rich. Inequalities are increasing, as is the anger against the capitalist establishment and all established institutions. Young people and workers continue to fight, but need an alternative to move forward.

Where there is discrimination – marginalization of population groups on the basis of nationality, ethnicity, religion, language or other – the anger against the anti-social policy comes on top of the aversion to discrimination. This discontent manifests itself in different degrees, but cannot be ignored. In this context the call for autonomy, or even independence, is seen by a growing layer of the population as an answer to the daily problems. Repression against this by the central governments only reinforces this feeling. The most recent example of this is that of Catalonia in the Spanish state. But there are many others. The enhanced return of the national question and of centrifugal tendencies is a process that has its origins in the contradictions of the capitalist system.

The Belgian CWI section has been for some time already in discussion with a group of Marxists originally coming from Cameroon. As internationalists, we are of course in solidarity with refugees coming to our country. But we do not limit ourselves to that: we also contribute to discussions about and movements around the situation in their countries of origin. Our Swedish sister organization is also in contact with expatriate Cameroonians and regularly analyzes the situation in Cameroon with suggestions of answers and alternatives, of course in consultation with Cameroon activists who are also involved in movements in Sweden. In order to achieve change, we must fight together on an international level. With the analysis below, we want to sharpen our knowledge and perspectives on Cameroon, in particular with regard to the struggle of the English-speaking population in that country.

For several months, the English-speaking population of Cameroon has been fighting for more investment in the region and respect. The government, under the leadership of President Paul Biya, proceeds to brutal repression.

Since the end of 2016 there have been major actions by workers and the poor in the two English-speaking regions in the west of Cameroon. In recent weeks, the deadly repression has been stepped up by the Cameroonian state. This has led to a strengthening of separatist feelings. The English speakers account for about 20% of the population. They are underrepresented in institutions such as education, where there is discrimination based on language. Since the attachment of the former Southern Cameroons to Cameroon in 1961, and certainly since the abolition of federalism in 1972, those English speakers feel like second-class citizens.

As in several other African countries, the IMF is putting pressure on Cameroon to limit public spending. President Paul Biya has been in power since 1982 and imposes the neoliberal policies that are being asked for by the European imperialist powers. That has never stopped him from enriching himself, his family and friends. Decades of austerity and lack of investment have led to shortages across the country, especially in regions that the authorities say are less important, such as the far north, where factions of Boko Haram factions are responsible for terror.

The lack of investment, one of the central features of Biya’s policy, leads to demands concerning infrastructure (hospitals, roads, etc.) in the movement among English speakers. There is poverty and the lack of investment in the country while there is at the same time a real plunder of natural resources by the government. For example, oil is extracted in the Gulf of Guinea, off the coast of the English-speaking Southwest region. The movement for more autonomy and separation from the English-speaking regions cannot be seen in isolation from the struggle against the lack of investment and the austerity policies of the government.

The authorities, including elements of the English-speaking elite around Prime Minister Philemon Yang, have from the outset tried to silence the movement in the English-speaking regions. This was done with long-term interruptions of the internet, the introduction of a curfew, the closure of radio stations, the ban on gatherings of more than four people. Demonstrations are being dealt with repressively and there are raids in the villages where houses are sometimes set on fire.

Tensions rose towards the end of last summer. On October 1, the leaders of the secessionist movement came together to symbolically declare the independence of the Republic of Ambazon. It is difficult to get accurate reports of the situation. It is certain that the repression has already led to hundreds of deaths and an outflow of at least 40,000 refugees to neighboring Nigeria.

The lack of answers to the socio-economic demands together with the arrogance and repression of the regime mean that more and more English speakers are in favor of independence. This is reinforced by the indifference of opposition parties and leaders from French-speaking Cameroon and the refusal of the left to recognize democratic national rights.

The absence of an alternative and of political perspectives, leave room for Paul Biya and his friends to use communal divisions in an attempt to isolate the ‘English-language problem’. If there are no other arguments left, only the options of repression and division remain. Biya needs that: he wants to be elected for the seventh consecutive time in the presidential elections due at the end of 2018.

For the right to self-determination

The only option for the workers and the poor in Cameroon is to resolutely oppose any form of oppression and discrimination. After all, these are only aimed at defending the interests of the ruling elite.

During and after the 1917 Russian revolution, in order to avoid the danger that the Bolsheviks would be seen as a continuation of the Great-Russian domination under another form, Lenin guaranteed the right to self-determination, including the right to independence, to the many minority populations in the old Tsarist empire. That was the only way to ensure a genuine unity between the workers and the poor of the oppressed communities and the workers and the poor in the rest of the old empire.

In Cameroon, the left must also position itself as “genuine and consistent democrats” that strengthen the unity of workers and the poor in all regions of the country.

Some attempts to organize the movement have led to more coordination, with a good follow-up of calls for strike days in the English-speaking regions. But these successes do not take away the general lack of organization and perspectives for the movement. This lack pushes several small separatist groups in the direction of violence. In recent weeks several agents and soldiers were killed.

It is crucial that the movement succeeds in organizing the struggle, for example by setting up instruments that express the anger. There are recent examples that demonstrate the potential in terms of organization and coordination of the struggle. For example, there were regular general meetings that allowed a wider involvement with the ‘Balai Citoyen‘ in Burkina Faso, ‘Y’en a marre‘ in Senegal, ‘Lucha‘ (Lutte pour le Changement, struggle for change) in Congo (DRC) or ‘Togo Debout‘.

Inspiration can be derived from these movements, but they were often characterized by an absence, or lack, of willpower to challenge the existing power and to turn into a political instrument with a program of far-reaching society change. That also explains why the old regime in Burkina Faso could recover, despite an exemplary struggle of the population.

Building class unity with the French speakers in Cameroon

The struggle of the English-speaking population of Cameroon must seek support among the most militant layers of the French-speaking working class in the country. To this end, the leadership of the movement must defend guarantees of the rights of minorities in case of secession and must build the movement on the basis of common opposition to the despotism of the clan around Biya and against poverty as a result of capitalist exploitation.

Broaden the struggle and break with the system

It is important to understand that the independence of the former Southern Cameroonians under a capitalist system of exploitation will not solve the existing problems. Capitalism is unable to resolve the national question. That is why the workers and poor cannot count on the English-speaking elite. After all, it will not allow the struggle to focus on the only real way out: a break with capitalism and the building of a socialist society that is democratically managed by and for the workers and the poor.

The courageous struggle of the English-speaking population of Cameroon would soon become an example that is followed by populations in the rest of the country and in Nigeria. This could then be a lever to come to a voluntary confederation of socialist states in the Gulf of Guinea and the region, as a step towards a world without poverty, neoliberal austerity, shortages, corruption, division and sectarian violence. Such a change in society is necessary so that people can take the future into their own hands.

Democratic Republic of the Congo: Anniversary of Independence

ABOUT US
Socialist Alternative is a national organization fighting in our workplaces, communities, and campuses against the exploitation and injustices people face every day. We are community activists fighting against budget cuts in public services; we are activists campaigning for a $15 an hour minimum wage and fighting, democratic unions; we are people of all colors speaking out against racism and attacks on immigrants, students organizing against tuition hikes and war, women and men fighting sexism and homophobia.
Contact us: info@socialistalternative.org
FOLLOW US
© Socialist Alternative 2019 | All rights reserved
12 Shares
Tweet
Share12