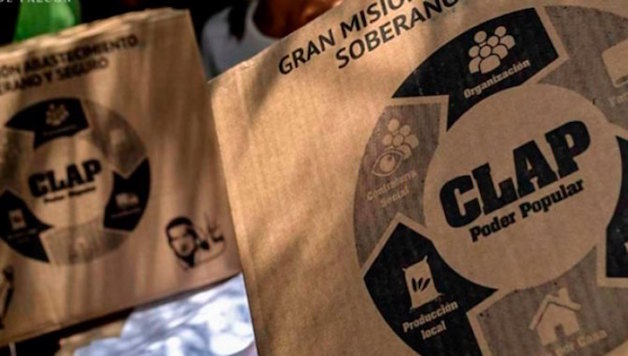 All political and economic power to the workers and the people!

Since the victory of the government in the last two elections, temporarily holding political dominance in the National Constituent Assembly over the right – which had decided to seize power through violence – many came to think that the government will finally address the problems faced by the people. The terrible economic crisis makes it impossible to live on the limited amount of money a worker sees, demonstrating that economically the defeat of the bourgeoisie has not been achieved. Estimated inflation at the close of 2017 exceeded four digits. According to unofficial figures it was 2,616%. For the month of December alone it was 85%, with a basket of basic goods costing 5,594,119.75 Bolívars (Bs), when the minimum wage is Bs 248,510 and food vouchers are worth Bs 549,000.

In this context many people in need have put their hopes in the purchase of products sold by the government through the ‘Claps’ (Comités Locales de Abastecimiento y Producción – Local Catering and Production Committees), where the average price is Bs 25,000. When the Claps were launched it was hoped they would be organs of popular power, elected and recallable by the people, submitted to the control of assemblies, and serving to guarantee a real struggle against food shortages. But the government conceived of them from the beginning as a purely assistive, client-based measure, which allowed it to increase its control, and has done everything possible to impede real participation by the people. The result of this bureaucratic conception is that the Claps see ever more problems in distribution, inefficiency and even corruption. This led some parts of the country to protest, sharpening the contradictions on several occasions.

This situation has been aggravated by the unfulfilled announcement of the government in the month of December, promising ham at Christmas, which did not meet expectations due to corruption, internal and external sabotage, and the evident conflict within the bureaucracy over personal interests. The promised products arrived in very small quantities, generating social conflict, even sudden looting of shops, warehouses and freights in various regions, receiving an immediate answer in the repressive measures of the state and even big business owners, who hired vigilante groups for their protection. Although this did not turn into the generalised looting of the 1989 “caracazo” riots in Caracas, it shows the limits of the situation have been reached. This situation, which is still ongoing at the start of the year, has become even more fierce, with cattle robbed and butchered on the spot, allowing the bourgeoisie the perfect excuse to hoard and to sharpen speculation, creating more shortages.

The only alternative which the bureaucracy found was to intervene in the supermarkets, lowering the prices of products to values before 15 December (already inflated by speculation). Another measure was depositing money through national ID cards. Both are attempts to lower the pressure in the streets. This crisis situation is pushing some sections of the population to emigrate from the country – according to unofficial figures, three million citizens have left Venezuela in recent years.

Meanwhile, the government and the right-wing opposition are sitting at the negotiating table in the Dominican Republic, supposedly searching for a way out of the political, economic and social crisis. But the reality is that what those negotiations and the capitalist measures the government is applying demonstrate is that both the Venezuelan government and the leaders of the ruling United Socialist Party of Venezuela (PSUV), in spite of all their rhetoric about socialism and the legacy of Chávez, have no intention of applying measures which improve the living conditions of the people – who are in confrontation with the bourgeoisie. They are ready to accept, in practice, all the measures demanded by Venezuelan and foreign business which, of course, the leaders of the MUD (Table of Democratic Unity – right-wing opposition coalition) have always defended. The meetings in the Dominican Republic are in no way about solving the basic problems of those most in need, but intend to create a new pact of governance, like the Puntofijo Pact between the social-democratic ‘Acción Democrática’ and the conservative ‘Copei’ after the fall of the Pérez Jiménez dictatorship, which led to the establishment of the fourth republic.

The class most impacted by the capitalist politics applied by the government, seeking this accord with the bourgeoisie, has been the working class. Their wages have been devalued, even in sectors where there have always been privileges, such as the workers of PDVSA, the state oil and gas firm. In recent days the oil workers have been protesting – just like in the Caracas Metro, the state electricity company Corpoelec, and the basic businesses of Venezuela’s Guayana region, among others, where some have been sacked for their demands and others are resigning en masse. This situation is affecting public services, even including oil production, where frozen drills and oil pump systems are reported.

The government has decided to take the path of managing capitalism, without changing the relations of production, and submitting to the capitalist market, resorting to more and more desperate methods – like the concept of the “petro” (a cryptocurrency created by the Venezuelan state) in the search to secure foreign currency exchange to allow continued importing. But this only deepens the dangerous, speculative game, reinforcing schemes for an oil-rentier economy, direct indebtedness to multinationals and simulated privatisation of the oil industry. Although they try to present the petro and other similar measures as an attempt at not directly giving into the IMF or Shanghai Cooperation Organisation, the reality is these measures mean surrendering to and even more speculative and corrupt capitalism and the result can only be an even worse crisis.

What to do in this complicated situation where different perspectives can be presented? The only alternative which can address the economic collapse which Venezuela is living through is a revolution based on Marxist ideas. But as we have explained, the government and the bureaucracy is going in the opposite direction.

For a united front of the critical left of ‘Chavismo’ with a genuinely socialist, anticapitalist and anti-bureaucratic programme

Though they still make official declarations talking about socialism and even Marxism, celebrating the anniversary of the Russian Revolution and demagogically referring to Lenin and Trotsky, Maduro and the rest of the government leaders have no intention of basing themselves on the power of the working class to expropriate the rich and democratically plan the economy as Lenin and Trotsky did in Russia to defeat the economic sabotage, exploitation and misery of capitalism. Quite the contrary. Those who defend workers power and breaking with capitalism and bureaucracy to establish a genuine revolutionary state based on workers’ democracy, are today persecuted and attacked by PSUV leaders. On the other hand, those who give speeches about socialism, the legacy of Chavez, and even workers’ control but who then apply capitalist policies and attack workers, are those who prosper, end up running state companies and making deals with the capitalists at the expense of the people.

The result of these policies, if the working class does not manage to put itself at the front of the revolution getting rid of the bureaucrats and capitalists, can only be the defeat of the revolution, either at the hands of a MUD government backed by US imperialism or by the bureaucracy itself which is trying to consolidate a capitalist regime under their control and that of Russian and Chinese imperialism.

In a historical period of organic crisis of world capitalism, either one of these developments is only possible on the basis of an unprecedented attack on the rights and living standards of the working class. We cannot even rule out a “failed state” and foreign intervention. Or the imposition of a Bonapartist government by sections of the military or far right.

To avoid these scenarios of definitive victory of the counter revolution we have to be clear that all solutions require the building of a state where the power and control is with the workers and oppressed people. To achieve this, it is indispensable to develop a policy of class independence, gathering together the critical sectors of Chavismo and all anti-capitalist fighters around a real anti-capitalist, socialist anti-bureaucratic programme.

It is necessary to unite the genuinely revolutionary Left organisations to face this situation. This was shown by the victory of the comrades in the Simon Planas municipality in the local elections in Lara state, despite the bureaucratic obstacles. This unity must have as its goal the taking of power to destroy the current state controlled by capitalists and bureaucrats, which creates bigger and bigger inequality between rich and poor, and which remains a capitalist state. We must build a revolutionary state under the direct control of the workers and people in its place.

All economic and political power to the workers and people!

We must demand that the power passes from the hands of the Ministers, governors and mayors to the hands of councils formed by the people themselves and the working class, so that all public representatives on a local, regional and national level, should be elected and subjected to recall at any time, and under the permanent control of workers and popular assemblies. No public figure should earn more than a skilled workers’ wage and all possible tasks should be rotated to avoid bureaucracy and corruption.

The control and direct administration of the means of production by the working class is vital to end both capitalist sabotage and the corruption of the bourgeoisie and the bureaucracy. As long as the big companies are not expropriated, the sabotage of production will continue. Intervening sporadically in isolated supermarkets does not address the root of the problem. The companies must be under the control of the workers and communities.

State control of foreign trade is also essential. We cannot keep handing over dollars to looters.

We cannot continue allowing real wages to diminish, while surplus value for bosses continues to increase for the capitalists despite their criticism of the government.

We should build a united front of workers against sackings in the public and private sectors, organising big marches and mobilisations. Workers cannot continue to be sacked for struggling for their most basic rights like food and healthcare.

We should confront the intentions of imperialist countries to intervene and invade Venezuela with the excuse of promoting “peace” and stability. Part of the problem in Venezuela is the financial blockade and submission to the world capitalist market. At the same time we should also fight against the exploitation and attacks on workers’ rights by Chinese and Russian capitalist companies, or through “mixed” companies together with the bureaucracy. Our only allies are the peoples and working classes of the world. The Chinese, Russian, Iranian and other bourgeoisies have their own capitalist interests which have nothing in common with our interests.