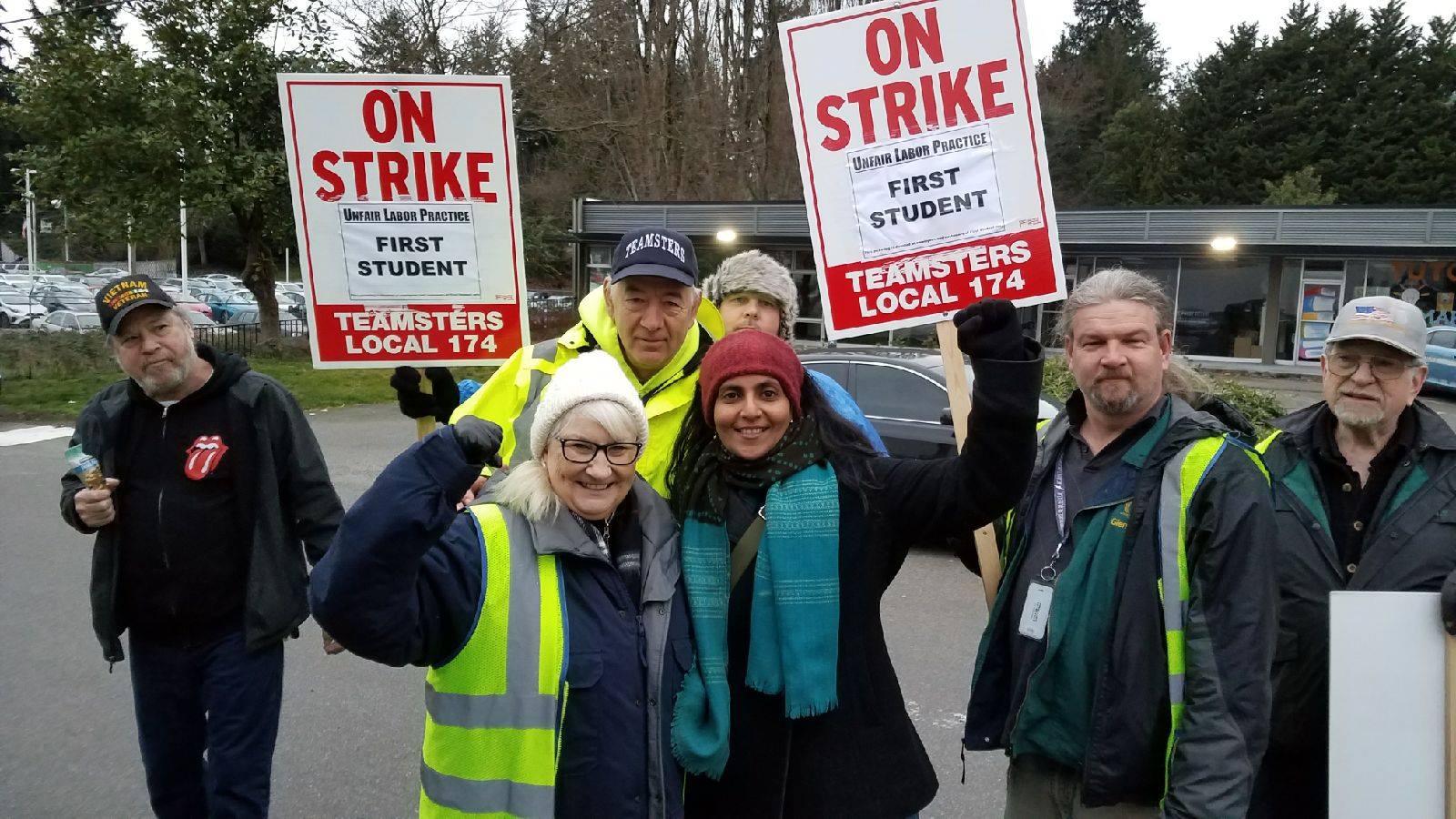 As a Seattle City Councilmember representing thousands of children, working parents, and school employees, I am increasingly concerned by your continued failure to support the 400 school bus drivers who are on strike, while First Student refuses to provide them with decent healthcare and retirement. Seattle families depend on the bus drivers to safely transport students to and from school each day. Over the past few days I have visited drivers on their picket lines to support their struggle, and will continue to do so as long as they are on strike.

First Student is notorious for attempting to maximize their profits by exploiting drivers. The Seattle Times reported on February 4 that First Student has provoked a series of strikes in the last year, in Steilacoom in Pierce County; Southern California; and Montreal, Canada. All across North America, school bus drivers will look to the example set by the courageous union members of Teamsters 174 for inspiration on how to fight back against First Student’s ongoing attacks on workers. We have a duty to fully support these workers, not only because they deserve healthcare, but also to set a powerful fighting precedent for school bus drivers across the continent.

As I mentioned in my October 16 letter to you, the School District finds itself in this situation because of your own decision to contract out school bus service to a low-bidder, private, for-profit company, whose ultimate responsibility is to maximize profits for its executives and major shareholders. You have a responsibility both to ensure these workers receive the healthcare they deserve, and to bring bus service back in-house as quickly as possible.

Contracting public services to private corporations has been part of disastrous neoliberal strategies to drive down the wages and working conditions of the workers who deliver those essential services. This is not just something that happens in the school districts. For example, workers who deliver homeless and mental health services at Seattle’s nonprofits are also scandalously underpaid.

In this case, public officials have been quite explicit about using outsourcing to drive down workers’ wages and conditions, as I saw in the December 16, 2016 memo from Dr. Nyland to the School Board which stated:

“Unfortunately, the pass through cost for the District to broaden First Student’s bus driver participation in healthcare coverage is cost prohibitive, especially when the District is facing a $74 million dollar shortfall. Expanding bus driver health care coverage would increase this contract by $1.7 million annually and not recommended.”

Healthcare coverage for school bus drivers is no more “cost prohibitive” than it is for Seattle Public School’s executives, but I notice that you do not apply that same logic to your own healthcare coverage. There is no doubt that the state legislature has been severely underfunding our public schools. But if instead of cutting basic benefits for school bus drivers, you had fought establishment politicians in Olympia to adequately fund education, I would have supported you in that.

Yesterday on the picket lines, many bus drivers asked whether Seattle Public Schools is fining First Student for forcing workers to strike for a fair contract, as The Seattle Times reported that you promised you would do last October, and as your contract with First Student allows. On behalf of the bus drivers, my office contacted School Board President Leslie Harris. I appreciated her engaging with my office on this important issue. Ms. Harris suggested that Mr. Noel Treat, the School District’s General Counsel, might be able to answer some of our questions: Has the District started fining First Student $1.2 million per day as you suggested last October? If you have not, when do you intend to do so? Also, did you fine First Student for the one day strike on November 29 last year? Drivers, parents, students, and the labor movement deserve to know whether you will hold First Student accountable.

There is no such thing as neutrality when workers go on strike for their basic needs. If you hold First Student accountable to the terms of their contract and fine them for provoking this strike, they will be much more apt to bargain with the Teamsters in good faith. If on the other hand, you give First Student a free pass for their unfair labor practices while continuing to pay them almost $30 million per year for services they are not delivering, then you will effectively be siding with this negligent multinational corporation against its underpaid workers.

Thank you for your time and consideration.