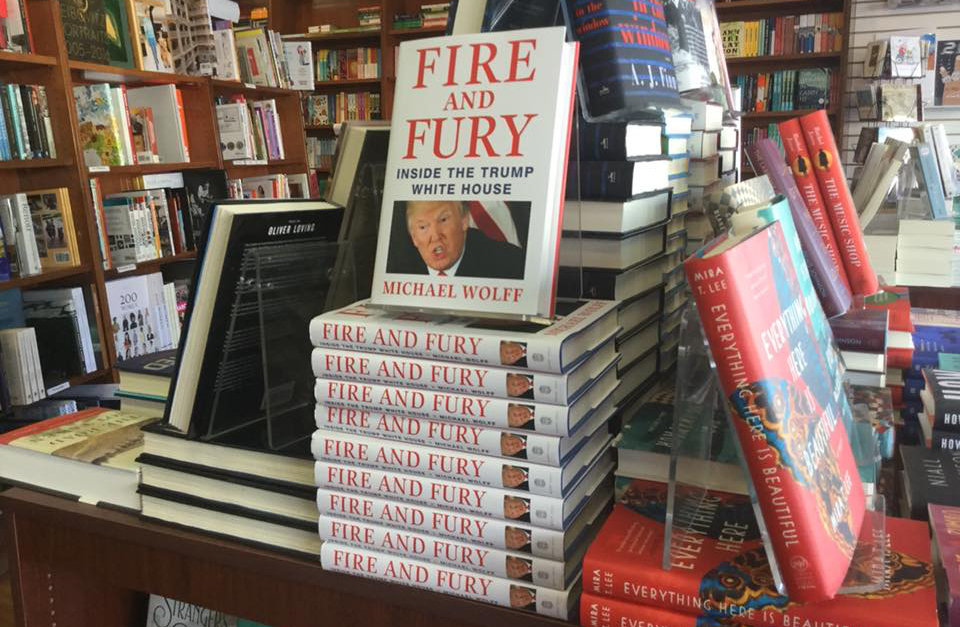 The publication of Fire and Fury: Inside the Trump White House by Michael Wolff shook up the political terrain before the book was even released. Trump is no stranger to bizarre tweets, but his twitter pronouncements on the eve of the book’s publication were beyond surreal, pronouncing himself first “like, really smart” and then correcting himself minutes later by typing he was “not smart but genius…and a very stable genius at that!” It is astonishing that days after presenting himself as mentally fit and a “genius,” Trump let fly with his tirade about Haiti, El Salvador and African nations being “shitholes.”

Steve Bannon, the vicious racist and nationalist former “chief strategist” of the Trump campaign and administration, has been abandoned by his billionaire backers due to revelations in Fire and Fury, forcing him to resign from leadership at Breitbart News. This isolation of Bannon comes as his ambitious preparations this year for a national campaign of alt-right candidates in the Republican primaries had already been dealt a severe blow by the defeat of predator Roy Moore in the Alabama special election. Bannon had declared his intention to unseat high-profile mainstream Republicans, including Senate Majority Leader Mitch McConnell, but McConnell looks safe, at least for now.

Now that Fire and Fury has been published, it will be read widely and likely reach “best-seller” status, fueled by a liberal and left audience that wants to see Trump and his agenda defeated. However, while Trump’s support has weakened for a number of reasons including the allegations of sexual assault against him re-emerging, the book will not likely have an impact on Trump’s “hardcore base.” Many of them feel encouraged by Trump’s “outsider” and populist approach with a smaller section of Trump’s supporters being emboldened by his normalization of racist and sexist actions. The other factor preventing Trump’s support from collapsing is the apparent strength of the economy at the moment which is actually heading in the next period for another 2007-8 type crash.

Fire and Fury is a genuine page-turner, telling a story of warring factions, chaos, shifting power dynamics, and conflicting personalities that is gripping and it would be more entertaining if it wasn’t a horrific real-life look at some of the most powerful people in the world. While author Michael Wolff has a chequered journalistic history, it is clear that he was given unprecedented – and nearly unlimited – access to the White House, and even Wolff’s enemies have pointed out that he has documentation of all the key quotes from Trump administration members attributed in the book.

However, Wolff’s portrayal of Trump as a bumbling, moronic, and petulant child is disputed by other Washington insiders, including anti-Trump conservative David Brooks. In exposing Trump, Wolff’s book implicitly glorifies the “normal” politics of both parties that laid the basis for the right-wing populist echo of the Trump campaign. Also, the portrayal of an inept, unraveling administration having its wings clipped by billionaires, military generals, and politicians could lead some to underestimate the dangers of the Trump administration and what will be necessary to defeat its policies.

The book confirms many things already widely believed: Trump is a non-stop sexist harasser with a short attention span and fragile ego that nobody can fully control. His campaign was a vanity project and his advisers didn’t expect anything like the level of success it achieved. Many suspected that the Trump campaign was shocked at their victory on election night and that they weren’t prepared to win. More than this, Fire and Fury confirms that they didn’t even want to win.

An unprepared transition following a disorganized campaign led to an unprecedented level of chaos in the initial days of the Trump administration. As Bannon authored right-wing executive orders that provoked mass protests, National Security Adviser Michael Flynn was forced out of his position due to lies about his connections with Russia. With mainstream Republican leader Reince Priebus brought in as Chief of Staff, a three-way faction fight between Bannon, Priebus, and Trump’s family (nicknamed “Jarvanka” in the book) dominated the administration for months.

The constant media leaks, conflicting political messages, and sharp shifts in policy coming from the White House reflected the balance of power between these three factions and Trump’s own shifting allegiances. Many suspected this, but it is confirmed in exhaustive detail with direct quote after direct quote from key players in Wolff’s book.

Wolff also deals at length with the approach of the Trump administration to accusations of collusion with Russia. Fire and Fury suggests that Trump’s campaign didn’t conduct ongoing collusion with the Russian government despite one incredibly stupid meeting organized by Donald Jr. that “resulted in nothing.”

The paranoia, squabbling, and unprofessional approach of the Trump administration has given the liberal establishment a longer “lease on life” for the Russia scandal than would have been initially warranted. These actions have opened the door to obstruction of justice charges surrounding the ill-conceived attempts to avoid and end the investigation, especially the firing of FBI director James Comey. Special counsel Robert Mueller appears to be vigorously pursuing this line of inquiry.

The Russia investigation has also opened the door to examining Trump and Kushner’s financial dealing with various Russian oligarchs including allegations of money-laundering. In fact, newly released testimony in front of Congressional committees by Glenn Simpson, founder of Global GPS, lays out the extent of Trump’s financial ties with Russian oligarchs and mobsters in some detail. Simpson investigated Trump on behalf of the Clinton campaign which might make him suspect but his account is backed up by a lot of evidence. It is not clear if Mueller is pursuing this avenue but if he does, it could be explosive.

Steve Bannon is being interviewed by Mueller, and Fire and Fury indicates that Bannon likely had no meetings with Russian officials at all. The lack of evidence of ongoing cooperation with Russian officials during the campaign is one reason why we can’t depend on denunciations of a Russia connection or an investigation into it to defeat Trump. But there are tens of millions who want Trump gone now! We need to mobilize for demands to improve our lives with protests in the streets and organizing in our campuses, workplaces, and communities to defeat this reactionary administration. We demand that Trump, who lost the popular vote, be impeached for his sexual assaults against women, his relentless promotion of racism and xenophobia, and his brazen attempts to use the presidency for his and his family’s personal gain.

Many of the key figures in Fire and Fury no longer reside in the West Wing: Bannon, Flynn, Priebus, Rex Tillerson, Sean Spicer, Anthony “Mooch” Scaramucci, and Katie Walsh are all gone. Does this reflect a fundamental shift back to “normalcy?” Are our fears and anger about right-wing populism now misplaced?

Wolff paints a glowing picture of former Deputy Chief of Staff and Republican insider Katie Walsh, reflecting an undercurrent of the political messaging throughout the entire book. Amidst pages of praise for Walsh’s approach in the White House, Wolff writes, “politics is supposed to be … a business supported by, tended to, and, indeed, ennobled by a professional political class.”

This “professional political class” is made up of corporate lobbyists, military brass, and politicians paid off by billionaires. Their policies have directly contributed to growing income inequality including the bailout of the big banks, cuts to social programs, and the privatization of education. They uphold institutional racism and sexism and have waged war after war for corporate profits and the“prestige” of the U.S. empire. It is precisely the actions of this professional political class that laid the basis for the echo that both Trump’s campaign and Bernie Sanders’ call for a “political revolution against the billionaire class” got in the 2016 elections.

The implicit glorification of “politics as usual” in Wolff’s book would lead us to believe that billionaires and political insiders can fix the mess in Washington. This analysis fails to understand the dynamics of a global capitalist system in crisis and decay. It also lacks the urgency that we need now to stop racist deportations, end sexual harassment in the workplace, and reverse the economic policies that fundamentally benefit only the super-wealthy.

Right and left populism have grown internationally since the capitalist crisis of 2007-8. This political polarization will continue to develop and the right-wing will be strengthened if the left puts its faith in a “professional political class” with plummeting authority.

Rather than aggressively attempting to remove Trump now, cynical Democratic leaders want to use the disgust with Trump simply for electoral gain. Their active opposition to mobilizing people in the streets or any use of the social of the working class enables the Republicans to push through policies that damage the lives of working people like the recent tax bill. If the Democrats finally move to impeach Trump, it will be coupled with an attempt to return the corporate “politics as usual” that will inevitably deeply disappoint people, opening the door to more right-wing populists in the future.

Instead of Democrats who refuse to fight for Trump’s removal and don’t boldly do everything they can to block his policies, we need strong independent left campaigns in 2018 as a step towards a new party of working people. We need a political force that refuses corporate donations and audaciously fights for a “political revolution” with demands for quality health care, affordable housing, and education for all while fighting against all the right-wing attacks.

Upon reading the “inside dope” on the Trump White House, millions will be horrified at the scenes painted in the book. Some will feel hopeless to do anything about it; others will be motivated to protest; some may think the backlash against Bannon has gotten things “under control;” still others will hope that establishment figures in Trump’s cabinet can “fix” the situation by using evidence in the book to invoke Article 25 of the Constitution to remove the President.

The revelations in Fire and Fury won’t lead directly to Trump’s downfall without further political crisis and mass pressure from below. We should remember that Ronald Reagan occupied the West Wing for years while suffering from Alzheimer’s and that the Democrats refused to fight against George W. Bush’s robbery of the 2000 elections. Capitalist investment craves stability and the political establishment serves the will of the ruling-class billionaires.

We cannot be complacent or wait for the midterm elections to strike a blow at Trump and the Republicans. The January 20 protests will bring out anger not only against sexism but against the entire Trump agenda. This is an opportunity to reignite the movement in the streets.

Socialists need strong contingents on these demonstrations to energetically talk to people about the type of working-class program that can mobilize working people, split Trump’s base, and defeat right-wing populism once and for all. We should build a movement to impeach Trump and connect this to demands that can improve people’s lives in the here and now.

This decaying system creates monsters like Trump through its constant racism, sexism, and increasing economic inequality. A socialist program for democratic workers control of the commanding heights of the economy, an independent left party, and vibrant social movements are necessary to stop this onslaught.

The “professional political class” will only move against Trump as a last resort to prevent an even deeper crisis or mass upheaval. Even with Bannon gone, racist ideologue Stephen Miller is still influential in the West Wing. One year is enough!  We won’t get complacent or return to the “business as usual” of capitalist crisis and destruction without a fight. The working class needs to bring “fire and fury” against the billionaires and politicians that created this mess as well as the racist, sexist capitalist system that they represent.