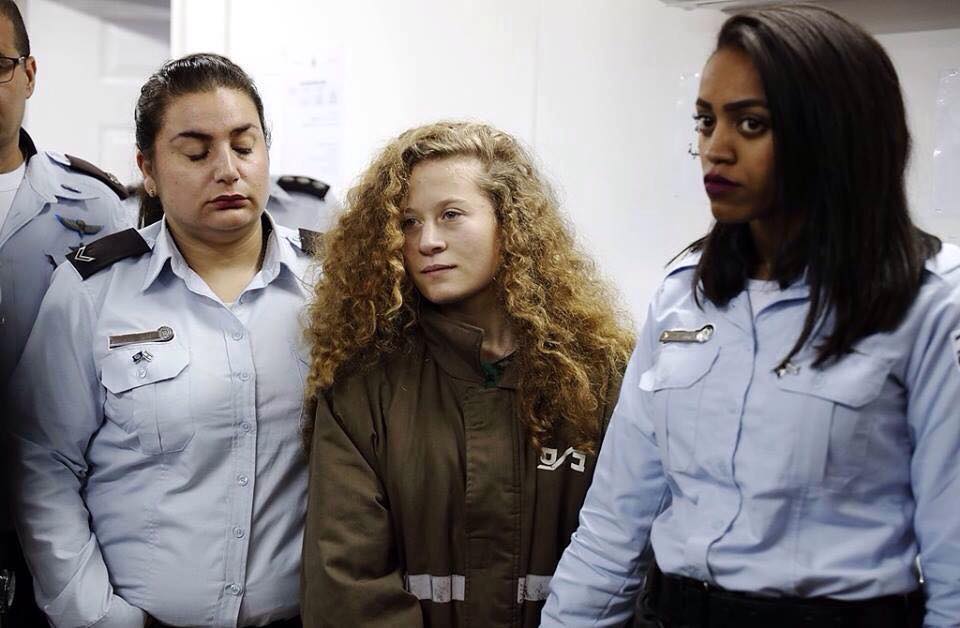 The Israeli government and army’s decision to punish the women of the Tamimi family has awaken in response a wave of international solidarity and support. Here we publish a statement from Socialist Struggle, the Palestine/Israel section of the Committee for a Workers International. Demands at the end are from the Socialist Party’s (Ireland) article.

Sixteen year-old Ahed Tamimi and her twenty-one year-old cousin, Nur Tamimi, were arrested during a military raid on their house in the west bank village of Nabi Saleh three weeks ago on the night of December 19, 2017. Ahed’s mother, Neriman Tamimi, was arrested when she went into the police station to find out what happened to her daughter. The family’s laptops and phones were confiscated by the army.

All of this was a result of video footage documenting the two young women facing two armed soldiers, with full body armor, and trying to remove the soldiers from their home. Minutes earlier, Ahed’s relative, fifteen year-old Muhammad Tamimi, was critically wounded after he was shot in his head with a rubber plated metal bullet.

It is clear from the clip that the soldiers were not hurt or threatened at any point. They held on to their weapons, but left without arresting the women or attacking them. The publication of the incident caused an uproar in the right. From the fascist far right of Benzi Gupstein and “The Shadow” (a rapper-turned-vocal-proponent of the far right on social media), to Security Minister Lieberman, and Education Minister Bennet, who demanded the arrest of the girl who dared to kick a soldier out of her home in the occupied territories.

The highly covered arrests that were documented and distributed by the IDF spokesperson seem like a vindictive act, meant to show that the soldiers retreating from protests of unarmed residents was nothing more than a tactical move, and to deter young Palestinian men and women from fighting against the occupation, especially in lieu of the protests following Trump’s declaration [regarding Jerusalem and the location of the U.S. embassy to Israel].

The military advocate general is accusing Ahed of five counts of “assault” against security forces and incitement. Her mother is accused of filming two instances and of “incitement” on social media. Nur was also officially accused of assault of a soldier.

Meanwhile, the women of the Tamimi family are held in the “Ofer” military prison, notorious for the use of questionable methods to break prisoners, such as isolation and sleep deprivation [editors note: Nur has since been released after 16 days]. They will stand trial in a court martial, a court with almost 100% conviction rate. Since the original incident for which they were arrested is not enough, even by the distorted standards of the military court system, to justify their continued detention, the military advocate office repeatedly demands to extend their arrest in order to add more offenses that allegedly happened in the past to their indictment, and to excuse the prolonged arrest. In these conditions, not only do they not have any chance of a fair trial, but there is a real danger they will remain in prison for years.

It is almost redundant to mention that Jewish settlers who have been documented assaulting Palestinians, Israeli left activists, or even police officers and soldiers, not only do not face a military court, but almost always don’t face any court at all for their actions.

The discussion in the mainstream Israeli media was mostly focused on the question of whether the officer should have immediately reacted using force toward the Tamimis, or rather show restraint in front of the camera. The picture that was drawn was of a soldier innocently standing by, while two young girls are trying to confront him and cause him to react violently in front of the camera. But when looking at the facts it is clear the story is the other way around: the army provocatively entered the village to push the residents into a reaction which they will use to justify heavier oppression.

Several op-eds went further and portrayed sixteen years old Ahed as a provocateur or a skilled actress who intentionally creates situations which will make IDF soldiers “look bad” in front of cameras. As if the Tamimi family invited armed soldiers to invade their home just so they will look bad! And, as if there’s a girl anywhere in the world who chose to be born and live under the foreign occupation by a foreign army! Since Trump’s declaration, at least 610 Palestinians were arrested by the Israeli army, over 170 of them are children and teenagers. Did all of them “orchestrate” their arrest just to make soldiers look bad?

Most media outlets in Israel ignored the main issue: What was the reason the soldiers entered Nabi Saleh in the first place? Only a handful of journalists mentioned the popular protests in the village – the protests that the soldiers were there to suppress – that were held against the occupation and the theft of the village well by the adjacent settlement of Halamish.

The local water source lies on private Palestinian land and is used by the Palestinian farmers of Nabi Saleh. The settlers are claiming it and preventing the Palestinian farmers from working their land. The Israeli army is there to protect the theft of the spring by the settlers and to prevent residents from protesting against the injustice caused to them. Most of the time, quelling the demonstrations is done by use of brutal and often deadly force against unarmed civilians. In recent years, two demonstrators were murdered – Mustafa and Rushdi Tamimi.

At the day of the filmed incident where Ahed and her cousin confront the soldiers, the army did not stop at suppressing the demonstrations by the spring, but invaded the village in order to make it clear to the residents that protesting will not be worthwhile. During the attempt to suppress the demonstrations protesting the army’s invasion of the village, Muhammad Tamimi was shot in his head. The essence of the army’s presence there is therefore to protect the settlers overtaking of the well that is used by the people around, and to enforce the oppressive order of the occupation, where Jewish settlers have a license to steal, while Palestinians are stripped of their right to even protest.

Solidarity and the Future of the Struggle

Ironically, the brutal and arbitrary arrests of the Tamimi women sparked the reactions of solidarity that the government and army feared when the video went viral. Workers and young people all over the world are following the arrest of Tamimi and demonstrations demanding her release have been held in multiple countries.

This reaction reveals the limitations of power of the occupation regime when facing the civilian population and can definitely push more young people to rise up against it. “Ahed is a representative of a new generation of our people, of young freedom fighters… They must become the life line which will revive our revolution,” writes Ahed Tamimi’s father in a public letter to his arrested daughter.

The arrests of the Tamimi daughters are meant to put a “price tag” on the resistance to military regime in the occupied territories. Netanyahu’s government of settlements and big capital is arrogantly trying to break the resistance to the occupation using deadly oppression, and is trying to “manage the conflict” at the expense of the future of Palestinian workers and youth, but also at the expense of Israelis. There needs to be arrests for the government’s attacks, not of young Palestinian girls rising up against them. A fight to remove the army and the settlements from the occupied territories is a fight for peace.

The Socialist Party supports mass resistance of the Palestinian people against the occupation with the right to armed self defence. The resistance of Ahed Tamimi is dangerous to the Israeli ruling class as it has the potential to spark a new “intifada” or mass uprising against Israeli military rule in the occupied territories.

Such a struggle could potentially open up the real class divisions within Israeli society and win the Israeli Jewish working class over to a common struggle against its rotten and oppressive ruling class.

It could also pose the question of a democratic socialist solution to the national question where the Palestinian and Israeli Jewish people have a right to self-determination and democratic ownership and control of the wealth and resources of the region.