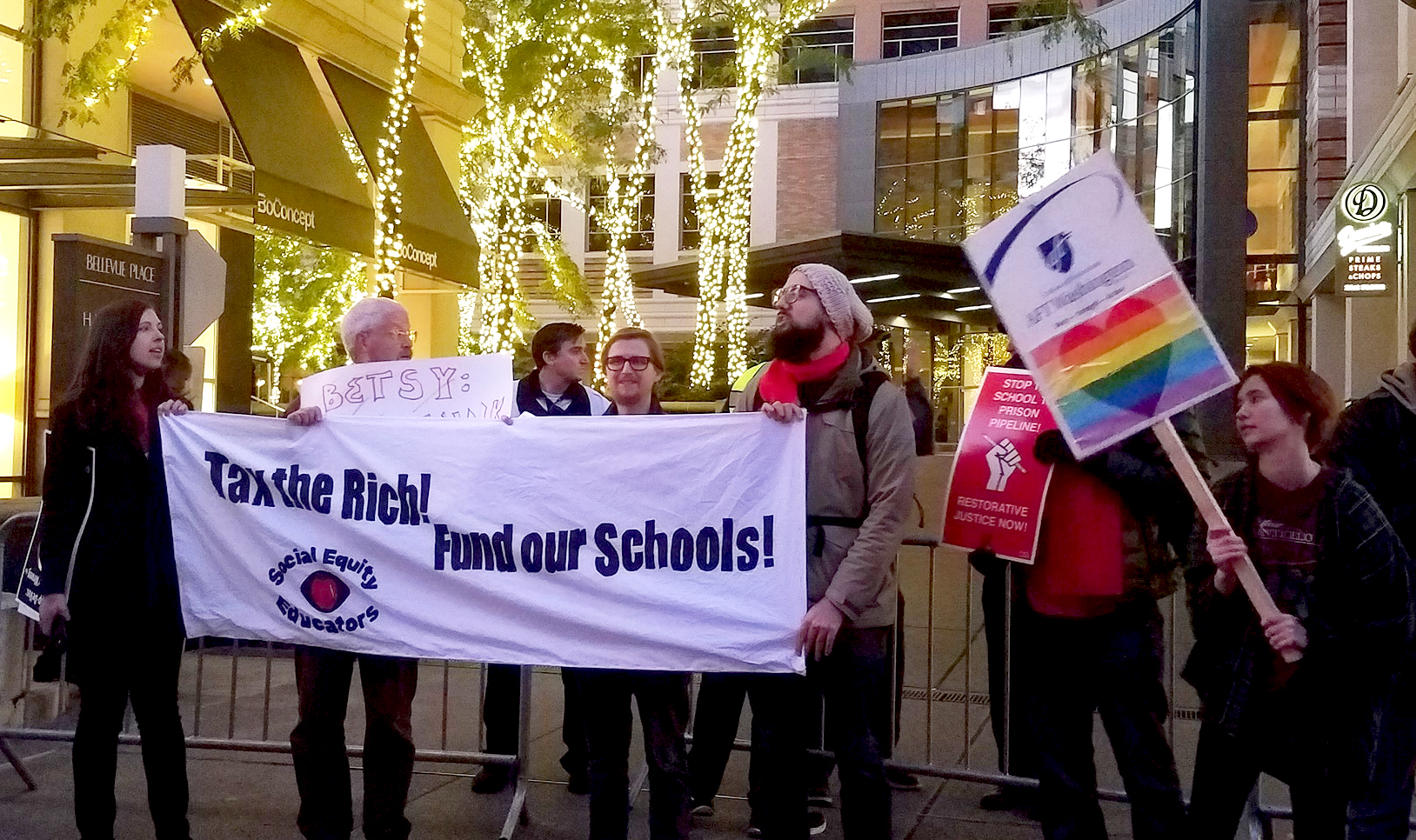 “DeVos is running an agenda of cutting money to public schools and transferring that money over to charter schools,” Justin Vinson argues just a few feet away from the hotel where Betsy DeVos spoke Friday, October 13. The substitute teacher and Socialist Alternative member is angry about the Secretary of Education in the Trump administration: “She’s trying to cut protections for students who are sexually abused or harassed. We’re out here telling her to go home and take her agenda with her.”

Vinson, a newly elected member of the Board of Directors of the Seattle Education Association, is not alone. The Washington Education Association led a protest of over 1,000 people in Bellevue, across the lake from Seattle. This demonstration against the shock-and-awe tactics of the Trump administration points in the direction of what unions will need to do in order to fight back against national right-to-work legislation as well as rebuild a fighting labor movement capable of leading and organizing non-unionized workers and young people to fight back on wider social issues.

Socialist Alternative members turned out to support this protest against DeVos’s speech at a fundraising gala for a right-wing think tank.

“We’re out here Supporting our Teachers”

At the end of the protest, hundreds blocked the entrance of the hotel and Justin was again in the middle holding, together with Stan Strasner, a large banner that read “Tax the Rich – Fund our Schools.” “Outrageous to hear that DeVos is at this $350 per plate event while we are struggling every day with the chronic underfunding of schools,” said Stan Strasner, newly elected as Vice President of the Substitute Teachers of SEA and Socialist Alternative member, in between chants of “Black Lives Matter” and “Say it loud, say it clear – Immigrants are welcome here.”

Laborers International Union of North America was out in their union colors also. When I asked what brought them out to support this demonstration which didn’t immediately affect their jobs, the answer I got was straight-forward. “We love our teachers and the teachers support the unions. We’re all in this together so we’re out here supporting our teachers.” More unions need to take an active  stance like the teachers and laborers, to develop mass actions such as this to be the foundation for the mass actions & strikes that will be needed to fight back against the Janus right-to-work Supreme Court case coming up early next year.

Many of the people there were not educators, but ordinary community members. By holding mass actions such as this, the union made itself a focal point of struggle and helped build up support amongst everyone who wants to fight back against DeVos and the whole Trump regime, which was the overwhelming sentiment of the event. This was clearly shown by the largest cheers of the event being for a call to “Impeach Trump!”

The event was not without its own internal contradictions due to the union’s continued support of corporate Democrats, many of whom were part of the bipartisan consensus of privatizing schools and expanding prisons. For instance, King County Executive Dow Constantine, hailed by City Council candidate Teresa Mosqueda as a champion for our kids, spoke at the protest about how DeVos shouldn’t be able to “take a sledgehammer to the foundation of equal opportunity”. Constantine is currently appealing a lawsuit won by activists from EPIC (Ending the Prison Industrial Complex) in a further attempt by Constantine to build a $210 million new youth jail in Seattle to lock up children, which would be a big part of the ‘school to prison pipeline’.

If the union keeps with this political strategy, their opposition will be blunted by the contradictory actions of the Democrats that they support. This is why these mass actions, which are undoubtedly a step in the right direction to defeat Trump, need to be paired with backing independent anti-corporate candidates and working to build a new party that can fight in a unified way for the priorities that working people need.