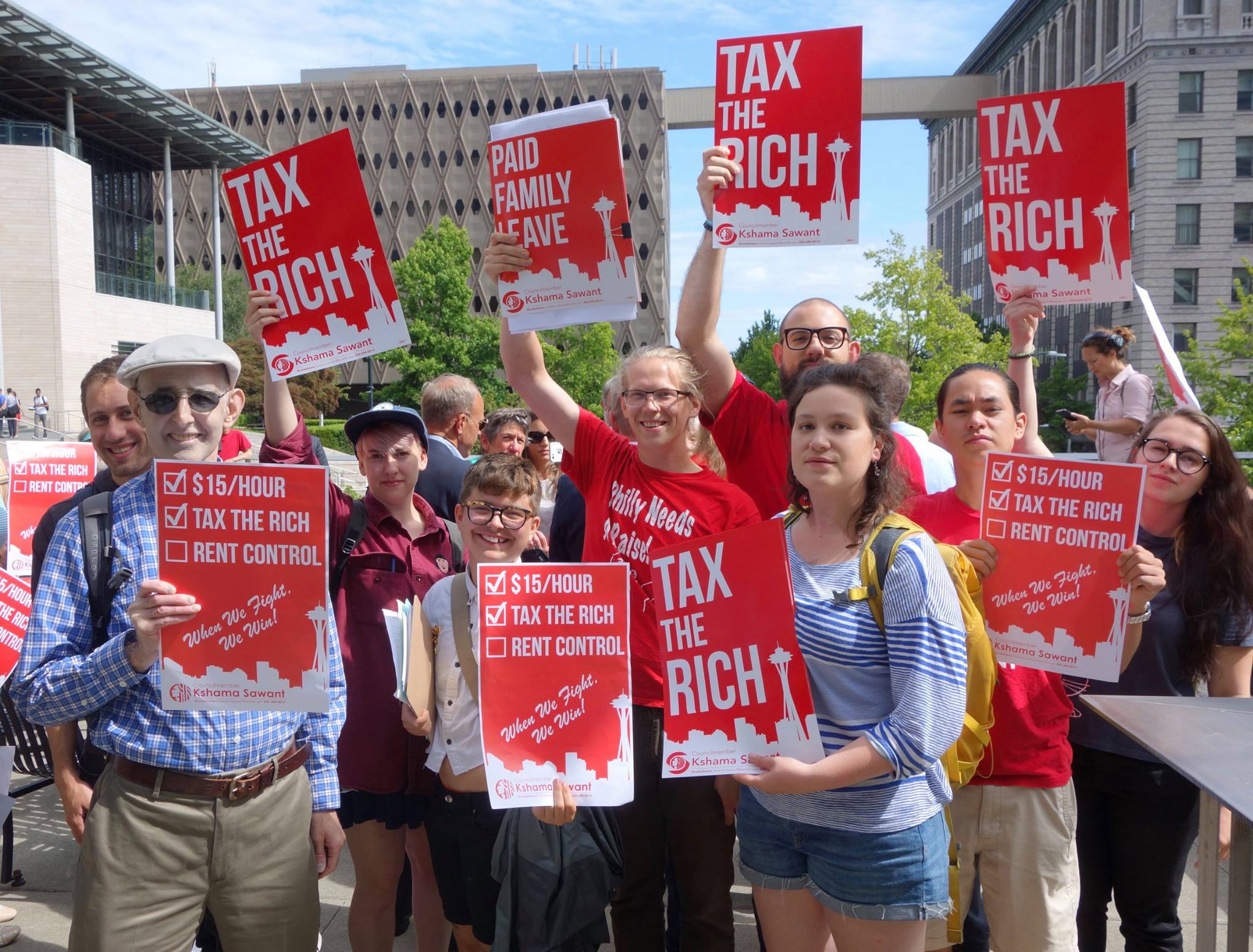 Seattle further cemented its reputation as one of the most progressive cities in the U.S. last week, when its City Council passed a law to tax the rich, sponsored by socialist City Councilmember Kshama Sawant along with Councilmember Lisa Herbold. The law places a 2.25% tax on individual incomes over $250,000 and $500,000 for married couples. It’s expected to raise as much as $175 million to fund affordable housing, education, transit, human services, and other critical needs.

Recognizing the significance of Seattle’s new tax on the rich, the Los Angeles Times reported, “a number of cities have adopted local income taxes, but no other city has solely targeted high earners and few have adopted so high a tax rate. The measure has opened the door to political warfare in the state.” Shortly before the vote, former Microsoft CEO and Seattle billionaire, Steve Ballmer, warned city officials, most of whose campaigns are financed by big business and wealthy individuals, that a tax on the rich would “drive up wages here and cause [company executives] to think about moving jobs elsewhere. That will certainly happen.”

Despite this, the City Council unanimously passed the tax on the rich and a chorus of Democratic establishment politicians sung its praises. Seattle Mayor Ed Murray declared, “Our goal is to replace our regressive tax system with a new formula for fairness, while ensuring Seattle stands up to President Trump’s austere budget that cuts transportation, affordable housing, healthcare, and social services.”

As activists in an organization, Socialist Alternative, that have been fighting to tax the rich since the Occupy movement, and which ran campaigns for Kshama Sawant in 2012, 2013, and 2015, and Jess Spear in 2014, with “tax the rich” as a central demand, this is a welcome change of tune. These are many of the same establishment politicians who voted against Sawant’s City Council proposal to fund transit through a progressive tax on business. They also rejected another Sawant initiative to reduce energy rates for working people by making big businesses like Boeing and NuCor Steel at least pay the same rate as individuals.

Those of us in the movement should be crystal clear on how this came about. We didn’t win this because Seattle’s Democratic establishment suddenly began to care about the crushing impact that decades of budget cuts and regressive taxes have had on working people and people of color in our city.

It was the growing might of our social movements that led to this major victory. The establishment may have ultimately voted ‘yes,’ but not because they genuinely support taxing the rich. Mayor Murray and establishment Councilmembers like Tim Burgess and Lorena Gonzalez voted for it because we built a powerful movement over a number of years which made their continued opposition politically unviable. During our election campaigns, Socialist Alternative members spoke with hundreds of thousands of voters at the door and on the phone, held dozens of rallies, and raised a record-breaking half a million dollars from ordinary people with the bold and unambiguous demand to “tax the rich.” It was a pillar of our 2015 campaign and we made it clear to everyone we talked to that we wanted to make big business and the wealthy elite pay to fund public needs.

Once elected to Seattle City Council, Sawant worked with activists from the Transit Riders Union on the proposal to remove a regressive sales tax and instead fund Seattle’s Metro bus system with a tax on business and a commercial parking fee increase. We lost that vote, but over the past months the Transit Riders Union, led by Katie Wilson, spearheaded the Trump Proof Seattle coalition along with the Economic Opportunity Institute, led by John Burbank. The Trump Proof Seattle coalition, of which Socialist Alternative and Kshama Sawant were a part, played the leading role in this year’s fight to win Seattle’s tax on the rich.

Our movement brought together transit and neighborhood advocates, climate justice and affordable housing activists, socialists, retirees, teachers, and unions into a coalition. It met regularly to discuss and decide on the legislation and build a campaign to win it. The coalition organized Town Halls in each district, dragging along Councilmembers and forcing them to take a position with the community watching. In Sawant’s district, she and Trump Proof Seattle held a standing-room-only rally with people clamoring to tax the rich and ready to make the sacrifices necessary to win it.

Critically, even as our movement picked up steam and corporate politicians started hopping on the tax-the-rich bandwagon, we resisted the siren song of an “easier path” to victory through collaboration with the establishment, rather than class struggle. Our movement maintained an unrelenting political independence and our activist base stubbornly refused to take establishment politicians at their word. Coalition members flooded City Council offices with emails and phone calls and packed City Hall for every discussion and vote, to demand Councilmembers’ support and to warn them not to oppose or water down the legislation. This approach effectively beat back the conservative wing of the Council, which scandalously put out a push poll to test the viability of replacing the tax-the-rich ordinance with a highly regressive “flat tax” proposal.

This model of staking out a bold demand, building a movement independent of the city establishment, and relying on our own strength to win came pretty naturally this time around. That’s not surprising. It’s the same model our movement in Seattle has used to win the Fight for 15, defeat 400% increases on low-income tenants, replace Columbus Day with Indigenous People’s Day, defeat a $160 million police precinct proposal, win $29 million of public money for affordable housing, and divest $3 billion dollars from Wells Fargo in solidarity with no NoDAPL, all in just the last few years.

Yet, Seattle’s tax-the-rich and other trailblazing victories aren’t being won in a vacuum. Ever since the economy collapsed and the banks got bailed out, ordinary people have been searching for a way to beat back attacks on their living standards and win gains to improve their lives. The Occupy movement revealed how broad and deep the anger was. Bernie Sanders showed that tens of millions were ready to rally behind a “democratic socialist” campaign taking no money from big business and calling for a national $15 minimum wage, free college education, and a political revolution against the billionaire class.

Donald Trump’s election upped the ante, and in the months after his election, millions took to the streets to defend the basic rights of immigrants, women, LGBTQ people, Muslims, unions, and workers. Ordinary people are flooding into activist organizations like Trump Proof Seattle and the Neighborhood Action Councils. Socialist organizations like Democratic Socialists of America and Socialist Alternative are also seeing a rapid increase in membership.

Many of these new activists are grappling with the question of how we can defeat Donald Trump and win victories in the face of constant attacks. Do we fight Trump and make change by accommodating ourselves to what’s acceptable to the Democratic establishment and big business? Or do we build movements that fight for bold demands and are prepared to use radical tactics, including civil disobedience?

The victories in Seattle – from the Fight for 15 to tax the rich – provide activists with clear answers to these questions. Building determined movements alongside having a voice in City Hall, Socialist Alternative’s Kshama Sawant, is a powerful combination. While we will work in unity with broader forces, including Democrats like those who ultimately voted unanimously for the tax the rich proposal, we do not put our trust in corporate politicians or limit our demands to what they or their big business backers are prepared to accept. As thousands swell the ranks of activist and socialist organizations, the Seattle model has a potential to expand and win gains around the country, if the right strategies and tactics are applied.

In Seattle, the tax-the-rich fight is far from over. The right wing Freedom Foundation has already filed a lawsuit saying the tax violates a Washington state law barring cities from taxing net income. State Republican Party Chairperson, Susan Hutchison, in a press conference where she was surrounded by red “tax the rich” placards, called for “civil disobedience” and to “forcefully resist the tax.” Tax Foundation executive Joseph Henchman complained, “If it was just about the law, it couldn’t survive, but my worry is the judges will think about other considerations.” Henchman is correct that the courts are also subject to the power and pressures of social movements, as shown over and over in U.S. history, and recently with the victory on marriage equality in the Supreme Court. Without a doubt, our movement in Seattle is ready to take our fight into the courthouses as well as back onto the streets.

In the meantime, we are not resting on our laurels. We are channelling the energy that won a tax on the rich into a bold campaign for affordable housing and rent control, and knocking on thousands of doors in neighborhoods around the city. Given our track record, the Seattle real estate lobby and political establishment are already on high alert.