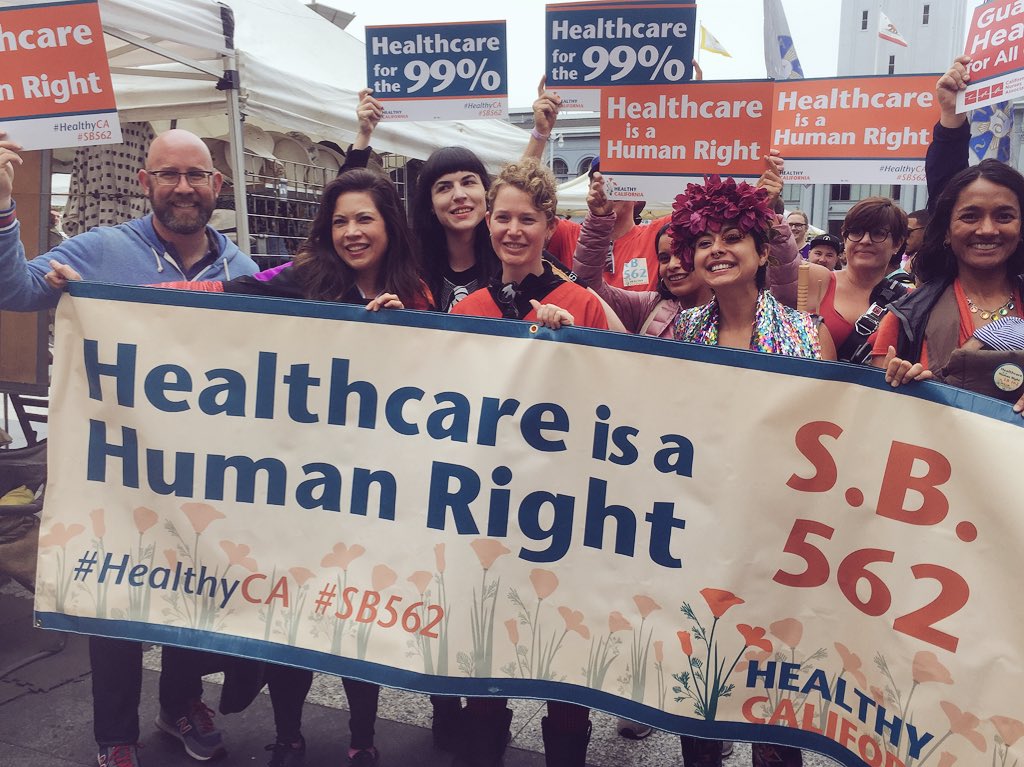 We live in a world of escalating inequality, not just in income, but increasingly in housing, education, and health care. The rich get more, while the poor live on the leftovers. Last year, eight billionaires owned more wealth than 50% of the world’s population. This year the number has fallen to five. Those without health care – or health care they can’t afford to use – are forced to make cruel decisions which can have life threatening consequences.

The Republicans have no interest in providing health care for all Americans. Their corporate paymasters want to destroy the Medicaid program for the poor. Why? To use that money to fund their proposed big tax cuts for the rich. Even Trump, opportunistically, described the Republican House plan as “mean.” Savagely cruel is more like it.

But it is the market itself that has failed Americans. While the huge U.S. health care system outspends, per person, any other nation on the planet, even with Obamacare, 29 million people are still without health care coverage. According to the WHO, the U.S. ranked 37th in the world for the efficient provision of health care, falling behind Morocco and Costa Rica.

Obamacare contained significant positive reforms especially the extension of Medicaid to millions more and preventing people being denied coverage based on pre-existing conditions. But Obamacare is still a market-based plan that doesn’t question the parasitic role of the health insurance companies and other health care monopolies.

Just five health insurance companies control 40% of the U.S. market, squeezing billions out of people who are in fear of getting sick. Additionally, the big hospital chains and the big pharmaceutical companies have made U.S. health care the most profitable business sector in the U.S. But the market is incapable – without government subsidies – of providing health care for those it cannot make a profit out of. It is out to cherry-pick patients for profit.

Single Payer / Medicare for All

The dysfunctional role of the market in health care is increasingly being understood, resulting in a growing demand for a Medicare for All or single-payer system. In an April Economist/YouGov poll, 60% said they favored Medicare for All and only 23% were opposed. Compare this with the 12% support for the latest Senate version of Trumpcare!

Under a single-payer plan, the delivery of health care remains largely in private hands, but the government replaces the patchwork of health care insurance companies as the “single payer.” This simplifies coverage and removes the insurance companies and their profiteering from the system. Such a plan could operate, at federal level, like an extension of Medicare, the government health care system for the elderly, extending coverage to all, regardless of the ability to pay.

A single-payer system should be funded by taxing the rich. The right wing and the for-profit medical companies have argued that a single payer/Medicare for all system will increase costs. But this is a lie. Administrative costs as a proportion of total health care expenses has doubled since 1980, according to a BMC Health Services Research study. In the same study, it estimated total billing and eligibility paperwork at $471 billion per year, and that a single-payer system would reduce this number by $375 billion. A single-payer system, by removing the myriad of insurance companies and paperwork, would also simplify and potentially shorten the road between getting sick and getting better.

While a single-payer would be a dramatic improvement over the current market-based system, it is not a complete solution to the health care problems. That’s why socialists support bringing all health care provision into a democratic, publicly owned system.

One of the most popular health care systems in the world is Britain’s National Health System (NHS). The NHS was established following the landslide victory of the Labour Party in the 1945 elections at the end of World War II, after which, the government brought all hospitals into public ownership and made all doctors employees of the national health plan. Its goal was to serve the people from the cradle to the grave.

Even after 40 years of continuous cuts to the welfare state by successive neoliberal governments in Britain, no political party can win any election if it even suggests cuts to the NHS. But, capitalism, while reluctantly accepting a national publicly-owned health care system, continues to attempt to undermine it.

A nationalized health care system would go a step further than a single-payer plan. The huge profits of the big hospital corporations, the so-called health care providers, would be eliminated entirely, freeing up social resources for patient needs. The pharmaceutical giants should also be brought into public ownership which would massively reduce the cost of prescription drugs.

But, in this period of structural crisis of capitalism any public health system will be under constant threat from corporate political parties. Neoliberal governments across the globe are continuously undermining and seeking to discredit all public services. Nothing public or free is safe from the circling vultures that smell the potential for profit. While national health plans exists alongside the market economy, capitalism will continuously be attempting to both undermine it and exploit it for profits. That’s why any step towards a publicly-owned health care system would also have to be linked to broader socialist policies.

For example, a socialist government would bring the big banks into public ownership to break their death grip on the economy. This would free up the capital to invest in programs that really benefit ordinary people. Oil and energy companies would also be nationalized as part of moving towards a renewable energy based economy.

Under a socialist society, health care would be free, accessible and democratic. Health care priorities for resources and research would be shaped by a public, democratic debate and discussion.

A socialist society in guaranteeing free college education could encourage hundreds of thousands of young people into the medical field. Freed from the dictates of the market and profitability, hospitals, clinics, and health care workers generally would have their fingers on the pulse of community wellness.

Those isolated under capitalism, those viewed as having no value, including the old and the disabled, would be a valued part of a socialist community, receiving both regular health care visits in their homes as well as having individualized social support.

Women’s health, reproductive rights, as well as safe and free abortions would be guaranteed. Wellness would also be promoted by bringing agribusiness and corporate food giants into public ownership and focusing on food production geared to the needs of a healthy population.

Socialist Alternative supports the fight for single payer at state level as part of building the movement towards Medicare for All nationally. Medicare for All would be a huge step in the right direction: a step towards taking profit out of health care. But we should have no illusions. The full arsenal of Big Insurance and Big Pharma will be mobilized to defeat this. In 2016 alone, drug makers spent $240 million lobbying in Washington D.C., and the insurance industry spent $157 million. The health care industry represents a full sixth of the entire economy. Like oil companies that will never willingly walk away from oil in the ground, the big health care business interests will not walk away from what they see as their cash cow.

The struggle to win single payer puts the corporate leadership of the Democratic Party on the spot exposing their ties to the insurance and pharmaceutical industries. Simultaneously, as working people raise heat on the Democrats, the Democrats’ big financial backers will be raising heat on the them. A party cannot both represent the interests of working people and of big business. Socialist Alternative supports running independent and socialist candidates who truly support single payer and refuse to take corporate money.

The NHS in Britain was won during a huge post-war wave of revolutionary upheaval. Capitalism feared for its very future and was forced to make significant concessions to the working class in many countries. In the coming years, with neoliberalism stumbling, the idea of public ownership can make a comeback. The victory of single-payer in the U.S. will require a huge movement of working people for capitalism to accept the burial of the big health insurance companies, and their billions in profits with them. This movement will not stop with single payer but will increasingly question the system that has made so much human misery possible.