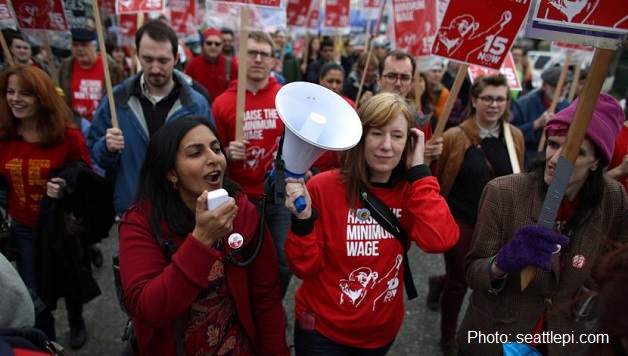 Since Inauguration Day, millions of people have taken to the streets to fight against Donald Trump’s right-wing agenda. Yet the president is continuing his attacks.

In the last week alone more than six hundred immigrants have been rounded up by US Immigration and Customs Enforcement (ICE). Here in Seattle, the administration appears to be using their illegal detention of a twenty-three-year-old father, Daniel Ramirez Medina, as some sort of bigoted “test” of the Deferred Action for Childhood Arrivals (DACA) program.

This is only a small taste of what’s likely to come with Trump promising to deport millions. ICE is likely at some stage to start full-scale workplace raids.

It will not be enough to play defense. As millions ask “what will it take to stop Trump?”, a discussion about strike action has been rapidly developing. The “chaos” we created at the nation’s airports gives a hint of what’s possible. In spite of the protests being rapidly pulled together protesters won the immediate release of detained immigrants and even pushed sections of big business into coming out against Trump and his Muslim ban.

But we need to think deeply about where our strength lies and how to create disruption on an even greater scale. Working people have enormous potential power to shut down the profits of big business by taking action in their workplaces like slowdowns, sickouts, and strikes.

Last week, many organizers of the January women’s marches, joined by Angela Davis and others, called for a women’s strike on March 8 (International Women’s Day), to escalate the fight against Trump and build on the massive January 21 marches.

If the big women’s organizations, like Planned Parenthood, were to join in this call it could have a profound impact by bringing hundreds of thousands again on the streets and this time tapping into the strategic potential of mass workplace action. Unfortunately, the leadership of many of these organizations are often too timid due to their political outlook and ties to the Democratic Party establishment. In many cases it will take serious pressure from below to overcome this barrier.

March 8 can be a springboard to even larger protests and strike action across the country on May 1, International Workers’ Day. Historically “May Day” has been a global day of mass working class action. Immigrants restored the tradition of May Day to the United States in 2006, when they organized rallies of millions and hundreds of thousands went on strike as part of the “Day Without an Immigrant” in response to brutal Republican attacks.

The rapid pace of events may make May 1 seem a long way off, but we will need that time to organize a huge nationwide action which unites immigrants, women, union members, the Black Lives Matter movement, environmentalists, and all those threatened by Trump.

Let’s use the coming weeks to begin planning for workplace actions as well a mass peaceful civil disobedience that shuts down highways, airports, and other key infrastructure. Students can organize walkouts in their schools to send a powerful message that youth reject Trump’s racism and misogyny.

The participation of the labor movement would need to be central to this effort. With a clear lead from the union leadership millions of workers would eagerly respond. One day public-sector general strikes in key urban centers around the nation would be possible. Unfortunately, despite the attacks Trump is preparing against unions including national “right to work” (for less) legislation, some labor leaders believe they can try and appease Trump rather than going all out to build resistance. Other union and progressive leaders hope to be saved by the 2018 or 2020 elections, but we cannot wait two years to defend ourselves. Others will point to the undemocratic restrictions in American labor law.

But rank-and-file pressure can drive home the idea that May Day actions have more potential to change the parameters of US politics than decades of insider lobbying. Talk of strike action is already bubbling up within the labor movement. Last week, the Seattle Education Association passed a resolution for the Washington Education Association, the National Education Association, and other AFL-CIO unions to call on their affiliates for a one-day nationwide strike on May 1.

Two days later, the board of directors of the Minnesota Nurses Association passed a similar resolution, this one calling for “an intense discussion about workplace education and information meetings and protest action on May Day, May 1st 2017, including a discussion within the AFL-CIO about a call for a nationwide strike that day.”

Rank-and-file union members and left labor leaders should rapidly move to bring resolutions and make the case within their own unions for May 1 strike action.

Without a union it is of course much harder for workers to strike. We should appeal to everybody to support this strike and join in where it is possible to do so. We want the largest possible show of force, while keeping in mind that such actions would be too risky for some workers to take part in.

This is a long battle and we are just starting to get organized. Let’s use March 8 and May 1 to build our strength and lay the basis for even stronger actions that allow for larger numbers of workers to strike.

Our strength is in numbers and organization. We can protect each other best against retaliation from our bosses by organizing our co-workers to join with us and building widespread support in our communities.

Where there is no formal strike or any union, other forms of workplace action can include using individual sick days or vacation days, organizing for a lunch-time meeting of your co-workers, or possibly leaving work early to join protests (as happened in Poland last October).

We will not defeat Trump in one day alone. But a nationwide strike on May Day would, without a doubt, represent an enormous step forward for our movement.

Let’s seize the time and make this May Day a turning point in the struggle to bring down this dangerous administration and put forward the type of politics than can challenge the rule of the billionaire class.