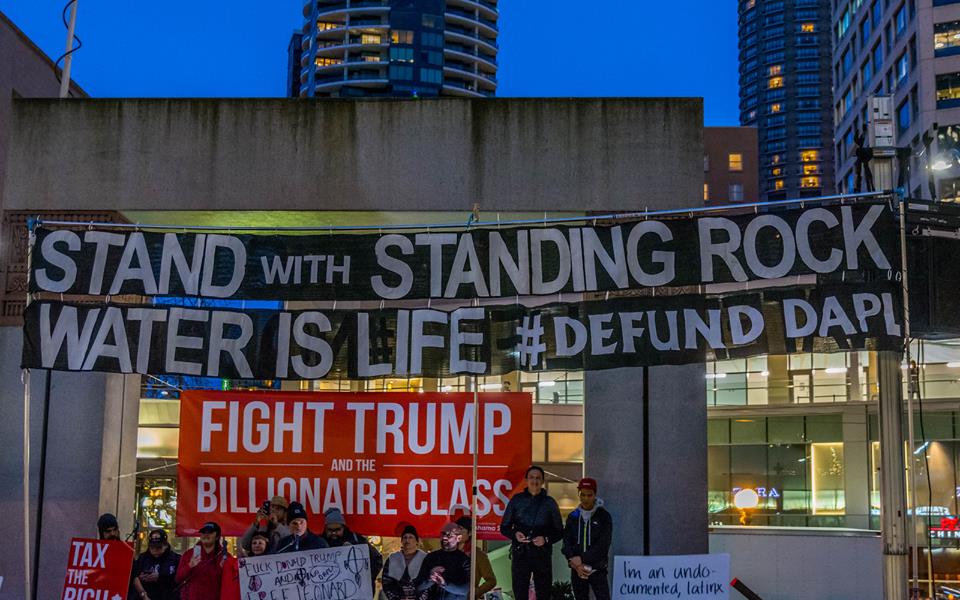 On February 8, 2017, the movement to stop the Dakota Access Pipeline won a significant victory when the Seattle City Council unanimously voted on the bill Kshama Sawant wrote with activists to divest Seattle from Wells Fargo.  On February 1, after our committee vote, Kshama Sawant spoke about how this was a stunning rebuke of Wall Street, Big Oil, and the Billionaire Class. Below are her closing remarks after the final vote.

“Thanks to all the Councilmembers for voting Yes on this legislation. As far as I know, Seattle is the first city to have divested from Wells Fargo. The example that we have set today can be a beacon of hope to activists all around the country, looking to change the economic calculus of corporations who think that investing in the Dakota Access Pipeline will be good for their bottom line. We’re making it bad for their bottom line.

I want to acknowledge the victories that have already been achieved. The University of California divested, to the tune of $47 million, the day before our committee vote. But, after our committee vote, the Muckleshoot tribe divested from Wells Fargo, and a Dutch bank, ABN AMRO, divested from the pipeline – at least partly because of the pressure we’re building. And my staff member Ted Virdone told me that he’s actually on the phone right now with an activist from Santa Barbara who wants their City Council to divest from Wells Fargo, and they called us to ask us how did we do this.

The real power of this ordinance is that it can be used as a tool by movements to put real financial pressure on Big Business by first putting pressure on politicians. And I really agree with those of you who said we need to use this momentum not only against the pipeline–put that pipeline to rest once and for all, and will be critical in our fight against climate change, and fight for indigenous rights–but we should also use this to build our fight for Seattle’s rights to a public bank.

And what an honor it is to have been part of this inspiring movement. We had a little snow in Seattle yesterday, but that is nothing compared to the images of the courageous people in Standing Rock who battled blizzards to hold the line against the oil lobby and against banks. That is truly inspiring.

Some of you have personally traveled to Standing Rock to join the protests. Others have demonstrated in solidarity here, through our NoDAPL Seattle movement, and together we are building the power of regular people to fight to take our world back from Trump, the billionaires, and the oil lobby.

Let’s think about, locally, the power that we have built through this specific movement in Seattle:

As you all remember, my fellow activists, you and I, we sent this legislation for introduction on November 1 last year. By mid-December it still had not been introduced yet in Committee, so our movement came to Full Council to demand its introduction—and we won.

By mid-January, it still had not been heard, and our movement called Councilmember offices to get its hearing—and we won.

A new draft of the legislation was introduced that was excellent in many ways, but omitted the role of the movement itself, and we moved five amendments to restore that language—and we won!

I want to thank all of you. First of all, most of the people who have led this movement are too numerous, and that’s what makes it a powerful movement. But I still wanted to name a few names.

I wanted to thank all of the staff members – Kirstan Arested, Dan Eder, and Patricia Lee in Central Staff for writing this, and working with us, and working so hard. Thanks to the Finance and Administrative Services, which is a City department, and also to the City Attorney’s office, specifically Kristin Lamson who has been working on this with us since November.

My fellow activist, Nikkita Oliver, who has made this important recognition that the struggles of all oppressed peoples are united.

Thanks also to my staff member, Ted Virdone, who many of you know, and Rachel gave a gift for him, too, which I have accepted on his behalf, and which I will be conveying to him soon.

Thanks also, and I am speaking now as a member of the labor movement, to the International Brotherhood of the Teamsters who just sent a letter to Wells Fargo’s Executive Vice President Jeffrey Grubb, through his leadership role on the MJ Murdock Charitable Trust, has helped finance the extremist anti-labor Washington State-based Freedom Foundation that has fought against workers’ rights every step of the way. And I know them personally, because they were fighting against $15/hour.

This further shows that the rights of workers as a whole, and the survival of the labor movement, is so tied to the fight against the Dakota Access Pipeline, the fight for black and brown rights, and the fight against climate change. Thanks to everyone who has sacrificed, sweated, and bled to build this movement.

There is no guarantee that when we fight, we will win; but it is for sure that if we don’t fight, we will lose. And I want to thank the Indigenous community as a whole for showing so clearly to all of us that our fight for our planet is paramount.

And the last point I’ll make is that we live in what I feel is an irrational world. OXFAM reported that 8 people own the same wealth as the bottom half of the world’s population – that’s 3.5 billion people — combined. That is, in my view, completely irrational. It’s irrational that we are so divided in wealth that wealth buys the power to write laws that benefit the rule of a few at the top, and no one else. And nowhere is that more starkly visible then with the big banks and oil companies.

In any rational world, the trillions that are in the hands of multinational oil companies would not be used to lobby for wars in Iraq and pipelines poisoning our water and climate. If we had any democracy over our economy, those trillions would be used to transform the energy infrastructure into renewables and to create decent living standards for all human beings.

But, sisters and brothers, it is not a rational world under capitalism. So our fight today is very much linked to our larger fight against Big Business, against Wall Street, against Trump and the Billionaire Class, and against capitalism itself.

And this is the last point I’ll make – this is radical. When we build movements to challenge the status quo, and when these movements are powerful enough that they force corporate politicians to take a stand in favor of the movement when it is not their instinct, that is radical. Fighting against the status quo is radical. Let’s not allow corporate politicians to say, “We’re doing this anyway, you can just go home.” No! We not only have to recognize the role of the movement in this, we must redouble the efforts of our movement if we are to win against the Dakota Access Pipeline and against Trump.”

A Socialist Strategy to Win $15 – Lessons from Seattle