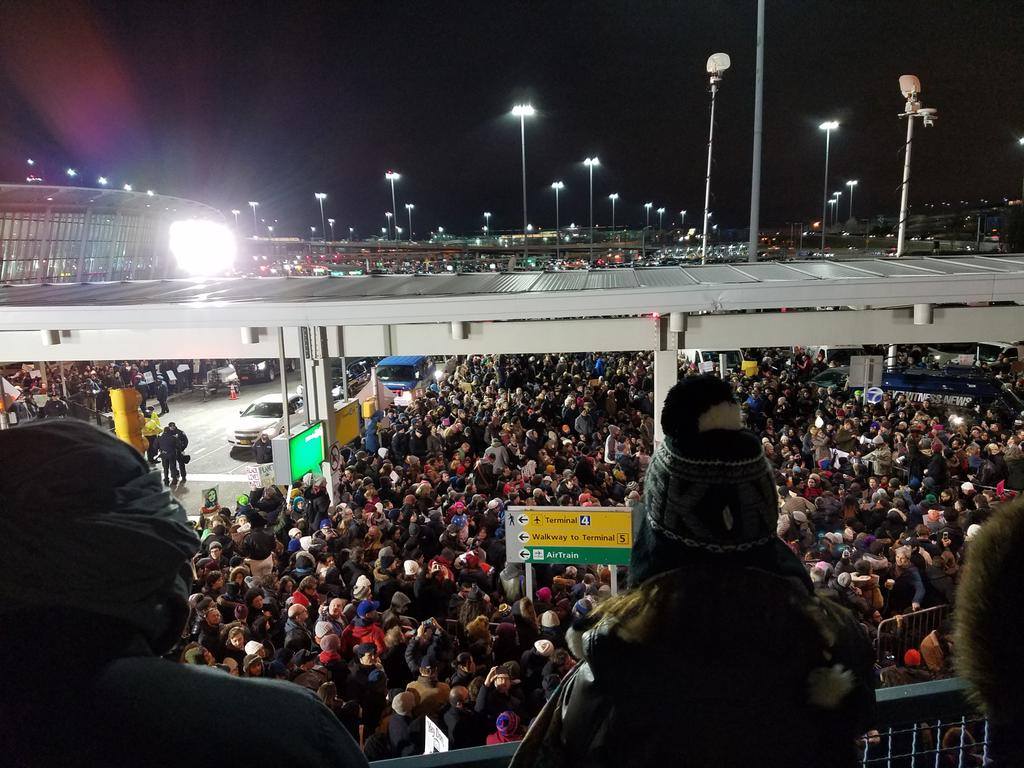 A volcanic eruption of mass protests at airports across the U.S. has won a temporary stay of execution against Donald Trump’s ban on refugees and Muslims from entering the country. Trump ordered the ban on Friday afternoon, barring all refugees from entering the U.S. for 120 days, barring refugees from Syria indefinitely, and blocking entry of people from six Muslim-majority countries for 90 days. The ban immediately caused havoc around the world.

The American Civil Liberties Union estimated that between 100 and 200 people were stopped at U.S. airports between Friday and Saturday. Many were detained, and others turned back. On Saturday morning, the ACLU filed a lawsuit on behalf of two Iraqis detained at JFK International Airport in NYC. As word got out, a spontaneous mobilization of thousands of people from across New York hauled out to JFK and clogged up Terminal 4.

At 6pm, the NY Taxi Alliance called for a one-hour stoppage of all pickups from the airport. They wrote on Facebook: “Our 19,000-member-strong union stands firmly opposed to Donald Trump’s Muslim ban. As an organization whose membership is largely Muslim, a workforce that is almost universally immigrant, and a working-class movement that is rooted in the defense of the oppressed, we say no to this inhumane and unconstitutional ban.”

The JFK protest showed the way forward to people around the U.S. looking to fight back against the ban. More than 80,000 people watched the BuzzFeed livestream of Facebook, and soon after, thousands of people rushed to airports around the country in defense of detained refugees. Thousands rallied at airports in Chicago, Washington DC, Boston, Newark, Dallas, Los Angeles, San Francisco, Portland, Seattle, and elsewhere.

Under pressure of the protests, an emergency hearing was granted for the ACLU’s case at the U.S. District Federal Courthouse in Brooklyn. As word spread, protests rapidly gathered outside the court building, too. Just before 9pm EST, judge Ann Donnelly ordered a stay of execution, blocking further implementation of Trump’s ban on travelers with visas. Meanwhile, Sunday morning, White House Chief of Staff Reince Priebus announced the Trump administration had decided to reverse its decision to include green card holders in the ban.

The stay for visa holders is temporary and the Trump administration will undoubtedly appeal it. Many detainees were released Saturday. But reports in the New York Times and Washington Post suggested some refugees may still be detained and their fate may not be decided until further court hearings. The ACLU later said they had received “multiple reports” that customs agents were ignoring the stay and illegally enforcing Trump’s ban anyway.

The lesson from these incredible events is clear: we don’t have to wait until 2018 or 2020 to stop Trump, and we don’t need to rely on establishment politicians. We can march in our millions and we can apply the social power of immigrants, young people and the wider working class through mass direct action to stop Trump’s reactionary agenda dead in its tracks.

The actions of the NY Taxi Workers Alliance, in particular, points to the potential collective power of the immigrant and wider working class, when organized, to stop the flow of business as usual through major workplace actions and strikes. The taxi drivers action stirred memories of the 2006 Day Without An Immigrant when the Port of LA was completely shut down by a mass strike action that helped defeat Republican legislation, at the time, calling for the deportation of all undocumented immigrants.

We need a broad discussion throughout the resistance movement about how to build toward a major escalation of protest, walkouts and mass workplace actions before the next appeals hearing.

Below, we publish an eyewitness report from Alyssa Pariah and Mark Rafferty, who were with Socialist Alternative members at JFK airport:

The atmosphere today was incredibly energized as crowds streamed into the area outside JFK Airport’s Terminal Four, where there were reports that 12 immigrants and refugees were being detained inside. Despite the long trip and extra fares it takes to get to JFK by public transportation, hundreds of people made the trek from the city, arriving angry, determined, and ready to do what it took to keep Trump’s despicable racist policies from being enacted. The crowd seethed with energy as it grew to over 2,000 people, making strong and focused political demands to release the detainees, end the ban, and stop the border wall. As the crowd repeated chants including “Let them In”; “Say it Loud / Say it Clear / Refugees Are Welcome Here”; and “No Wall, No Registry, F** White Supremacy”, travelers leaving the airport stopped on their way out to voice their support. The protesters erupted into cheers in the evening when word went around that the New York Taxi Workers Alliance was stopping pickups from the airport for an hour in solidarity. Not long after that, all drivers were forced to stop pickups, as the crowd spilled out into the roadway and blocked the roadway for hours. What was clear from the JFK protest was that people had come away galvanized from the protests of the past few weeks, and they were ready to be more militant, more pointed in their demands, and more persistent than before.

The protest outside served to create massive public pressure to complement the heroic efforts of lawyers and legal aid groups working inside the airport to protect the detainees from deportation and file legal challenges to Trump’s order. The news that a judge temporarily blocked Trump’s order was met outside with relief and celebration. But after the announcement, the crowd didn’t disperse, but instead stayed strong reiterating its demands for a full repeal of the ban. As the night went on, it wasn’t until around 11 PM, more than 12 hours after the protest had started, that police action and cold weather led most of the crowd to head home and rest up for Sunday’s planned protest in Battery Park.

While many groups helped call people out, the largely spontaneous turnout was impressively cohesive despite having no visible leadership; at the same time, the lack of leadership made it difficult to make decisions such as when to escalate and when to end the protest. Having some decision-making body would have enabled people to discuss and decide democratically if they wanted to continue the protest throughout the night.

The people who came out should be applauded for the incredible show of solidarity and determination that pressured officials and judges to halt the implementation of Trump’s order.

Coming just one week into Trump’s presidency, this is a massive blow to his legitimacy and momentum. It showed that Trump and his agenda can be slowed, and eventually stopped by mass movements of working people. In New York, people are learning lessons from the past few weeks, understanding better the power they have when they take to the streets and also the necessity of channeling that power into pointed, political demands. If today was any indication, the fight against Trump has more momentum, and more victories ahead.”