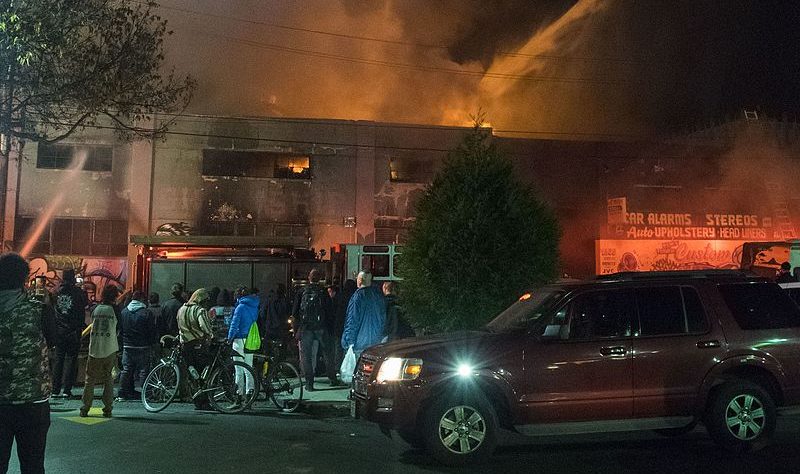 Nathalie, 23, a native Oaklander who would sometimes pay the $10 cover to see music at Ghost Ship was out of town when texts started flooding in Friday night asking, “Are you okay?” For the next few days, like so many local youth, Nathalie would be constantly checking her phone for the latest news on those confirmed dead.

Ghost Ship was a live/work art space and underground music venue. It provided space for artists to express themselves outside the confines of traditional venues restricted by the need to make a profit. It was an important haven for artists, youth, and LGBTQ people and it nurtured the counter-culture necessary for a thriving art community. 36 lives have been confirmed lost in the fire that consumed the building.

“You could relax there. It was a place to socialize,” Nathalie explained, “it was cool, but it was a fire hazard: the couches, the curtains, the pallets, everything.” Upstairs, the maze of quirky rooms became terrible traps when the lights went out after the fire began downstairs.

Tents or unsafe indoor spaces are the choices the free market offers the legions of low paid millennials in Oakland and many other cities. If the national news media that showed up outside the burnt shell of Ghost Ship were to walk down the road a few blocks they’d see some of the scores of tent communities that have sprung up under freeway overpasses.

As a result of this tragedy, huge numbers of tenants are now being evicted from unofficial live-work space as landlords fear safety-related lawsuits. A study by the Los Angeles Times found “about 1 in 10 of California State University’s 460,000 students is homeless, and 1 in 5 doesn’t have steady access to enough food.” Additionally, a survey by Wisconsin Hope Lab found close to 50% of community college students were unable to afford rent once in the past year, or were unable to afford food once in the past month.

This fire is a direct result of the tenuous living conditions forced onto people by this system that cares more about profits than it does human beings. That is clear by the absence of affordable housing or public facilities for artists and young people. This, combined with low wages, high healthcare costs and massive student debts drive artists, young people, and indeed everyone, into more and more precarious situations. Building and fire regulations are good, and enforcing regulations is important, but they are not the root cause of the problem.

Disasters like the fire in Oakland, are often exploited by neoliberals to accelerate their developer-friendly agendas for cities. Baltimore has provided a template for exactly the wrong way to respond. Baltimore city officials lashed out at artists, evicting tenants from the Bell Foundry art community with less than one hour to gather their belongings. Many in establishment circles in Oakland are calling for a similar approach, and we must resist this. We need to let Oakland City Council know that their pro-developer politics will be defeated. The desire for a different world is there. We need to fight for higher wages, wider rent control, and we need to protect our artists.

At a vigil for those lost in the fire, Oakland’s pro-developer Mayor, Libby Schaaf, was booed down when she attempted to address thousands of mostly millennial mourners. In this moment, the sharp division in Oakland was apparent. Oakland’s low paid, gig economy, precarious workforce on the one side and the robber-developer-barons and their political henchmen on the other side. The larger group was there to mourn their sisters and brothers; the 1 percent were there to politically exploit the moment.

Rents in Oakland have risen to the fourth highest in the nation. Average Oakland rent for a one bedroom apartment doubled in the last five years, from $1,264 per month to $2,409. (Rent Jungle.com) Oakland’s Democratic Party establishment, in power in Oakland for forty years, has done nothing but encourage the environment that has created ballooning rents. Landlords bend and break rent control laws, knowing that the city council is not enthusiastic about enforcing its own regulations. Oakland City Council, which has seen five police chiefs in six years, cannot even police its own police department. In June this year, three police chiefs resigned in nine days over the ongoing scandal of Oakland officers operating a child prostitution ring. Murders by OPD and police brutality continue unabated in the background.

Root Causes of the Tragedy

Oakland, post-Occupy movement, has become a magnet for millennials from the impoverished California Central Valley, through the mountain states and beyond.  Most aren’t seeking their fortune. They’re often looking to connect with like-minded young people who are embracing Oakland’s diversity and non-conformity. These are the people that service the tech boom: the baristas, the bar backs. Jack, 23, born in Oakland, explains that everyone he works with at the upscale restaurant where he busses tables is a transplant, except him. Many of the 36 people who perished in the Ghost Ship fire were also relatively recent arrivals, almost all millennials.

The finger pointing in the corporate media has wavered between attacking either the inept city inspectors or the eccentric live-in manager of the Ghost Ship. Very little media anger has been leveled at the landlord, or the big developers who work out of their cozy corporate offices looking for opportunities to drain more profits from Oakland’s hot real estate boom. Oakland city council in recent years dumped the commercial space inspection process into the lap of the already budget-axed city Fire Department. The city district attorney is looking for possible murder charges for the 36 deaths.

Seeking the punishment of individuals is the obvious route for an establishment that did nothing to stem the evolution of all the ingredients that laid the basis for this fire – the low pay, underemployment, and high rent battles that almost every millennial faces. Rising tuition and escalating education debt have only accelerated the struggle to find somewhere affordable to live. To many, that means staying on a friend’s sofa or sleeping in their cars. In east Oakland, Nathalie has noticed, “the homeless are getting younger, so many young people.”

We deserve quality, publicly-funded, free facilities for artists and young people to use and adapt safely for their own expression. These are not luxuries and they do not only benefit artists. Germany spends $20 per taxpayer on such programs, while the U.S. spends 43 cents per taxpayer.

To address this overall situation and the underlying causes of this tragedy, we call for:

We also need to fight for a different world – one that we can shape. One that can include the talents, skills and creativity of young people and working-class people.

Enjoyment of art is essential for us to thrive, and for culture to develop. Artists will create, and that is unstoppable. The question is what conditions do we as a society provide for them?

This situation was preventable; it was not an inevitable ‘necessary evil.’

When we as socialists say that capitalism doesn’t work, this is what we mean… In an area brimming with technology, wealth, and innovations, a classroom’s worth of young people burned to death because it wasn’t profitable to provide for their basic living and cultural needs.

We Have to Fight for a Workers Recovery

2020: A Historic Indictment of Capitalism

ABOUT US
Socialist Alternative is a national organization fighting in our workplaces, communities, and campuses against the exploitation and injustices people face every day. We are community activists fighting against budget cuts in public services; we are activists campaigning for a $15 an hour minimum wage and fighting, democratic unions; we are people of all colors speaking out against racism and attacks on immigrants, students organizing against tuition hikes and war, people of all genders fighting sexism and homophobia.
Contact us: info@socialistalternative.org
FOLLOW US
© Socialist Alternative 2020 | All rights reserved
195 Shares
Tweet
Share195
Pin
Share