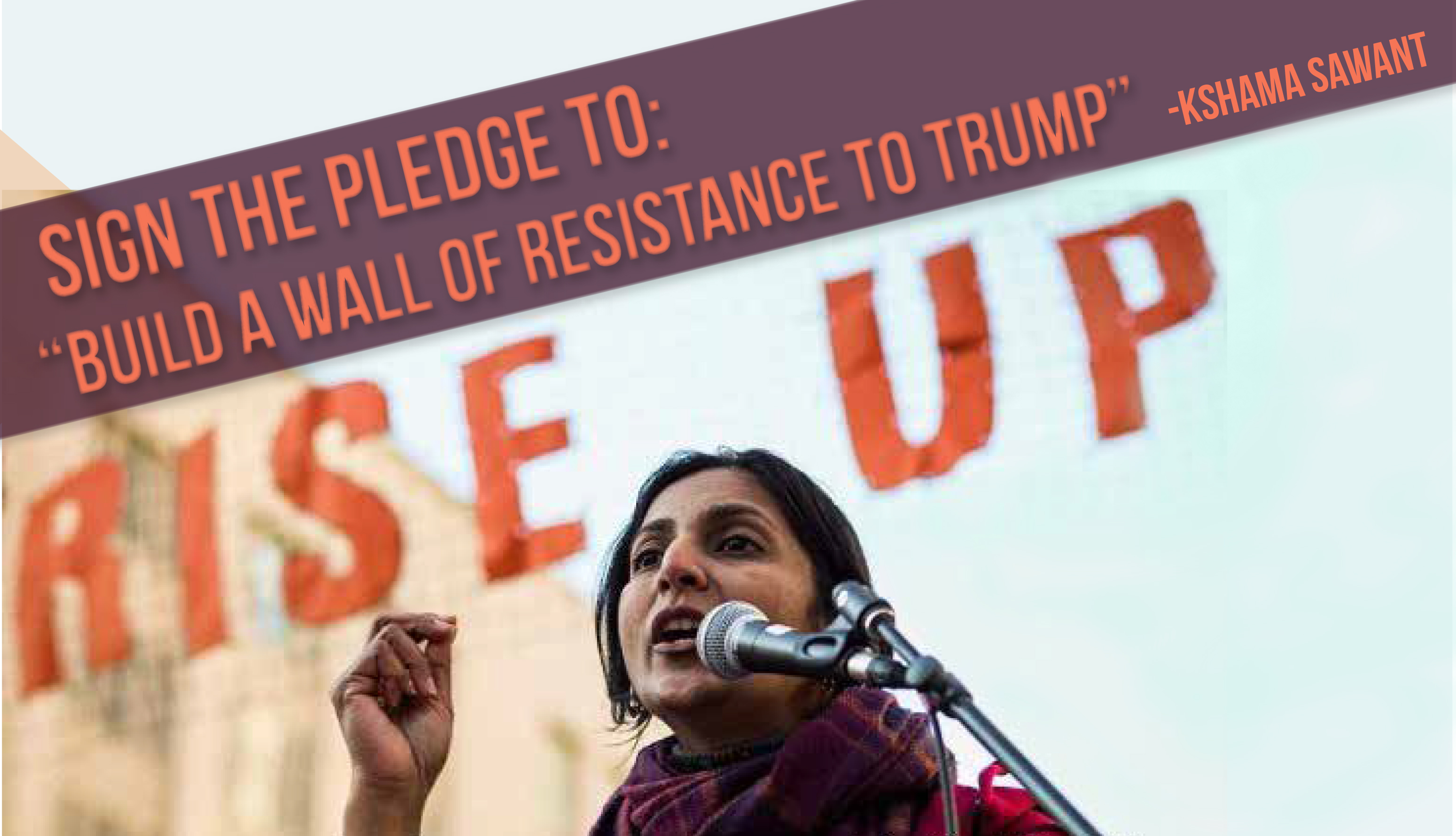 To force through their right-wing agenda, Trump and his backers are counting on us to succumb to fear, isolation, division, and demoralization. That’s why, in the face of escalating vigilante violence – and in the face of establishment politicians urging us to “give Trump a chance” – we are launching a “Pledge of Resistance” to offer each other solidarity and the confidence to fight back.

United together, we will build a wall of resistance to Trump’s racism, sexism, Islamophobia, and attacks on working people. We can shut down right-wing attempts to scapegoat and persecute the most vulnerable among us. The first step will be massive, coordinated, nationwide protests and student walkouts against Trump’s Inauguration on January 20 and 21.

The resistance is already gaining steam. Within hours of the shocking news of Trump’s victory, my organization Socialist Alternative, alongside Movement for the 99%, and Socialist Students, were the first to call mass protests the following day in cities across the country. Within 24 hours, over 50,000 people took to the streets on the protests we organized, helping to spark a nationwide wave of protest in the days and weeks following.

Because of our role in calling for the first wave of protests, the right-wing media singled me out for racist attacks. They circulated a video of me, now watched by millions, calling for mass peaceful demonstrations of Trump’s Inauguration to shut down his agenda of racism and bigotry. Thousands have called my office, many with violent threats or racist, misogynist insults, saying things like, “You don’t belong here with the bull***t you spew from your co**su**er,” or “Drop dead and go back to turbanville.”

After these threats were publicized, the outpouring of solidarity I received gave me fresh confidence that we can build a multiracial resistance to Trump centered in working class communities. I am confident we can unite the majority of America against both the Republican right and against the billionaire class whose neoliberal policies created the conditions for Trump’s rise. To do this, we’ve got to build  solidarity around a unifying alternative vision for America, based on social, economic, gender, and environmental justice for all.

If the 2016 election taught us anything, it’s that you can’t fight right-wing populism with corporate-establishment politics. We will stop Trump with working-class solidarity around a left anti-establishment agenda and transformative policies to end economic inequality, racial injustice, and gender discrimination. We can cut across support for the right by demanding taxes on the billionaire class, corporations, and Wall Street to fund free education and a huge green jobs program to end unemployment while rapidly transitioning to a 100% renewable energy infrastructure.

Trump does not have a mandate. He lost the popular vote, and exit polls showed a majority of of his backers cast their vote to reject Clinton’s status quo corporate agenda more than to endorse Trump’s bigotry. So Trump’s victory does not mean that most ordinary Americans are hopelessly right wing. But it is a stark warning that unless we build a new political movement, completely independent of the corporate establishment, Trump will continue to exploit popular discontent to channel many into the divisive dead-end of racism, nationalism, and bigotry.

That’s why we aim to unite the Inauguration protests against Trump around the following demands:

We Need Your Support

It’s clear we cannot rely on the political establishment or corporate politicians to fight Trump. That’s why I’m appealing to you to help spread our Pledge of Resistance and to work alongside the Movement for the 99%, Socialist Students, and others to build mass protests and a national student walkout around Trump’s Inauguration.

We will also need your financial support. Movement for the 99% aims to raise $25,000 by the end of December to fund the youth-led, nationally coordinated, mass student walkouts on January 20th. Donate what you can today and, together, we can build a powerful wall of resistance to Trump and his agenda of bigotry and hate.

Finally, I want to appeal to you get active and organized. More than ever, this moment calls for building a powerful left alternative. At the core of this campaign – previously Movement for Bernie and now Movement for the 99% – has been my organization, Socialist Alternative. We are now growing faster than ever. Since Trump’s election, thousands have signed up expressing interest in joining. If you agree we need to link our movements today with a vision to completely transform this rotten, profit-driven system, I would appeal to you to join Socialist Alternative today and help us mobilize the wider struggle against both Trump and the whole billionaire class!