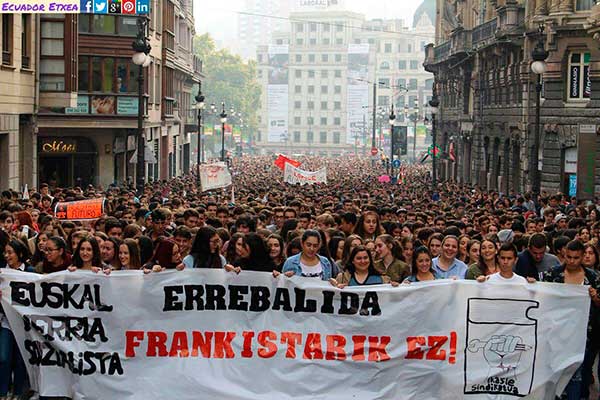 On October 26, over two million students across Spain walked out of their classes to protest cuts to education, tuition hikes, and the reintroduction of the standardized “revalidation exams.” Tens of thousands of parents, teachers, union workers, and others took to the streets alongside students in several of Spain’s major cities, including Madrid, as a show of solidarity. Organized by the national socialist-led student union, Sindicato de Estudiantes (SE), the biggest national student union in Spain, this historic one-day strike can serve as inspiration for students and workers here in the U.S.

The strike targeted the Organic Law for Improving Education Quality, or LOMCE in Spanish, which will increase tuition by up to 66% and cut resources for scholarships by 50 million euros. Both policies will clearly hurt poor and working-class students disproportionately. A key demand of the strike was to abolish “revalidation exams” – standardized tests that must be passed to move to the next grade. They also want to abolish similar elementary and middle school tests. These exams were last used in Spain under the fascist dictator Francisco Franco, but the government is now trying to reintroduce them. Protesters argue that the education system is becoming too inaccessible to lower-income families, creating an inescapable, determined academic path and a push toward privatized education.

Passed in 2013, LOMCE is a continuation of austerity measures imposed by the Spanish government after the 2008 global market collapse. LOMCE shortens the time needed to obtain certain degrees. The stated purpose is getting students into work faster, but it actually devalues the worth of a degree. This push toward a faster school-to-work path takes away individual stability, further advancing a capitalist education agenda that is plagued by the profit motive. Education is supposed to give confidence and social mobility – but, in reality, LOMCE will hinder students from finding work because of the lesser value of their degrees.

These developments seem all too real to us in the U.S. because of the recent attacks by city and state governments on public education, cutting budgets by tens of millions of dollars in many places. In higher education, tuition costs for U.S. colleges are continuously on the rise, and student debt is a looming disaster.
Sindicato de Estudiantes has declared that unless the Spanish government meets their demands of scrapping the tuition hikes and revalidation exams, there will be another massive student strike on November 24. The Spanish students’ fight against the attacks on higher education is the fight of students and workers in the U.S. and worldwide. J