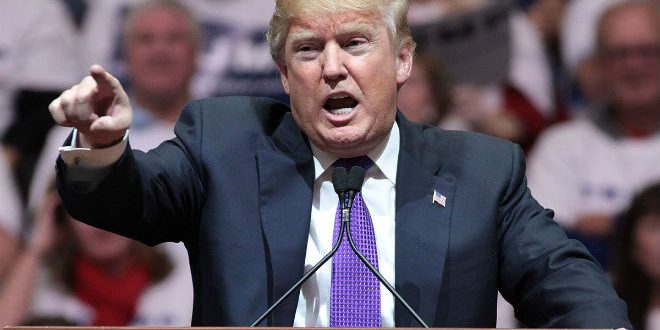 “Our party is in its deepest crisis since Watergate” – Ron Nehring, former chairman of the California Republican Party

Abandoned by many in the leadership of his own party, reviled in the mainstream media, and ranked the least popular presidential candidate in modern history, Trump has spent the final weeks of his presidential campaign doubling down on harsh attacks on the political establishment. The deep divisions in the Republican Party, made visible in the final weeks of the presidential campaign, are virtually unprecedented and mark a historic low-point for the GOP and the U.S. political establishment as a whole.

Repeating his warning of widespread voter fraud, Trump is calling on his supporters to monitor urban polling places and urging his supporters to engage in racist intimidation of voters in communities of color. Repeating far-right theories of Clinton’s links to shadowy conspiracies of bankers – barely coded anti-semitism – Trump is using the final weeks of his campaign to stir up the most reactionary and dangerous forces backing him.

Two weeks ago most media talking heads were saying the election was over, but amid the steady drip of wiki-leak scandals and then the FBI Director’s “October Surprise,” voter disgust with the second least popular candidate in modern history is once again creating a close race.

Considering his denigration of the women who’ve come forward accusing him of sexual assault, it’s easy to assume any remaining support for Trump comes from, as Hillary Clinton put it, “a basket of deplorables.” But this is a oversimplification of the real dynamics playing out in this election. Some of Trump’s supporters undoubtedly do share his bigoted attitudes, but polls show the most important issue for his supporters is a belief that they have been abandoned by the political establishment. It is precisely this sentiment that Trump is playing to when he accuses the media and political elites of conspiring against him to rig the election.

Trump’s specific claims of mass voter fraud are both racist and entirely unfounded, but his wider claim that the media and establishment are rigging the election gets a broad echo. It’s clear to any unbiased observer that the political establishment and the corporate media act in a systematically dishonest and undemocratic manner against any challenge to their profit-driven interests – from the right or left.

The recent revelation that CNN analyst Donna Brazile – also the DNC’s interim chair! – leaked CNN’s presidential debate questions to the Clinton campaign ahead of  time only reinforces the awareness among a wide layer of the working class that the system is rigged in favor of the political elites. Discussing a recent poll of likely voters, the New York Times revealed: “Fewer than half of Americans are very confident that their vote for president will be counted correctly — and most say their ballot will not matter anyway because the political process is so dominated by corporate interests.”

It is this fact that Trump exploits to maintain a base of support for his out-of-touch right wing agenda. In contrast, the Democratic Party, with Clinton as their candidate, is correctly seen as representing Wall Street and the billionaire class.

Republican leaders like Paul Ryan and John McCain claim to be distancing themselves from Trump because they are morally outraged at his blatant sexism and racism, but this is a flimsy excuse. The Republican party has relied on more-or-less overt prejudice against women and people of color for decades to stir up divisions among workers and to cultivate a social base for their right-wing corporate policies. What they really object to is Trump’s willingness to go against the interests of big business and his open criticism of party leadership and the political establishment. Big business as a whole, including the corporate controlled GOP leadership, fears a Trump presidency would provoke social upheaval and further destabilize American capitalism.

Trump has made opposition to pro-corporate trade deals like NAFTA central to his campaign. In one of his first major speeches in the general election campaign, Trump stated “I’m going tell our NAFTA partners that I intend to immediately renegotiate the terms of that agreement to get a better deal for our workers. And I don’t mean just a little bit better, I mean a lot better.” He has repeatedly referred to the Trans Pacific Partnership, a key priority of big business in the year ahead, as a “disaster”. Trump’s anti-trade stance represents a serious threat to corporate profits. Even the infamous Koch brothers, historically a reliable mainstay of funding for conservative Republican candidates, have refused to endorse or fundraise for him largely on the basis of his positions on trade.

Responding to news of the possible lucrative merger between telecom giants AT&T and Time Warner, Trump called it “a deal we will not allow in my administration because it’s too much concentration of power in the hands of too few.” In contrast, Hillary Clinton responded with  characteristic evasiveness that she would “conduct a very thorough analysis before making a decision”.

Trump’s hard-line stance on immigration, though popular with the far-right, is also at-odds with the profit-motive of big business. From agriculture to restaurants and hotels, many industries rely on the exploitation and plentiful supply of low-wage immigrant labor. Trump’s racist policy of mass deportations would put upward pressure on wages in these industries, cutting directly into corporate profit margins, and risk provoking a mass social upheaval in immigrant communities.

Let’s be clear: If elected, Trump would not deliver on his promise to raise the living standards of working people. His divisive bigotry, his fierce opposition to organized movements of working people and his inability to see beyond his own ego would render him incapable of accomplishing anything positive for ordinary Americans. It’s deeply unfortunate that he has been able to funnel so much of the anti-establishment mood in US society behind his bigoted agenda.

As anger at the political establishment has continued to rise throughout 2016, Clinton has proven an extremely weak candidate. A more capable right-populist opponent than Trump could have likely beat her handily. If she is elected, she will face a deep crisis of confidence. Every example of corporate collusion, dishonesty, or flip-flopping on campaign promises will be immediately pounced on not only by the right, but also by the growing left critics of the Democratic Party leadership, who will vote for Clinton begrudgingly to avoid a Trump presidency.

The anti-establishment mood will continue to grow. Unfortunately, the other anti-establishment pole this election season, Bernie Sanders, made the mistake of falling in line behind Clinton, the epitome of establishment politics. The left cannot afford to continue making the same mistake of pointing people towards deeply unpopular corporate-sponsored candidates. Failure to build an independent, fighting left alternative will leave the political space wide-open to right-populism and support for Trump’s dangerous ideas will likely grow. We need to build a left political force to appeal to the widest possible range of working people. The potential was already shown by Bernie Sanders campaign, whose left-wing class appeal won over more independents than either Clinton or Trump and even attracted a section of anti-establishment voters who, in the absence of a left alternative, will end up voting for Trump.

Such a party for the 99% could grow rapidly under a Clinton presidency if it bases itself in struggles for social and economic justice like Black Lives Matter, 15 Now, and No DAPL- and against the political domination of Wall St and the billionaire class.