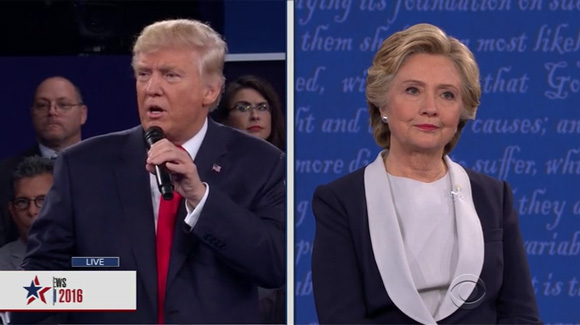 Sunday’s Presidential debate was the most brutal and personalized in recorded history, further alienating people from two candidates who are already deeply unpopular. The recording of Trump bragging about sexually assaulting women has become the most-discussed issue of the election yet, creating an avalanche of anger. The public pressure has forced Republican leaders to distance themselves from Trump, a level of division around a major party nominee for president not seen in living memory. While the scandal will undoubtedly push down Trump’s poll numbers to Clinton’s benefit, popular distrust for Hillary is only growing as the election drags on, especially after the most recent Wikileaks revelations brought her history of lies and deep ties to Wall Street to the surface again.

Bumper stickers and lawn signs that read “Vote Giant Meteor 2016: Just End It Already” are selling by the thousands. When Public Policy Polling offered “Giant Meteor” as an option for President, it gained 13% while 55% in a recent Pew poll said they were “disgusted” with the election. However, there was a way to avoid this descent into morbid thinking.

If Bernie Sanders had run as an independent – as Socialist Alternative urged – the debate would have been dominated by a discussion on inequality and Wall Street’s power over politics. This could have cut across Trump’s disgusting populist appeals and effectively exposed Clinton’s career as a corporate politician. Unfortunately, Sanders has provided cover for Clinton just as Wikileaks revealed her Wall Street speeches in which she says she has both “public” and “private” political positions and that “Wall Street should regulate itself.”

The personal nastiness in Sunday’s debate reflects a weakened and divided ruling elite presiding over crisis after crisis. The political establishment oversees a stagnating economy, massive inequality, a relatively weakened position on a world scale and a U.S. population with a lack of trust in their institutions.

The shockwaves continue to reverberate after the leaked tapes of Trump bragging about sexual assault. Meanwhile, millions of his supporters likely cheered his call to imprison Hillary Clinton on Sunday. This is not your ordinary election, and it hasn’t been from the start. This contest shows a political system in crisis and a new generation that is rejecting “politics as usual”, illustrated earlier this year in the overwhelming enthusiasm young people expressed for Bernie Sanders.

Usually during election years, protest actions die down because liberal institutions and union leaders try to focus activists on mobilizing support for the Democratic nominee. This year though, we see mass direct action by indigenous people against the Dakota Access Pipeline winning a temporary victory and continued Black Lives Matter protests throughout the country. There is widespread support for the actions of NFL players protesting during the national anthem while prisoners across the country are continuing ongoing strike action against inhumane conditions. 5,000 nurses are striking in Minnesota, and another teachers’ strike may begin today  in Chicago. Again, this isn’t your ordinary election year. These actions are only a prelude to the massive protests we’ll see in 2017 no matter who loses the election. In the meantime, the political establishment’s authority is diminished with every day this bruising contest continues.

After Trump’s sickening remarks gloating about sexual assault, the Republican establishment faces a potentially disastrous dilemma. If they don’t mobilize support for Trump in the Presidential race, then their candidates for Congress will lose votes. However, if they support a floundering Trump campaign, then they will lose support and credibility in those very same Congressional races. Republican insiders faced with this “rock and a hard place” situation are now worried about losing control in both houses of Congress. House Speaker Paul Ryan has come out saying that he will no longer defend or campaign for Trump in order to focus on defending the Republican House majority.

Trump’s “apology” did himself and the Republicans no favors, as he called the tapes a “distraction” and then tried to change the subject to ISIS when asked about his predatory remarks during the debate. Trump also brought forward women who have filed complaints of assault or harassment against Bill Clinton, reminding people that Hillary helped cover up Bill’s sexist acts. This entire scandal will mostly scare voters away from Trump, but it will also serve to anger women across the country against the whole establishment and help lay the basis for a new women’s movement in the coming years.

The same Republicans who have made careers out of attacking women’s rights and defending all aspects of oppression under capitalism are now jumping off of the “Trump train.” Dozens of GOP politicians are rescinding endorsements or calling for Trump to step down. Even VP candidate Mike Pence refused to do an appearance for the campaign although he is now “back on board.”

Of course all these people stayed on board until now despite Trump calling Mexicans rapists and criminals, attacking Muslims and African Americans as well as disparaging people with disabilities and veterans with PTSD.

These divisions show a deeper problem for a party that has been unable to attract young voters or people of color. Republicans have “doubled down” on their decades-long strategy of appealing to older white voters. And now much of that shrinking traditional GOP base is rejecting Republican policies like free trade deals, ongoing wars abroad and bank bailouts. That’s how Trump stepped in with his populist demagoguery. The Republican establishment will do anything it takes to regain control of their party after the election, but the divisions today pose deeper questions about the GOP’s future.

Hillary Clinton is known for appearing condescending, entitled and out of touch. She called Trump supporters “deplorable” and “irredeemable” while also asking why she isn’t ahead by 50 percentage points. Given that Trump is the most hated Presidential nominee in the history of polling, this is actually one of Hillary’s tone-deaf questions worth answering.

Trump combines his racist scapegoating with a populist appeal against the politicians. His opposition to corporate trade deals and some wars strikes a chord with people, especially when combined with his exposure of Clinton’s donations from big banks and the super wealthy. Clinton can’t effectively fight back because she’s complicit in declining living standards and corporate control of politics. She’s also never seen a war she didn’t like.

Even if Trump loses, we will need a strategy to fight against continued right-wing populism. A Clinton Presidency overseeing US capitalism in decline will provide more political space to racist and sexist demagogues. The Democratic Party won’t be an effective tool to fight against this phenomenon. We’ll need a working class centered movement that builds protests and direct action against racism while also linking up with demands for better wages, schools, healthcare, green jobs and women’s rights. The movement against a reactionary agenda would be strengthened by having independent candidates who refuse to take a dime in corporate cash.

The Spectre of Sanders

Trump referenced quotes from Bernie Sanders over and over throughout the debate. He’s trying to build up his anti-establishment credentials by tying himself to Sanders’s ability to mobilize young people and working people against the corporate domination of society. Clinton waxed nostalgic about her primary contest with Sanders even though the Democratic establishment used every dirty trick at their disposal to beat Bernie.

In the final weeks of Bernie’s campaign, Socialist Alternative member and Seattle City Councilmember Kshama Sawant initiated a petition for Bernie to run all the way to November as an independent and for launching a new party for the 99%. The petition got over 125,000 signatures, showing a desire for an alternative. Unfortunately, Bernie didn’t take up this call, and he has supported Clinton, giving left cover for her Wall Street speeches while putting forward the failing strategy of trying to reform the Democratic Party into a useful tool for working people. The “political revolution against the billionaire class” can’t win in a party thoroughly controlled by billionaires.

If Sanders had made the correct choice to continue his campaign as an independent, then he would likely have gathered the 15% in the polls necessary to participate in the debates. In that situation, Bernie would have been able to effectively cut across Trump’s demagoguery and also expose Clinton for being an establishment defender of war, Walmart and Wall Street. An independent Bernie run would have been a huge step towards establishing a new party of the 99% with a mass base provoking a crisis in the ruling class and giving tremendous confidence to union members and Black Lives Matter activists.

Understandably, many women, youth, workers and people of color are horrified about the prospect of a Trump presidency and will vote for Clinton as the “lesser evil.” We should not mistake this as enthusiasm for Hillary. Millions of people voting for her realize that she’s an establishment politician, and they know that they can’t depend on her to win fundamental change.

Activists voting for Clinton have raised fears that a Trump presidency would mean repression against social movements that would make it nearly impossible to build successful struggles. There is no doubt Trump would look to sharpen state repression against opposition movements. However, one of the main reasons the ruling class oppose Trump is because they understand that the clumsy uses of blunt state repression would blow up in their face. In reality, a Trump inauguration would be greeted with one of the biggest protests in history, and movements would intensify from there.

We should remember that the Obama administration oversaw coordinated police repression across the country with Democratic mayors ordering militarized police to destroy Occupy encampments. The Democratic Party has run most big cities in the U.S. for decades as police violence against black people went unchecked. Under Democratic mayors, Black Lives Matter protesters have been shot with live ammunition and rubber bullets while facing off against cops. We would certainly see a continuation of these policies under Trump, but resistance would continue against racism and inequality.

2017 will be a year of increased movements no matter who loses the election. To win these struggles, we’ll need strategy and demands that can mobilize people into action. BLM is the most dynamic social movement and Shaun King’s proposal to launch massive boycotts in December of cities and companies which have particularly egregious records in maintaining institutional racism could be an important step forward. For these struggles to be victorious, we need to be clear about the role of the Democratic Party that seeks to keep our struggles in “safe” channels that don’t expose politicians or challenge the capitalist system that breeds exploitation and oppression.

The strongest left challenge to the two main parties in this election is Jill Stein from the Greens, and Socialist Alternative is supporting a vote for her. Despite Clinton’s commanding lead, Stein has been shunned by the left union leaders and prominent progressive figures that supported the Sanders campaign (with the notable exceptions of Cornell West and Seattle socialist city councilmember Kshama Sawant). While there is a tremendous political vacuum on the left, the cowardice and mistaken strategy of key progressive leaders have resulted in the Stein campaign being marginalized. Still, the strongest possible vote for Stein can give confidence to the movements and organizations fighting for a left alternative.

After the elections, explosive struggles will continue to provide opportunities to win victories that improve the lives of working people. Together with Black Lives Matter activists, Socialist Alternative and Kshama Sawant recently built a movement that stopped a proposed $160 million militarized police bunker from being built in Seattle. This success shows the power of social movements linked up with independent working class politics and a socialist approach to changing society. Struggles like these can lay the basis for the new party of the 99% that was so desperately missed at the first two Presidential debates.