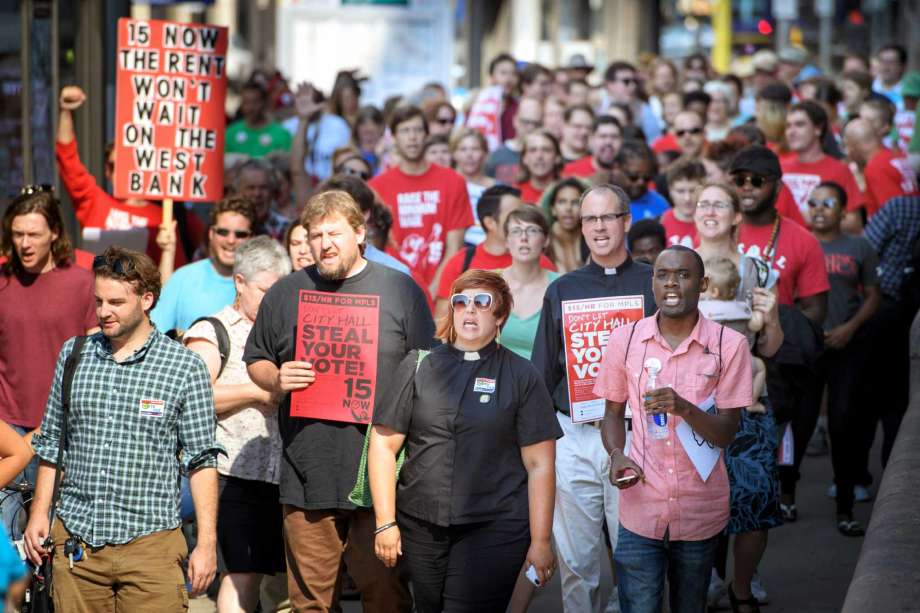 While this is a setback, we still forced $15 on the agenda – and it’s here to stay.

The Minnesota Supreme Court sided with Minneapolis Mayor Betsy Hodges, the City Council, and the Chamber of Commerce to strip Minneapolis of the right to vote on a $15 minimum wage. While our charter amendment is blocked, the fight for $15 in Minneapolis is far from over. We forced the council to open a debate about an ordinance by the second quarter of 2017. The Supreme Court’s decision affirmed that the Minneapolis City Council has the power to pass $15 an hour as an ordinance at any time. Now, more than ever, we need to keep up the momentum to demand the council pass our proposal for $15 as an ordinance.

For decades, they ignored poverty wages in Minneapolis, but we kept organizing and we forced them to take notice. Then they said $15 an hour was unrealistic. They fought back with everything they have, taking the issue to the conservative State Supreme Court. This morning, we demanded that Mayor Hodges and Minneapolis City Council drop the appeal, but they refused to even consider it. The fact that they are threatened by this fundamentally shows how strong we are. But we kept organizing, and we’ve paved a path to win $15 an hour!

We have terrified big business and the political establishment in Minneapolis. Our grassroots campaign has already won the public battle over the hearts and minds of the people to end poverty wages. 68% of Minneapolis residents support our charter amendment. The same poll showed a stunning 83% of African Americans and 74% of women voters support our proposal; groups that are disproportionately affected by poverty wages. Big business knew we would win, which is why the DFL controlled City Council and Mayor Hodges worked overtime to block a popular vote on $15, even going so far as uniting with Republican Justices at the Minnesota Supreme Court.

The Minnesota Supreme Court has a long track record of siding against working people. One Minnesota Justice was even Donald Trump’s potential choice to replace Antonin Scalia on the U.S. Supreme Court. This did not stop City Hall from relying on this court when it seemed clear $15 an hour would win at the ballot. City Hall even welcomed the Chamber of Commerce as an ally on the appeal, allowing them to file their own separate legal argument to block $15 an hour from voters. Why did they go through all this trouble? To defend powerful corporations like Target and Best Buy, who want to keep making massive profits off the exploitation of working people in Minneapolis.

We started this campaign for simple reasons. 62 families own as much wealth as the bottom half of the world’s population. The CEO of Target makes $11,000 an hour, while the average retail worker makes around $10 an hour. The Twin Cities are home to 17 Fortune 500 companies – the highest concentration in the country – yet also the worst racial inequities in the nation. Passing $15 an hour will be an economic opportunity for over 100,000 Minneapolis workers, and it would put almost a billion dollars back into pockets of low-wage workers each year – that’s what the City of Minneapolis just stole from voters. We’ve come so far, but now we need to continue the struggle.

Through determined organizing, low-wage workers have dramatically changed the political landscape in a few short years. In 2012 the first fast food workers went on strike demanding $15. In 2013, Minneapolis City Council Members refused to even explore raising minimum wage. Then low-wage workers won $15 in SeaTac, a suburb of Seattle. In 2014, 15 Now formed in Seattle and led a movement to make it the first major U.S. city to pass $15 an hour. Since then, dozens of cities have followed suit. Now a majority of Americans support a $15 an hour minimum wage, and it’s commonly accepted as an important policy in cities with high costs of living and poverty rates, like Minneapolis.

While the Supreme Court’s decision blocks one path to $15, low-wage workers have already blazed another. It’s now widely accepted that Minneapolis has the power to pass our proposal for $15 as an ordinance. In fact, City Council passed a nonbinding resolution to pass a minimum wage ordinance, but failed to set a dollar amount or time frame for implementation. Because of our movement, 68% of Minneapolis residents support our reasonable proposal, $15 an hour for big business by 2020 and small business by 2022. Make your voice heard on September 12, and demand City Council pass our proposal for $15 an hour.

Let’s regain the momentum and keep $15 on the agenda by organizing a mass rally on September 12th. Let’s show City Hall and the Chamber of Commerce that while they won this round, the fight is far from over.