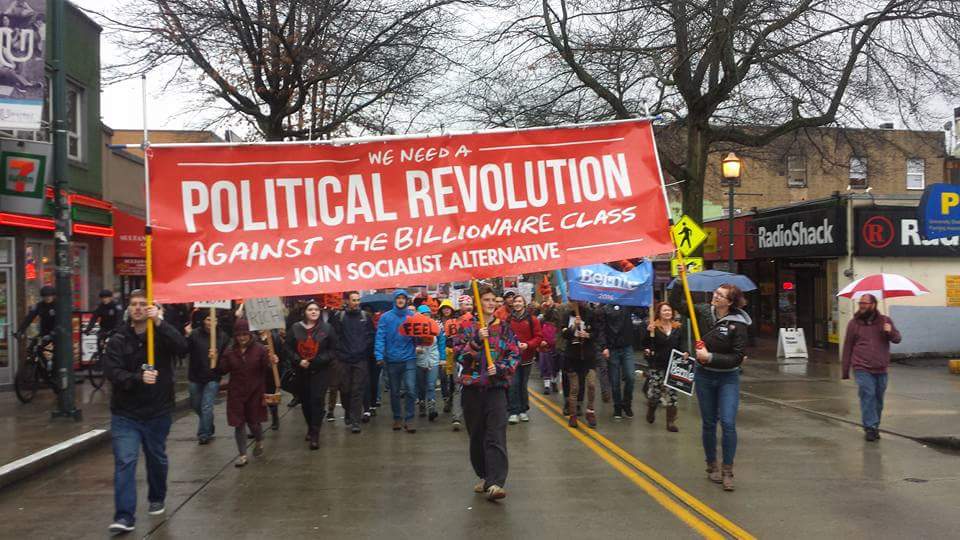 We live in exciting times. A new wave of struggle is opening up and the 99% is reestablishing its voice. Like our forebears in the 60s we are shaping the political landscape; we are making history. From OWS to the fight for $15 and Black Lives Matter there is a new mood. Many are rejecting politics as usual and are determined to fight for an alternative. This culminated in the last year with the electrifying presidential campaign of self-described democratic socialist Bernie Sanders that brought socialism back into the mainstream debate. And now there are many, especially young people, that realize we need an alternative to capitalism and consider themselves socialist.

Building A Party of the 99%

The broad shift to the left in social and political attitudes in society over the past period has forced issues like racial and economic equality, environmental destruction, tuition free college and breaking up the big banks onto the agenda. This demonstrates our strength when organized, but to ensure that working people win we need fighting unions and sustained movements that don’t demobilize during election season because its not “convenient” for the Democrats.

A new broad party of the 99% is desperately needed that not only runs progressive candidates but offers a common space where all the struggles of working people, women, black people, LGBTQ people can join forces and sustain the fight on a day to day basis. Elections and elected postions won’t be the end goal but rather tools to raise the demands of working people.
Socialist Alternative member Kshama Sawant ran for a city council seat in Seattle in 2013 to put these ideas into practice. As a working class candidate independent of the two major parties she was able to win not once but twice. Immediately after her first victory we used her position to launch an independent grassroots campaign, 15Now, with the support of unions, community organizations and activists . We won the first citywide $15 an hour minimum wage six months after she was elected and the demand spread all across the country.

Imagine this on a big scale. Imagine BLM, the youth for tuition free college, environmental activists, the unions fighting for decent jobs and community organizations for affordable housing, all joining forces on a national level with a common voice, in a common party of the 99%. The strength of our voice will be multiplied exponentially!

Such a tool in the hands of working people will elevate our political revolution to the next level where candidates and movements will be one. New formations of that kind are arising in other countries around the world and in U.S. the political environment has not been more ripe for such a step in a long time.

The Role of Socialists

But for Socialist Alternative winning reforms is not the end of the road. For many, including Bernie Sanders, socialism means to reform capitalism. We believe in fighting for all possible advances under capitalism, but to win real, lasting change we need a fundamental social transformation. We see the struggles for immediate reform not as the end goal but first and foremost as a way to increase our confidence to fight for more.

Socialists see the working class as the key force in the fight to transform society because of its social power based on its numbers and its ability to shut down the economic engine of capitalism through strikes. But for the working class to win it must champion the fight of all the oppressed against injustice and actively work to cut across divisions based on race, gender or country of origin. Socialists seek to build a bridge from the day to day struggles to an understanding of the need for socialism. That broad vision will allow us to turn apparently simple demands into the beginning of a broad movement that can transform society.

Through history this has been a key strategy galvanizing the struggles of working people across the world. Today socialist ideas are equally important. The existing political vacuum will be filled by right-wing populism if the left can’t provide an alternative. A party of the 99% can cut across this development but if it falls in the trap of trying to reform the system piecemeal it will ultimately reach a dead end.

We need a well-organized and consciously socialist wing inside this party that connects the struggles of the present to the need for fundamental change. And that’s the next challenge of Socialist Alternative, to develop into a party of several thousands that can become this socialist wing, ensuring not only the survival but the victory of the U.S. party of the 99%. If you want to be part this join us today.

Marxism and Science: The Legacy of Richard Lewontin