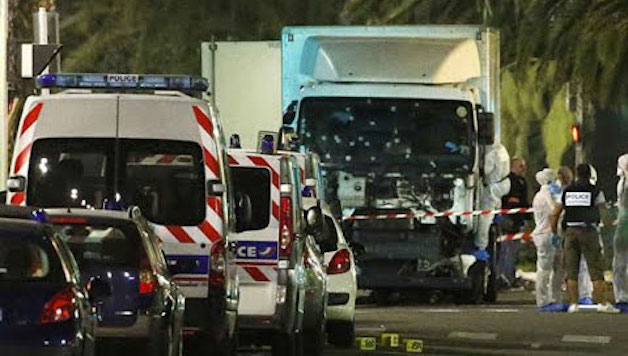 No to Hatred, Suspicion, and Racism: Don’t Let Us Be Divided!

What happened in Nice on Thursday, July 14, was an appalling act. The truck driver intended to cause as many deaths as possible, driving wantonly and colliding with the maximum number of people on the Promenade des Anglais after the fireworks display, and once more it is the innocent who suffer.  We condemn these attacks and the mindless cowardice which drives them. These are our brothers and sisters who have died, workers on holiday, tourists, foreign visitors, relatives, pensioners, irrespective of their origin or their culture.

Was it planned or not ? What was the psychological make-up of the man at the wheel of the truck? As yet we know nothing, but we all feel the same: sadness and rage.  Whether it was an isolated individual, ISIS, or some other group who will claim the attack, we must make it clear that the methods employed are the same as those employed by fascist groups, by dictatorships, by armies of occupation.  Eliminating defenseless people in cold blood points to a far right ideology, whether a religious or some other pretext is offered.

Nothing can justify these wild and barbaric attacks in Nice, nor the ones in Baghdad last week in which 292 people lost their lives, nor the attacks in Istanbul on the June 29.  Groups like ISIS, or those who lay claim to these attacks, are incapable of winning support from any section of the population.  Not here, certainly not among Muslims, and not anywhere else either.  These barbarians cannot claim that they are fighting in a war waged by France or the United States.  In reality all over the world there are mercenaries and gangsters who run these groups, whether in France, Belgium, Iraq, Libya or Nigeria.  Moreover their methods are intended to prevent any organised opposition to the brutal, medieval regimes they seek to establish.   And if civilian deaths resulting from these attacks can cause people to despair this is also true of the civilian deaths caused by imperialist bombs. The politics of terror merely reinforces the ruling classes by creating a climate of fear, hatred and  suspicion.

State of Emergency – the Answer’s Still No!

Once again the sadness and rage which follow these atrocities are exploited by the government and the various political parties who support the capitalists as they attempt to divide us. Neither the extension of the state of emergency, nor the mobilization of 500 000 reservists, can ensure our security. The state of emergency has never been a way of preventing terrorist acts.  It was introduced in November 2015 and now extended for a further three months.  But it didn’t prevent the deaths of a further 84 people yesterday.  The state of emergency cannot offer us genuine security.

Instead, it is a real weapon in the hands of Valls and Hollande, allowing them ever since December 2015 to put a damper on mass mobilizations, initially against the COP 21 demonstrations, and later against the mass social movement over the employment law, by attempting to ban demonstrations and restrict those campaigning against their policies.

We refuse to accept what those committing these attacks want to impose upon us, namely a feeling of fear.  Terror is a political weapon which is aimed at preventing workers’ unity, forcing inaction through fear and reinforcing racism.  We won’t allow ourselves to be intimidated or divided !

Unity of Workers and Youth Against Barbarism and Racism

We refuse to leave our security in the hands of the Valls- Hollande government or the politicians of the Front Nationale.  Their policy consists of imposing a real social counter-revolution, permanent social insecurity, as exemplified by the employment law. We end up living on the edge, with lousy pay, insecure jobs and unemployment.  This is a real breeding ground for all kinds of violently reactionary ideas, which feed on poverty and lack of hope for the future under capitalism.

Those who have dared to equate demonstrators against the employment law, trade unionists and terrorists would do well to apologize immediately.  In reality no government or terrorist group is stronger than the unity of workers and young people in mass struggle.  When there were a million of us on the streets, on 31st March and 14th June, united in our fight against the politics of a government attacking the rights of every worker in France – that’s when we were strong.  Joint struggle is the only way of preventing people from lapsing into despair.  That’s how we can fight the roots of terrorism, division and racism.

For a real struggle against terrorism and hatred we must unite and fight the policies which feed them.  It’s only by fighting against capitalism, a system where the whole of society revolves around the profits of a handful of people who live on the backs of the majority, that we can eradicate the sources of barbarism and ensure a secure and decent future for everyone.  Another society is possible and necessary – socialism.

Québec and the October Crisis of 1970